When Abby Rolf first stepped through the thick live oak tree line that surrounds Ayavalla Land Company, she dubbed it a place for dreamers.

Rolf, a 35-year-old organic farmer and Minnesotan, now makes annual pilgrimages to Ayavalla as part of the Worldwide Opportunities on Organic Farms (WWOOF). This global organization pairs volunteers from around the world with partnering farms that are pioneering a shift toward sustainable agricultural practices. In exchange for room, board and an educational experience, WWOOFers commit to an average of 20 hours of hands-on labor during the course of their stay at the farm.

Were it not for a smattering of documentaries and a since-ended relationship, however, Rolf might have never stumbled across the sprawling Tallahassee farm that she now considers a second home.

“I was exposed by documentaries to the importance of self-sufficiency,” Rolf said. “I was living in the metro of Minneapolis/St. Paul, and I started to just feel emotionally taxed. I began to reframe and look at my life and realized that the rural roots were calling to me. It started as an interest in self-sufficiency and the skills around that, the know-how to survive.”

Roughly six years ago, she fled the city with reckless abandon and found work at a nearby organic farm. Solace could be found in the soil there. Consumerism could be pruned like citrus trees. Still, Rolf found herself hungry to know more. At that time, Rolf’s partner worked for Worldwide Opportunities on Organic Farms, vetting participating WWOOF farms to ensure they were meeting WWOOF’s standards for sustainability and sufficient accommodations. Together, the two visited every WWOOF farm in Florida, and as her partner inspected the facilities, Rolf took some notes of her own. 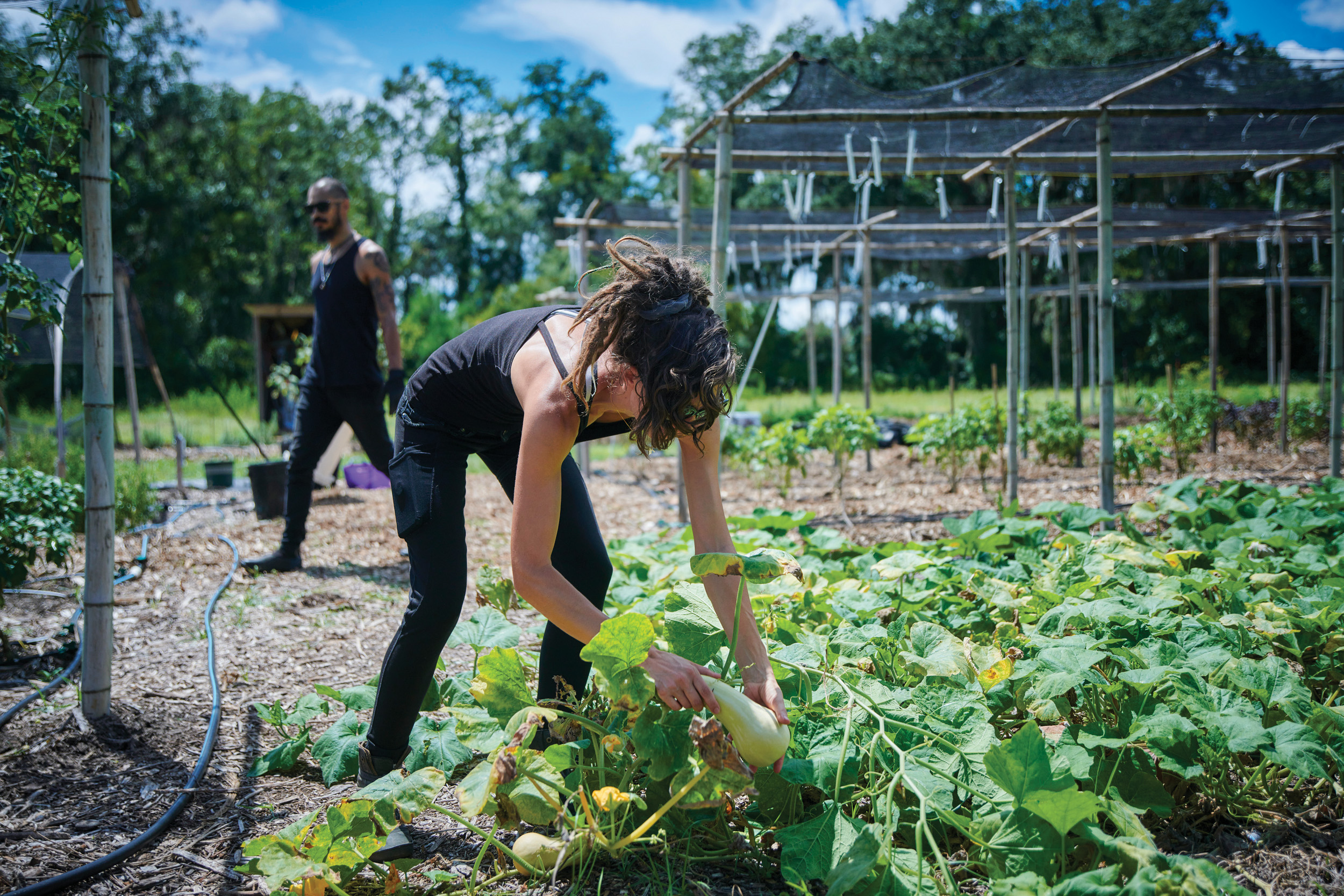 Brooke Gregory picks a butternut squash ready for harvest. Shaded trellises at the rear of photo are used to support tomato plants that are pinned to strings with plastic clips. Branches are pruned so that plants devote more energy to producing fruit. Photo by Dave Barfield

“Ayavalla was my No. 1 most favorite,” Rolf said. “I will be going back for my fourth season this winter. The 12,000 acres of land are just magical. There are bass fishing ponds out there, and I am addicted to the sport of fishing.”

It wasn’t all about the scenery or the fishing, though. Rolf came to work and to learn. Despite her own years working on organic farms, she still considers herself a novice, and Ayavalla proved to be fertile ground for her continued education. While Ayavalla’s market garden, Pathways Garden, is not certified organic, Farm Manager Laura Phipps and the rest of the Ayavalla team take a chemical-free approach to everything from their produce to their large, grass-fed cattle herd.

“Laura is a great educator,” Rolf said. “She cares. She wants you to be enriched by this experience as well. I think that speaks a lot to Ayavalla and the Phipps family. It’s a very powerful place.”

In place of chemical-rich fertilizers and pesticides, Ayavalla employs strategies of biodynamic farming and permaculture, or the development of a self-sufficient ecosystem, through practices like regenerative grazing, companion planting, hügelkultur and environment-determined planting schedules.

“Like anything else, you learn as much as you teach,” Phipps said. “You get so many different people from different places who have different backgrounds. It’s collaborative. There are some you learn more from than others, but it’s all good. I’ve had people who were really good at composting or really good at tomatoes.”

Not all WWOOF farms are alike, Phipps explained. She almost exclusively works with WWOOFers who are prepared for a long-term commitment of about three months, but other farms will accept volunteers for as little as a week. 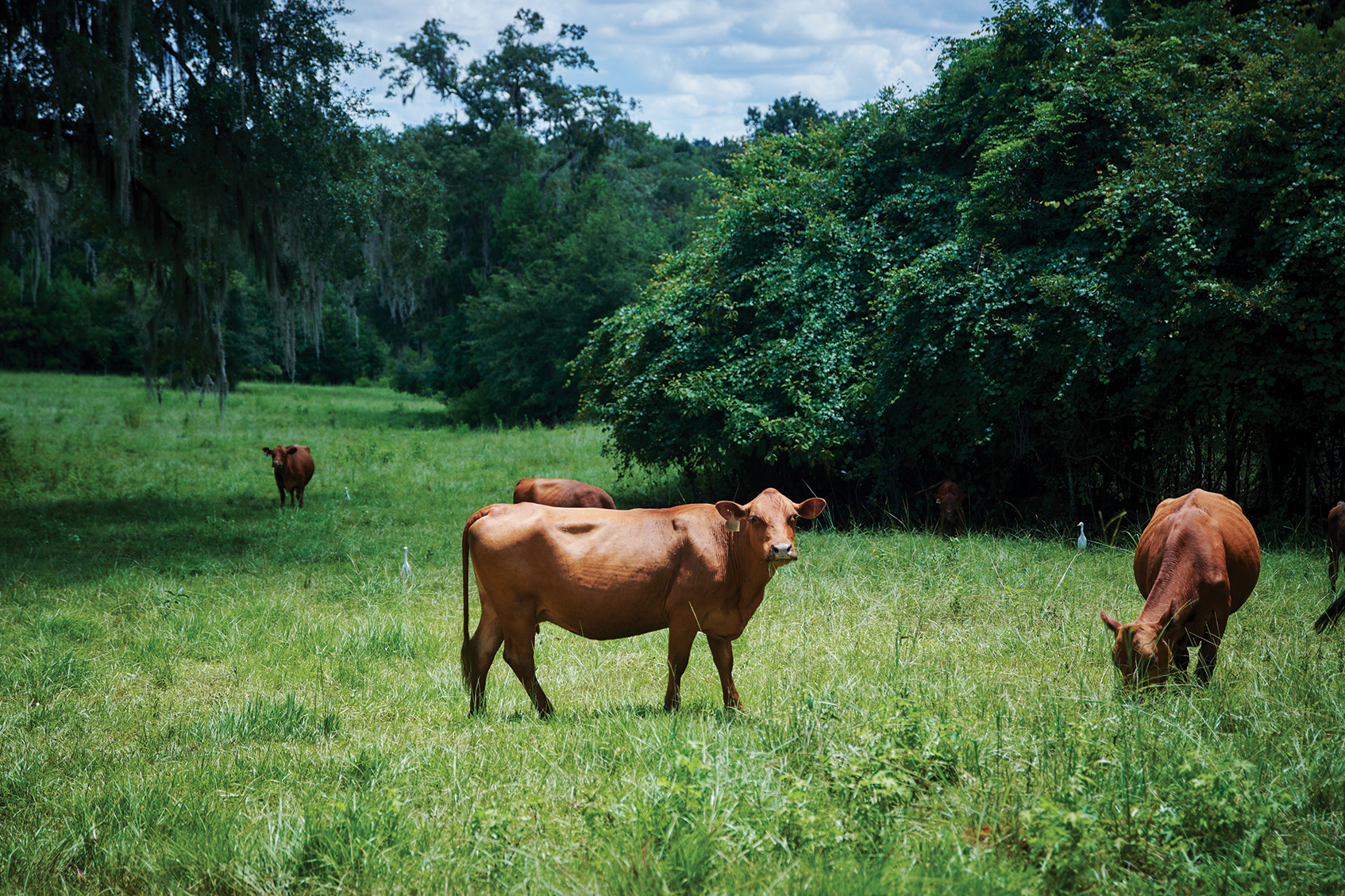 “I try to pick the volunteers that have some background in farming because, honestly, farming in the South is hot and humid and nasty,” Phipps said. “They may have this idea of gardening, but they just can’t hold up, so I try to get people who have farmed or gardened before. I have a couple from Canada, a lot of people from the North. They come from Europe; they come from everywhere. I’ve got a medical doctor who recently applied, searching for a break from his professional practice.”

As Rolf describes it, there is a nomadic culture and spirituality associated with the WWOOF program — venturing out, sometimes months at a time, to a strange and beautiful land to connect with nature and enjoy the fruits of labor.

“I think everybody learns something, but a lot of people consider it a vacation, too,” Phipps said. “It’s a pretty place to be. Some of them are writers, some are artists, and it’s nice not having to pay your bills, but you have to put in the hours.”

Ayavalla typically takes on multiple WWOOFers at a given time, and Rolf has found the experience of connecting with people from different walks of life to be one of the most valuable and unexpected aspects of the program.

“One of the most attractive memories is being in the church, i.e., cafeteria or chow hall, and being with such a variety of people from all walks of life breaking bread together: Spanish speakers, different cultures, folks from different countries, this communal energy surrounding a meal and talking about our lives, our goals. That was very impactful to me. Truly, that cafeteria is a big, big draw.”

Every Sunday night, Rolf said, the WWOOFers get together and play volleyball outside the church, sometimes late into the night. And her newfound community stretches beyond the farm into Tallahassee and down to the coast.

“Tally is a great community,” Rolf said. “I love its art scene, the music and the parks — the Apalachicola Forest and being so close to the Gulf. I’m a social person, so I have developed a little community down there. I go down the St. Marks trail once a week with my retired friends, and we bike the whole thing. I have made friends in Panacea that work on oyster boats who will take me out on the water with them. I like to experience the farmers markets there and check out that live music. Some weekends, Laura will even take us canoeing on the Wacissa River. I’m really active in the community there. I just love Tally.”