Stats of the Season

From Thanksgiving through the holidays and into the New Year … here are a few fun facts to enjoy. 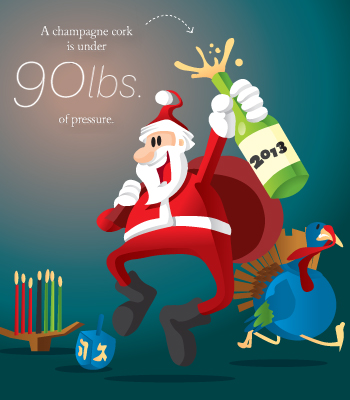 1621 The first Thanksgiving is celebrated by the Plymouth Colony. It lasted three days.

149 years ago, President Abraham Lincoln proclaimed the fourth Thursday of November as a national holiday and day of Thanksgiving.

421 The population of Turkey, Texas

248 million turkeys were raised in the U.S. in 2011. An estimated 46 million were consumed on Thanksgiving Day.

16 pounds The average weight for a turkey consumed on Thanksgiving last year.

2 billion boxed and individual Christmas cards were sold in the U.S. last year.

331,038 The number of Christmas lights at the home of David and Janean Richards of Australia. It set a Guiness world record in 2011.

1.76 billion candy canes are produced in the U.S. each year.

Nine candles are on a Hanukkah menorah. Eight are the Hannukah candles, representing the eight days of celebration. The ninth is the “assistant candle,” used to light the others.

1966 The Kwanzaa holiday was created and is celebrated by an estimated 3 million African-Americans in the U.S.

A champagne cork is under 90 pounds of pressure.