Cranes On the Plain

At 6:30 a.m. in Kearney, Neb., the temperature is well below freezing. An almost-full moon has cast light over the Platte River, and I can barely make out what appear to be a number of large islands in the river. I’m standing in a fully enclosed viewing blind with 30 other photojournalists, waiting. The blind protects us from the elements but is not heated. Nebraska in March is cold … very cold.

I had been invited to Central Nebraska to experience one of the great migration stories on earth … that of the Sandhill Cranes. We have approached the river under the cover of darkness to prevent spooking the cranes. With cameras (no flash), scopes and binoculars in hand, and dressed in dark clothing to help us blend in walking to and from the blinds, we waited for dawn to arrive.

Shhhhhhh … no talking. Whispers only. Otherwise, we might startle the birds into a panicked and potentially disastrous departure. Also, part of the experience is listening to their sounds. Cranes are noted for their exceptional bugling calls, made possible by their especially long windpipe, sometimes heard up to three miles away.

Nearly 600,000 cranes, representing about 80 percent of the world’s population, descend and depend upon the Platte River somewhere around mid-February as their spring staging area for travel up north. They’ll reach peak numbers around mid-March and depart by April 15. The Platte Valley is ideally located along the Central Flyway migration route that takes the cranes from their wintering residences in the southern United States and Mexico to their breeding grounds in Canada, Alaska and even Siberia. A few of the endangered whooping cranes as well as eagles, ducks, snow geese and shorebirds are among the other wildlife that migrate along this same route. 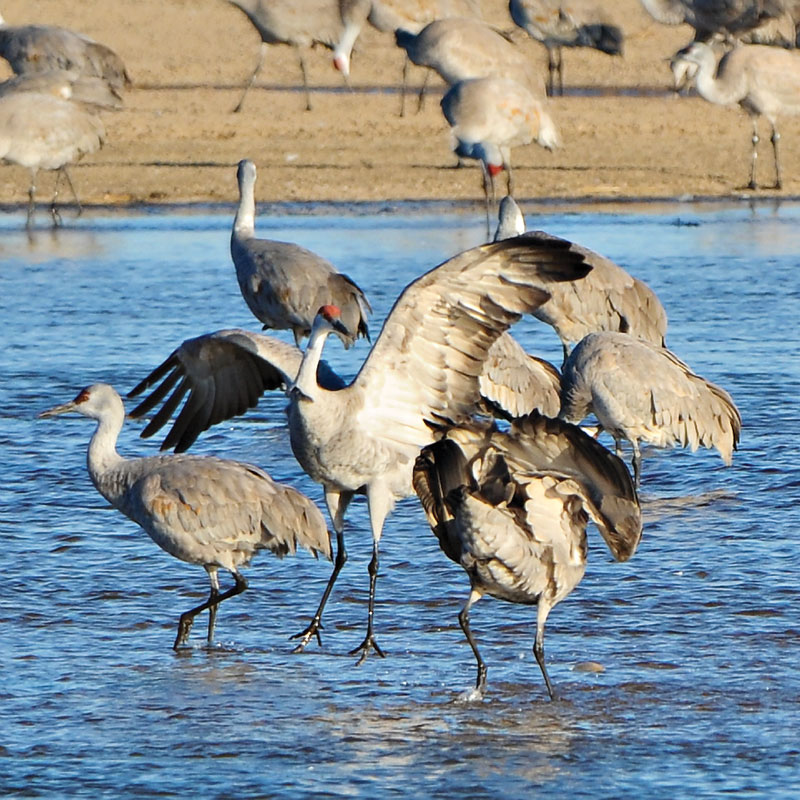 Sandhill Cranes are living dinosaurs. Fossils of wing bones have been discovered in this part of Nebraska. The species has survived because of its complex social behaviors, long-term care of its young and adaptability. Cranes have been around for 60 million years, the longest successful tenure on earth. In fact, the Sandhill Crane is the oldest living bird species and has remained virtually unchanged for the last nine million years.

The Platte River Basin is the only ecosystem along the migration route that fulfills all the requirements for roosting, resting and restoration. So the stopover is necessary for them to build up fat reserves necessary to sustain the cranes as they make their way through the strenuous nesting season up north. Each crane will add some 18 to 20 percent to its body weight by feeding on waste corn in the surrounding fields. Estimates have it that they will eat over 80 percent, or up to 1,600 tons of waste corn as the main part of their diet. The other 20 percent is found in the meadows in the form of seeds, grubs, worms, snails, small reptiles and rodents adjacent to the river.

As the dawn broke and my eyes adjusted to the grayness, I realized we were not alone. What I thought were islands in the river were, in fact, upward of 50,000 cranes. They spend each night “roosting” on the shallow sandbars in the open channels of the river protected from possible predators like coyotes. The channels will normally be 500 feet wide with water depths of 6 inches or less. We’re told not to attempt to approach the birds on their roosts as one alarm call from a bird can send the entire flock into panicked flight, using up precious energy reserves and exposing the birds to hazards such as power lines … not to mention ruining the viewing experience of the many other visitors. At this time of the morning, the cranes shuffle up and down the river waiting for the sun to rise. Then, as the sun appeared over the horizon, the cranes began their day’s journey to feed and loaf in the surrounding fields. They lift off in waves, a systematic departure that really caught my attention. It was almost like a designated leader of a specific company of cranes would give the command to leave. Then, in roughly five-minute increments, other such groups would receive their “signal” and lift off for the fields located within a three to eight mile radius of the river.

During the day when they are not feeding, the cranes “dance” to relieve the stress of migration and strengthen their pair bonds. Cranes are monogamous and tend to pair when they are 3 to 6 years old. They have an elaborate courtship to help synchronize breeding readiness. Considered to be the most accomplished dancers in the animal kingdom, their moves include head bobbing, bowing, arching, jumping as high as 5 feet, wing flapping, running and twig tossing.

Once the birds left the river, we drove along the countryside to view the cranes as they surveyed the fields for food. Even though it was a sunny and clear day, the sky appeared to have black cloudlike formations — actually thousands of birds seeking their field destination. Seeing those “dark clouds” made me think of what the French and Germans must have felt during the Normandy invasion in 1944 as the allied planes made their way across Europe. The cranes travel an average of six miles per day and spend the day feeding, dancing, loafing and, on calm clear days, they’ll also ride the air currents.

The cranes migrating along the Central Flyway can fly up to 3,700 miles one way to the Bering Straits and up to 5,000 miles one way to Eastern Siberia. They are not large birds, and to conserve energy for their long migration they use the thermals to gain altitude and soar with the currents until they find another thermal to lift them up again. Most will fly at an average of 3,000 to 6,000 feet but have been known to reach 13,000 feet. During their migration they’ll fly between 200-400 miles per day at about 38 miles per hour depending on the wind and weather conditions.

As sunset approached, we returned to the blinds to see the cranes return to the Platte River to roost. And in thousands of groups ranging from three to 300, they made their way back to the day’s starting point with such intense bugling, the sound has been indelibly etched in my mind forever.

It’s now 6:30 p.m., a full 12 hours from when we started. There is no question: The arrival of the cranes on the Platte River and the millions of other migratory birds that visit this area each year is one of the greatest wildlife spectacles on the continent. This witness to one of the world’s great migrations has been an experience I will never forget.