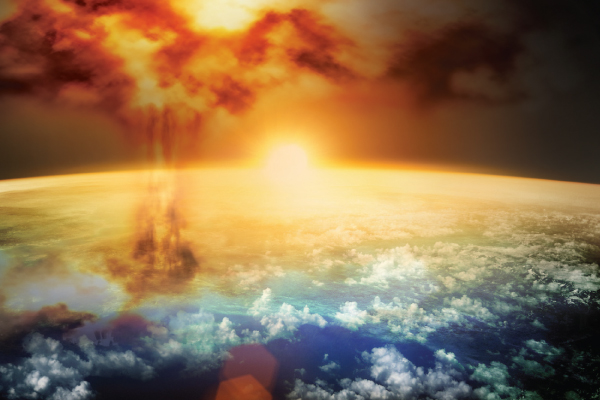 The end of the world?

According to the Mayan calendar, 2012 is the end of time. On December 21, the world is expected to come to an end in something resembling the cataclysm witnessed in “2012,” a disaster flick which also went down in flames. How the real “doomsday” will go down is anyone’s guess, but there’s no reason to go into The Big Finis unprepared. With tongue firmly planted in cheek, here are some things to consider as the Big Checkout looms:

1. No Zombie Flash Mob for You! Despite the earthquakes, enormous tidal waves and gaping plot holes, law and order must be maintained. Don’t drive drunk, don’t go looting and pillaging, don’t overthrow the government, don’t buy up all the gas and water or cause any other kind of mayhem. It won’t mean anything in The End.

2. Update Your Status You know, you could spend your final moments down at the church gettin’ right with the Lord. Chances are, though, you’ll be head down in your smartphone tweeting and Facebooking. Don’t deny it! For goodness sake, though, try for something original. What not to say: “It’s the end of the world as we know it, and I feel fine!” Now hurry up, before your carrier cancels your unlimited text and data plan.

3. The Last Supper I don’t know about you, but nothing says “Armageddon outta here” like a fine last meal. And, like me, you’ll agree that at some point a final evening at the local steakhouse will be in order. (Hopefully the chefs will still be on the job.) But don’t stop there. Head over to your favorite adult beverage establishment for a few last rounds. Best part of all: No hangover!

4. Look Your Best There’s no excuse for not looking cool and dignified as the planet collapses around you, so run down to your favorite haberdashery for some new apparel. Go ahead and splurge! After all, Doomsday is all about making a final statement. Speaking of final statements, you won’t be getting one of those from VISA, so max out the charge card while you’re at it.

5. Quit Your Job If you haven’t already been released in the lead-up to the Final Time Card, now’s your chance to tell that squinty-eyed, flat-topped boss of yours to take this job and … well, you know.

6. Play The Lottery Who knows? Wouldn’t it be ironic if …

7. Shelter in Place Don’t even bother trying to leave town. Planetary catastrophes are no time for a desperate road trip home. First of all, anything resembling a road will already be jammed up with other crazed evacuees trying to reach loved ones across town or across the state. Second of all, there won’t be any open gas stations, and that means the highways will become parking lots. Your best bet? Stay home. Phone Mom. Snuggle with the wife and kids. Or, if it makes you feel any better, stand on your roof and shout defiance to the cosmos. Your choice, but just remember: There’s really no place to go.

8. Circle the Wagons You’ve been stockpiling food, water and other provisions for years in anticipation of an earth-shattering disaster. Now that it’s actually happening, your less-than-prepared neighbors are coming for you in zombie-like waves. No need to go all “Resident Evil” on them. I say let ’em have it. Literally. It’s not like you’re going to be able to eat it all anyway.