A heavyweight award with a Tallahassee connection. 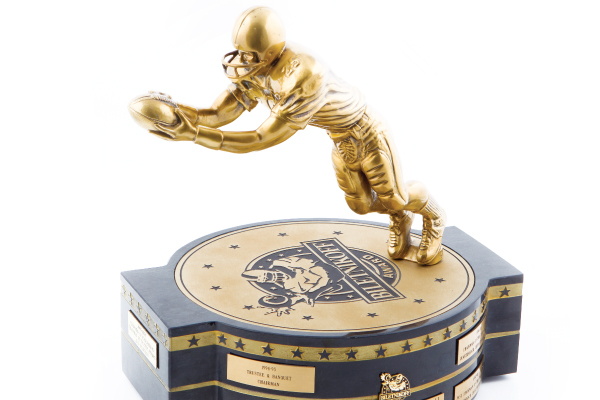 Created in 1994 by the Tallahassee Quarterback Club Foundation, the Biletnikoff Award is presented annually to the nation’s outstanding college receiver and, with the emergence of the passing game in recent years, it has become one of the most notable awards in college football. Each year, the award winner is announced as part of ESPN’s The Home Depot College Football Awards Show.

» The Tallahassee Quarterback Club Foundation provides college scholarships to students who excel in academic and extra-curricular activities in spite of significant challenges in their lives. In 2013, the Foundation is expected to provide scholarships totaling more than $640,000.

» The trophy itself has been honored, including Best Trophy award, at the Awards and Recognition Association’s 1998 International Award Market.

» You can see the trophy at the University Center Club where it is part of a display of memorabilia relating to the Biletnikoff Award.

» The award can be given to any Division 1-A player who catches the football — tight ends, slot backs, wide receivers or running backs.

» The winner was announced Dec. 6, 2012, and the award will be presented to the winner at a Feb. 9 banquet at the University Center Club that is expected to draw 550 people.

» Former Miami Dolphin and New York Giants fullback Larry Csonka will be the keynote speaker at the 2013 Biletnikoff Award banquet. Csonka, inducted into the Pro Football Hall of Fame, contributed to the Miami Dolphin’s three Super Bowl seasons during the early 1970s, including the famed perfect season in 1972.

» The winner is also given the Biletnikoff ring, a daily reminder of his achievements. A Biletnikoff Award pendant is also given to the award recipient, who customarily presents it to a woman who supported and stood by the recipient throughout his football career.

» The Biletnikoff Award trophy features an 18-inch-tall antiqued gold figure of a player reaching out to catch a football sitting on a base of solid marble that is 4 inches thick and 14 inches wide.

» Former FSU receiver Matt Frier posed for the statue, which was created by Tallahassee wildlife artist Jonathan Livingston, who said in a 1997 Tallahassee Magazine story that, before the commission, he rarely painted people and had never sculpted.

» At 56 pounds, it’s the largest of all college football position awards.

» The Biletnikoff Award recipient is chosen by about 150 college football announcers, commentators, journalists, former players and previous winners of the award.

» No player from a Florida football program has ever won the award.

» The player is dressed in a uniform and helmet from around 1965, the year Biletnikoff, who is now 69, started his 14-year pro career with the Oakland Raiders.

Even though he’s just a sophomore, the 21-year-old has electrified Trojan fans with his dynamic play, finishing the 2012 regular season with 112 catches for 1,680 receiving yards (both Pac-12 season records) and 14 receiving touchdowns, plus a kickoff return for a touchdown.

The other finalists for the 2012 award were Stedman Bailey, a junior at the University of West Virginia, and senior Terrance Williams of Baylor University.