A Shadow of Apalachicola’s Past

Untouched for 70 Years, Sponge Grounds Off the Forgotten Coast are Reopened for Harvesting

Underneath the clear, shallow waters of the northern Gulf of Mexico lies an incredible community of sea life that once was a major contributor to the economy of Apalachicola … but we’re not talking oysters.

Like tumbleweeds on the desert, natural sponges dot the tall, rocky ledges beneath the beautiful Gulf waters between Cape San Blas and St. Marks. Untouched for nearly 70 years, these extensive sponge grounds were recently reopened for harvesting. A new generation of sponge divers and an Apalachicola sponge dealer are working to rekindle this unique industry and preserve its history.

Gerald (Jerry) Garlick, the only sponge dealer in Northwest Florida, shows off a recent harvest.

To say that the current sponge industry in Apalachicola is any more than a shadow of its former self would be a vast overstatement. In 1879 there were 16 boats in the fleet, just in Apalachicola. Today there are only two or three boats harvesting sponges in the northern Gulf and only six total.

In the late 1800s, sponges were Apalachicola’s most lucrative fishery. There were two sponge warehouses in Apalachicola, employing approximately 100 men. The waterfront was teeming with tough, mostly Greek, men unloading their sponges and taking them to the Apalachicola Sponge Exchange where the sponges were auctioned to dealers, who inspected the catch and made sealed bids. The sponges were later shipped to St. Louis, Baltimore, San Francisco and New York.

Today’s sponge industry in Apalachicola is a small niche market. Gerald (Jerry) Garlick, owner of Apalachicola Sponge Company, is the only sponge dealer in the Panhandle. He sells sponges, honey and antiques in his store and sells natural sponges wholesale all over the country to unique gift-type stores, spas and to those in the green market, like Tallahassee’s New Leaf Market. “I enjoy the creative niche that I’ve brought to Apalachicola. It’s one of the reasons tourists come here.” Garlick is also an expert on the sponge industry and its history. The historic Apalachicola Sponge Factory Exchange was the location of his first store and the inspiration for his current business.

Today Garlick’s Apalachicola Sponge Company is located in the historic district at 31 Ave. E. There he enjoys educating the public about Apalachicola’s sponge industry. He says sponge harvesting is similar in a lot of ways to the past, but there are some big changes. Sponge divers aren’t necessarily Greek anymore and, in rare cases, aren’t even male. A couple of brave women have dived into this previously all-male world. Tracy Kocjancic is one of only two female sponge divers operating in the northern Gulf.

Gone are the old heavy brass helmets and lead in the shoes. Today’s sponge divers wear basic skin suits or spandex in the summer and lightweight water shoes for protection. Scuba tanks only get in the way. Instead, a 300-foot tube pumps air from the boat to the diver. Kocjancic carries a serrated knife to cut the sponges, a bag to place them in and wears a 50-pound weight belt across her hips. While not as physically challenging as in the past, “sponge diving is not for the frail,” says Garlick.

To harvest a sponge today, the sponge is cut three inches from the bottom, leaving tissue that can regenerate. Divers also squeeze the sponges after cutting to release the spores by which they reproduce. They are then placed in a bag and raised to the boat.

“It’s hot, very hot. You spend several days out on the boat, no air conditioning,” Kocjancic laments. And you really have to watch the weather. Once you’re under the water, there’s a lot more to it than just cutting the sponges with a knife. “When I first started I had to learn how to figure out which way the tides were going. When I began I would just dust myself … sand and everything flying up and I couldn’t see. There’s a lot more to it than you think. If it was easy, everyone would do it.”

Kocjancic always wanted to be on the water and started off as a deck hand. But that’s not easy work either. According to Garlick, it’s a hot, stinky job. Boats can’t even come into port until the sponges are clean because the smell is so offensive. Once the sponges are cut and loaded onto the boat, they are covered with a tarp and the degrading process begins. The membrane that covers the sponge begins to rot and then is washed off, squeezed out and stomped on over two or three days. Once cleaned, the sponges are put in bags out of the way on top of the boat.

In addition to being a deck hand, though, Kocjancic wanted the challenge of being a diver. “I wanted to go beyond my boundaries. We’re not made to walk around down there on the bottom. It was a challenge overcoming my fear to get down there and see something new and experience the beauty of the Gulf of Mexico.” She says it shows how hard she can work. “I’m not into women’s lib. I don’t want to go burn my bra, but I want to do this.” In her eighth season harvesting sponges, Kocjancic loves bringing the sponges to market.

Florida’s tough, soft sponges are considered to be some of the best in the world. Divers harvest Wools, Yellows, Vase or Curios sponge grass, Knobbie, Lettuce, Finger and small flower-like Mermaids’ Purse sponges. Sponges from the northern Gulf, like the Rock Island Wool, are denser than other Florida sponges because of the colder water. Many of them are harvested just off of Dog Island. They are much stronger, more durable and more absorbent than synthetic sponges. 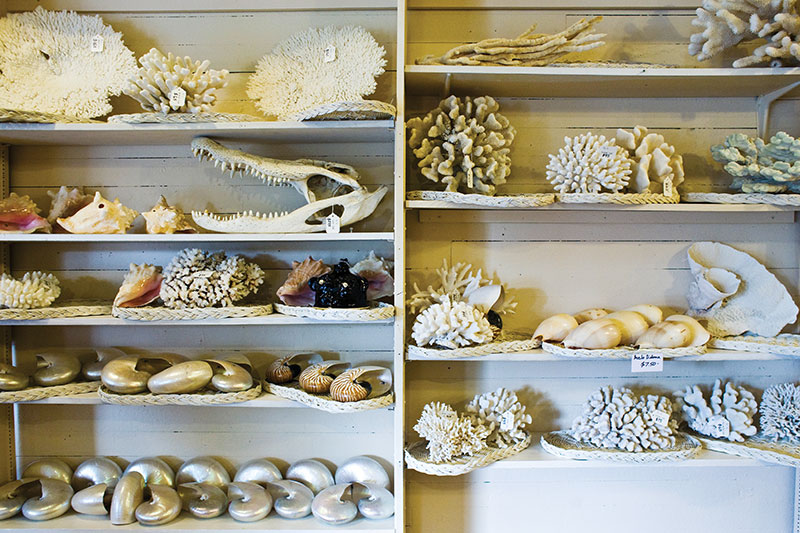 A shelf in Garlick’s store, Apalachicola Sponge Company, shows off the different types of sponges, shells and coral found in the northern Gulf.

In 1939, sponge harvesting was banned in the northern Gulf waters due to Red Tide and over-harvesting. In 2007, the Florida Fish and Wildlife Conservation Commission (FWC) extended the area where harvest of commercial sponges is allowed by diving from west of 84 degrees west longitude, near Cabell Point on the eastern border of Jefferson County, to Cape San Blas.

Kocjancic says that on a good day they can harvest about 200 sponges. Harvesting begins for Kocjancic just after Easter and usually runs until October. She and her partner, Mike Palmer, begin harvesting from the northern Gulf in June, after the water clears. “It’s really pretty down there.” Kocjancic explains, “The water in the northern Gulf looks like you are looking through sunglasses because of the tannic quality of the water, caused by the rivers dumping into the Gulf up here.”

The runoff from the rivers and other potential pollutants are a concern. According to Garlick, “Sponges are a touchstone for the health of the Gulf. Because they are stationary, the sponges are directly affected when pollutants enter the Gulf.” They can be a signal that something is wrong in the environment of the Gulf waters.

Unlike the sponge harvesters of the past, Garlick explains, “today’s sponge diver knows he or she has to be a good steward of the Gulf. Cut sponges are a renewable resource.” If treated well they should continue to grow just off the Forgotten Coast and remain a contributor to the economy of Apalachicola.