A Daughter of Jewish and Christian Heritage Discovers Her Own Spirituality

Never do I feel closer to God than when I am outside staring up at the night sky — a cool wind tickling my eyelashes, crickets playing a symphony to my ears, a warm mug of mint tea in my hands. 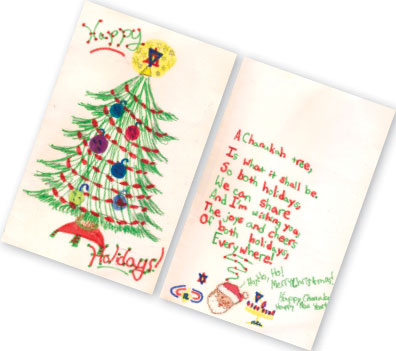 Perhaps this ethereal connection to the stars explains my affinity for twinkling lights and flickering flames, the closest counterparts we have here on the ground. In that light, it suits me well to celebrate both Chanukah and Christmas, this year and always.

My mother’s family is Christian, and my father was raised Jewish. I suppose that makes me bi-religious, or half-and-half, like coffee creamer.

When asked about my religion, I have always felt compelled to clarify — I know a little of both testaments, Old and New, like a child who grows up speaking English in America struggles to retain some of his mother’s native Portuguese.

I bought my first Christmas tree when I was 23. Four feet tall and crafted by Martha Stewart herself, the tree went up before Halloween and was still glowing clear through Valentine’s Day. I guess I was making up for lost time. (Don’t worry, Nana. I lit my menorah, too.)

I went to temple for Hebrew school on Sunday mornings and attended midnight Masses with friends from school. I danced the Electric Slide at Bar Mitzvahs. I stood up, sat down and stood up again at my young cousin’s first communion. And the services were, in many ways, the same. There were candles to light, songs to sing, blessings to know by heart.

As I grew up, the need to “pick a side” became more resonant.

In high school, I witnessed a Baptist classmate tell her Jewish best friend repeatedly, and with little emotion, that she was going to hell. In college, a Catholic pal began dating an orthodox Jew, and I listened sympathetically as she bemoaned his disapproving mother. All around me, I saw unresolved conflict and hurt feelings over beliefs that were meant to bring us together.

I remember being 5 years old, working on a greeting card that blended Christmas and Chanukah by way of a Star of David tree topper. I’ve never lost that childlike sense of bewilderment, the kindergartner incredulous that everyone can’t celebrate and live peacefully.

I don’t consider myself bound to either — or any — religion, but rather to my own spirituality. I’m not simply a Christian or solely a Jew, and there’s nothing complicated about it. I’m just Ashley. I love laughter and guacamole. I sing at the top of my lungs in the car. I am a good, honest person.

In truth, I practice religion about as much as I practice piano. Which is to say, not much at all.

What I do live by is the aim to listen, to learn and to love. To help people when they need me. To be grateful for everything I have. For sky and sea. For a family that loves me endlessly. For bright pink toenail polish. For shooting stars.

My favorite aspect of Christianity is the Golden Rule, the so-called ethic of reciprocity — “So in everything, do to others what you would have them do to you.” From Judaism, I treasure the mitzvah — the Yiddish word for a selfless good deed. I want to be that light … that purest symbol of faith and goodness.

I’m sure it’s no accident that the word spirituality contains within it another word — ritual. There are rituals in every religion, even in mixed faiths like mine.

On Ash Wednesday, Catholics smudge soot on their foreheads as a sign of repentance. Jews eat apples with honey at Rosh Hashanah to symbolize the sweetness of the New Year. Muslims fast during Ramadan to cleanse themselves through restraint and humility. Buddhists meditate to become one with themselves and with God.

A Christmas tree and a menorah both shine with tiny white lights. One honors a man, a light who sought to bring peace to the world. The other celebrates the light itself — a light that glowed strong against all odds, in a time of darkness. When I light a candle or plug in a sparkling strand, I am reminded of all the good in this world.

As the holiday season fades, we must remember that every day is a holy day. A new light. Another chance to rejoice in all the things we love.