Timeless craft melds past and present

For thousands of years, people have made candles for practical reasons. They were the only source of light, illuminating homes and places of worship.

“They didn’t have electricity, and candles were lighting for the everyday person,” said Janine Heiney, who teaches candle-making classes and leads demonstrations at Tallahassee’s Mission San Luis. “They were a huge part of mission life.”

Candle making is just one of the centuries-old skills portrayed at the living history museum. The setting dates back to the late 1600s, replicating the principal village of the Apalachee people. It was also vital to the Spaniards. Mission San Luis calls it its westernmost military, religious and administrative capital.

According to the History of Lighting website, the earliest candles were made from whale fat in China during the Qin Dynasty, some 200 years B.C. In India, at about the same time, they were made from wax that was a residue of boiling cinnamon.

The glow of candles was, and is, an essential part of Hanukkah, the Jewish Festival of Lights, dating back to 165 B.C., according to the National Candle Association. “There are several Biblical references to candles, and the emperor Constantine is reported to have called for the use of candles during an Easter service in the fourth century.”

A love of candles melds past and present. They’re still a part of religious and personal celebrations. Candlelight pairs with white tablecloths at fine dining restaurants. We display them in our homes, sharing their soothing scents. They provide comfort and light during power outages or storms. 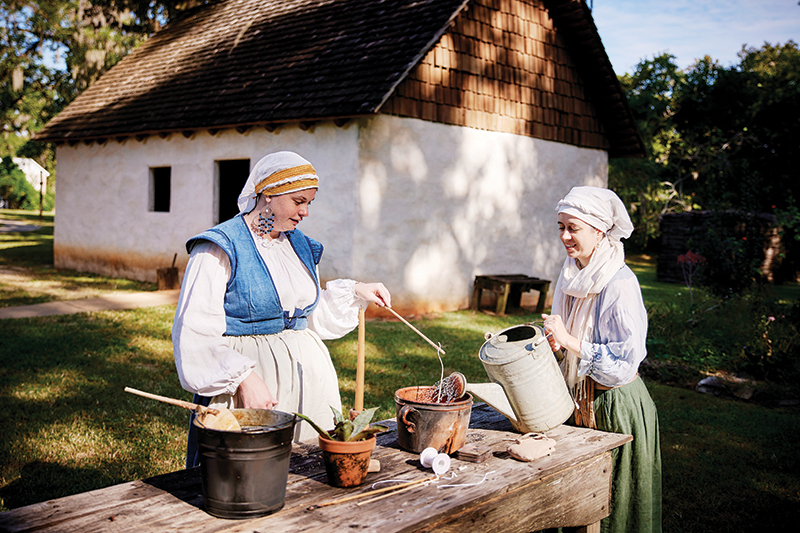 Janine Heiney, left, and Arielle O’Hara prepare to engage in a candle-making operation. On the table, they have assembled sticks, braided cotton for wicks, water, a scoop made from a shell, and juniper berries, rosemary and cinnamon. Photo by Dave Barfield

Davis primarily makes soy candles in decorative cups and containers, but she’s experimenting with hand-dipped candles, conceding the art has its challenges.

“It takes time to work everything out,” she said.

The basic premise for making candles still depends on wicks and wax, though improvements have eased the process.

Walk into a craft store or search online and discover a variety of wicks, scents and molds. Wax options include soy wax or soy wax flakes, beeswax, paraffin, gel wax, bead wax and wax chunks. Some home crafters use their old, half-used candles or even crayons.

The ancient Romans were likely among the first to use tallow or animal fat (not the best smelling) to create their candles, and the practice continued for centuries. Beeswax was an improvement but not always available.

The botanist William Bartram, born in 1739, wrote that honeybees weren’t in this region until the 1770s, Heiney said. “Beeswax was probably not that prevalent and likely imported.”

Dipping back into history, Heiney demonstrated the art of making candles combining beef tallow and beeswax, which don’t smoke as much or have a distinct odor.

While there are more materials available now, the process is “almost unchanged” after all these years, she added.

Heiney set out a pot of wax to be melted over an outdoor fire. On a table were sticks, braided cotton for wicks, a pot of water, a spoon Heiney made with a piece of wood and a shell, and bowls of juniper berries, which add a nice cedar smell, and rosemary and cinnamon to be added to the wax. Cinnamon was expensive in the early 1700s, but it became a popular ingredient in candles.

Dipping candles, then and now, is all about building layers. You dip the wick into the wax, pull it out quickly before it burns, and dip it into the water. Repeat until the wax builds up, wiping off the water.

“At first, it doesn’t look like it’s doing anything,” Heiney said. “But it eventually builds up.”

Tips for Making Your Own Candles 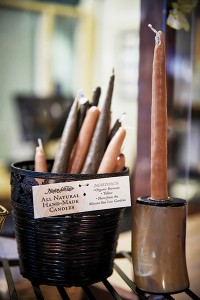 Hand-dipped candles add grace to any home and make a welcomed holiday present. They’re also a fun craft activity with kids. Here are tips from Heiney and other pros if you want to make your own hand-dipped candles. It can be a time-intensive venture, but candlemakers will tell you it’s worth it.

Wax: Wax is a personal preference, said Heiney. For dipped candles, she suggests beeswax or paraffin. There are also taper blend blocks of wax or wax beads.

Wicks: Look for wicks in a natural fiber such as braided cotton. You can find wick spools at a craft store. Beekeeper Charlotte Anderson advises that beeswax burns hotter than some other candle types. This means that a larger wick is usually needed. She suggests a size 2/0 cotton wick.

Herbs: You can use your own herbs or buy candle scents and dyes.

Double up: Make an extra-long wick, and you can make two candles at once though you’ll have to keep them from touching. Fold over a stick, a ruler or a wooden laundry rack to dry. Once cool, snip the wick in the center.

Melting: Modern candlemakers often use a double boiler to melt the wax, plus you’ll need another pot
(one that you won’t use again) or can for dipping into water. Don’t pour wax or waxy water down your drain.

Learn more: You can find detailed guides to candle making online and in books like Candlemaking for the First Time by Vanessa-Ann, or online classes are available at Mission San Luis at MissionSanLuis.org under the tab “Workshops.”