The Latest in Laser Removal

The symbol you found poignant as a college student may no longer have meaning.

And today even the tattoo you impulsively submitted to as a way to memorialize any ultimately impermanent aspect of your life can become obsolete.

The Tallahassee Plastic Surgery Clinic is equipped with Enlighten, a tattoo-removing laser that Dr. Alfredo Paredes Jr. says is both more effective and safer than any laser he had used previously.

Enlighten operates with picosecond technology — one trillionth of a second.

“That is so fast,” Dr. Paredes said, “that when you are targeting a tattoo, it creates a photo-acoustic effect that shatters the pigment particles underneath the skin small enough that your body’s immune system can come in and remove them.”

Dr. Paredes likened the treatment to a lithotripsy procedure whereby high-energy shock waves break up kidney stones, reducing them to pieces that can easily be passed.

Enlighten has applications in addition to tattoo removal. It may be used to remove brown spots, often called sunspots; to tighten skin and reduce pore size and to eliminate fine lines.

“A lot of people don’t like brown spots on their face or hands, and they occur frequently in Florida where we get a lot of exposure to the sun,” Dr. Paredes said.

“Enlighten is the most effective laser I have used on brown spots. It targets the brown pigment in the skin in the same way you can target a tattoo.”

Dr. Paredes stressed that Enlighten is not used on melanomas, but instead on abnormal accumulations of brown pigment known technically as benign pigmented lesions.

Enlighten, Dr. Paredes said, is safe for use on all skin types.

“It is so fast that it does not heat up the skin,” he explained. 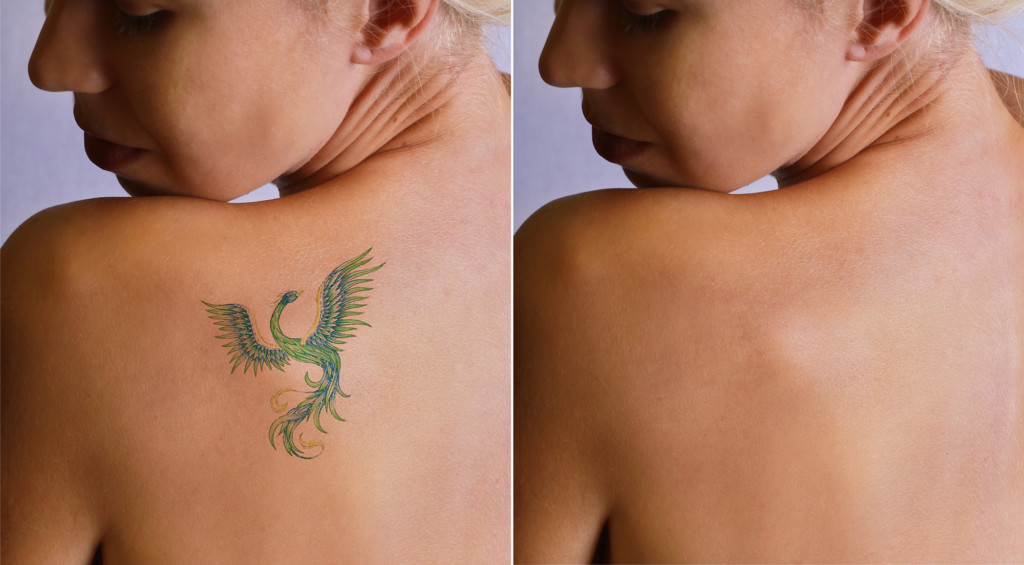 “A nanosecond isn’t very long, but with slower lasers, the skin surrounding your target area absorbs the light and it can result in a burn. With picosecond technology, we can apply the light so quickly that it basically gets past the skin before it knows what’s happening.”

Some brown spots can be removed in one session.

Laser tattoo removal requires an average of six to eight sessions, and Dr. Paredes recommends that they be separated by eight weeks to give the immune system time to do its work.

The cost for removals, beginning with the smallest tattoos, starts at $150 per session.

While the surgical removal of tattoos is in some cases a viable alternative, surgery will leave a scar whereas Enlighten treatments do not.

In many cases, a patient’s employer may not allow visible tattoos or the patient may have plans to enlist in the military.

“I have had doctoral students who were going to be sitting with their committee for an oral comprehensive exam and they felt like they wouldn’t pass if they had a tattoo on their face,” Dr. Paredes said. Sometimes, he fixes typos.

“The tattoo artist may have gotten a number wrong in a date, for example, and we can remove that one number so it can be replaced,” Dr. Paredes said.

For patients who require it, Dr. Paredes may use a topical numbing cream or a lidocaine injection (like a dentist uses) to combat pain.

He often uses a “test patch” to determine a patient’s pain tolerance and goes from there.

No tattoo is so large that it cannot be removed.

“I’ve seen remarkable results — a sleeve or an entire chest,” Dr. Paredes said. “It takes more effort and it may take two years, but we can get rid of them.”

The Appeal of Allure Laser MediSpa

It’s All On The Wrist