Periodontal Disease Can Cause Health Problems Far Beyond Your Teeth

Here’s something to chew on: Federal researchers report that nearly half of adults over the age of 30 suffer some form of periodontal disease, often without even realizing it.

That’s problematic because periodontal disease has been linked to serious chronic conditions such as heart disease and diabetes. Oral health problems also have contributed to a significant increase in costly emergency room visits in Florida and across the country. And, in the worst cases, oral infections have even proved to be lethal.

This, at a time when fewer and fewer people are able to afford dental care, leading them to forgo regular checkups and necessary treatment for chronic infections.

“So many people have it and don’t know it,” said Dr. Walter Colon of Periodontal Associates of North Florida. “Periodontal disease is often a silent disease with no symptoms. By the time it starts hurting you, it’s too late, and you’re going to start losing teeth.”

So how does your oral health affect your entire body?

It begins with the gums. Periodontal disease is an infection of the gum and bones around the teeth that occurs when bacteria build up on the teeth and migrate to the gum, settling into pockets between gum and tooth. The bacteria then begin to spread.

These low-grade oral infections are surprisingly common. According to a 2010 report from the Centers for Disease Control, 47.2 percent of adults ages 30 and over have some form of periodontal disease. That number jumps to 70 percent for those over 65.

It’s more common in men than women, in those living below the poverty line and in those who smoke.

Unfortunately, many people with oral infections simply overlook them. Colon says the signs are often subtle, the kind of thing only a dentist might pick up on during regular checkups. Sometimes it isn’t even noticeable until a periodontist takes measurements of the pockets around the base of the teeth.

Even when periodontal disease does begin to show, people don’t realize that red gums, swelling and tenderness are signs of a problem. And bleeding? That’s infection, not just a warning that you might be brushing too hard, according to Colon.

That’s why it’s important to visit your dentist a minimum of twice a year — and as many as three to four times a year if you’re prone to heavy tartar build-up — for cleanings and check-ups, said Tallahassee dentist Dr. Russell Rainey.

He said the body recognizes even the early stages of gum disease as infection and begins fighting. Catching periodontal infections before they become too serious helps relieve the strain on your body’s immune system.

It can also help you avoid the knife. 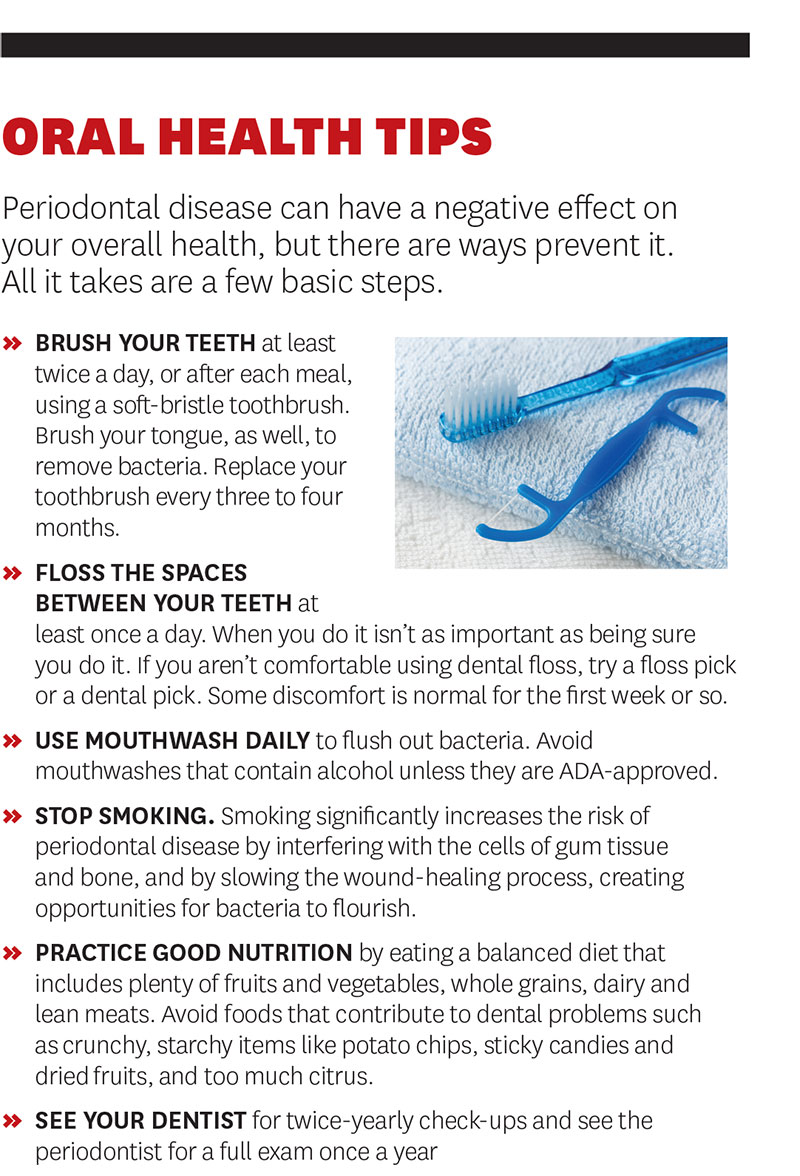 When the body detects an infection, inflammation sets in to immediately begin protecting and repairing tissue. Blood flow increases to the affected area, where white blood cells attempt to isolate and remove foreign bodies. The result is swelling, redness and pain.

That immune system response is healthy — at first. But chronic inflammation results when the infection is not properly treated, and, in effect, the body remains at constant war with itself as it tries to oust the infection.

Chronic inflammation has been linked to everything from cancer to atherosclerosis, or hardening of the arteries.

While there’s no solid proof that periodontal diseases can cause chronic health problems such as heart disease or diabetes, study after study has shown there are significant connections between oral health and those more serious health problems.

For example, a study reported by the National Institutes of Health found that “the higher the levels of … periodontal-disease-causing bacteria, the more likely people were to have thicker carotid arteries.” Another report by the American Heart Association concluded that there is “a direct relationship between periodontal microbiology and subclinical atherosclerosis.”

One intriguing study published in 2014 the American Journal of Preventive Medicine analyzed more than 330,000 medical insurance claims of people who had both periodontal disease and one of five other conditions: type 2 diabetes, coronary artery disease, cerebral vascular disease, rheumatoid arthritis or pregnancy.

Dr. Sam Ashoo is the medical director for emergency services at Tallahassee Memorial Hospital. He notes that patients with serious oral infections often require much more aggressive treatment if they also have a chronic condition such as diabetes.

“Chances are much higher that you will require hospitalization,” he said.

Colon puts it like this: When you have periodontal disease and an uncontrolled chronic condition like heart disease or diabetes, they play off of each other to make the overall effect worse — a case where 2 plus 2 equals 6.

“They are communicating through a common topic, and that is inflammation,” he said. “It’s fuel for a fire.”

And periodontal disease isn’t just linked to the biggies, either.

People who experience frequent sinusitis might not actually have sinus problems so much as they do oral problems. Up to 40 percent of chronic maxillary sinus infections are actually caused by dental infections, according to researchers from the University of Pittsburgh Medical Center.

From Toothache to the ER

Not only has periodontal disease been linked to other systemic health problems, but left untreated, it’s likely to lead straight to the emergency room. Especially for those who do not have insurance or a means to pay for dental care.

Ashoo said he has seen a rise in dental-related ER visits over the past 10 years. There is a direct correlation between the decrease in dental services available to people without a means to pay and the increase in ER visits, he said.

He said the most common complaint of those visiting the ER for a dental problem is pain from an abscess. Abscesses are caused by periodontal disease, or by chipped, broken or decayed teeth that have not been repaired, often because of an inability to pay.

“That results in pretty significant problems that are dealt with in the emergency department,” Ashoo said.

A CDC survey of hospital emergency rooms nationwide found that the number of dental-related ER visits nearly doubled between 2000 and 2010. That amounted to 2.1 million dental emergencies in 2010, costing the health-care system more than $860 million.

In Florida, there were about 115,000 dental-related ER cases in 2010 for a cost of about $88 million. Taxpayers picked up the bill for about one-third of those visits, according to the report “A Costly Dental Destination,” by the Pew Center for the States.

A Rare But Real Risk

On rare occasions, even a last-minute trip to the ER can’t save someone with an untreated oral infection.

At least 66 patients hospitalized because of periapical abscesses died between 2000 and 2008, according to the Journal of Endodontics.

There have been some high-profile examples.

Last year, a 31-year-old man from Cincinnati ended up in the hospital when what he’d thought was a simple case of sinusitis turned out to be a dental infection that seriously damaged his heart. Doctors performed open-heart surgery but were unable to save him.

And, in 2007, a 12-year-old Maryland boy’s decayed tooth led to an infection that spread to his brain. He spent six weeks in the hospital and had two operations before he died from what had started as a toothache.

Severe infections like those that can occur with dental abscesses sometimes cause septicemia, in which bacteria enters the bloodstream and spreads to other parts of the body, including the heart and brain. This can result in endocarditis in the heart or an infection in the brain, both potentially fatal conditions.

Children and those with compromised immune systems are particularly susceptible, Colon, the periodontist, said.

“Today, with antibiotics and regular care, nobody should go through that,” he said.