Rabid, or Not Rabid?

When Your Life Depends on the Answer, Get the Shots 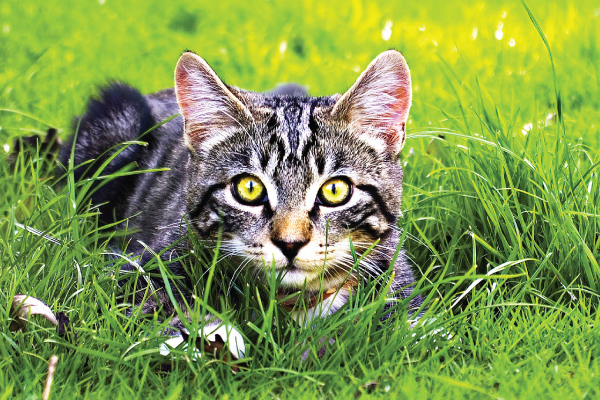 I’ve been a lawyer for 37 years, so I’ve gotten used to being called “rabid” by happy clients and unhappy opponents.

Today — the midpoint in my series of rabies injections — I have a more literal understanding of the word.

But one dark gray tabby looks pretty much like every other dark gray tabby, and anyway, taking mental snapshots for a feline photo line-up was the last thing on my mind as I scrambled to corral the cat.
The fleeing feline found its way home, but not before the cat-who-may-have-been-Cassie sank her teeth deep into the thin layer of flesh on my left thumb.

Mary Ellen ministered to me with Neosporin, bandages and wine, but by Sunday morning my thumb was throbbing, immobile and scary swollen. The neighborhood walk-in clinic gave me a tetanus booster and started me on antibiotic pills the size of flying Florida palmetto bugs.

The clinic folks also dropped a dime on me to the local health department, as Florida law requires in animal bite cases.

I was filling the antibiotic prescription when the health department’s social worker called my cell to perform her dual duty of protecting public safety and protecting me. It was plain she was following a prepared script designed to determine if there was any possible way I could ID my feline “un-sub.”

Eyewitness identification is notoriously unreliable under the best of circumstances, and there was no way I could pin the rap on any particular Tallahassee tabby.

The social worker then turned her attention to me. “I’d like to explain your options,” she said. “We recommend rabies vaccination through the public health department or your doctor … ”

I stopped listening. To this aging baby boomer, there are worse things than death, and rabies shots are high on that list.

Somewhere back in the 20th century, I learned rabies prevention involved intensely painful injections to the stomach. Today’s rabies vaccinations are delivered in the arm and are not at all painful.

Nevertheless, my reptilian, terrified-child brain kicked in, and I began to make the case against vaccination.

“I’m pretty sure it was Cassie,” I told the social worker.” The swelling is down and I can move my thumb better than an hour ago.”

Over decades of dealing with government lawyers, I learned that “it’s your choice” is often a coded message that there’s a “CYA” operation in high gear. I took comfort that the health department’s script was laden with compound-complex and highly qualified sentences that I processed as, “You have as much chance of getting rabies as you have of winning the Nobel Peace Prize.”

I could tell the social worker was disappointed by my failure to jump in the car and get injected. I heard fear in her voice, like she might be in trouble with her supervisor if she failed to talk me out of playing rabies roulette.

I softened a bit and said, “Do you have some written information I could consider?”

She took my email address and within seconds, a link appeared.

She might just as well have linked me to a medical text written in Greek. Decades of professional experience has taught me that when a government employee can’t tell you in plain language why you should do something, it’s probably because you don’t really have to do it.

My family doctor set me straight. “Rabies is 100 percent fatal,” he said. “It can take a year to incubate, and the shots are not effective unless you start them within a few days, or, better still, a few hours. If you aren’t 110 percent certain who the cat is or 110 percent certain that you’re willing to die in a rabid stupor, take the shots,” he said.

Now, that was three sentences I could understand.

I’m not the stupidest person who ever played “you bet your life” with the state’s public health machinery. If they can’t communicate coherently with one person about one clear-cut choice, what happens when a community-wide public health crisis rolls in?