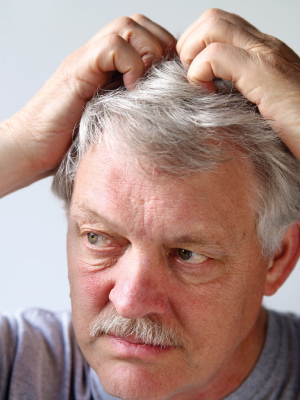 While shingles often appears as painful blisters on the torso, they can also erupt on your scalp, face or any body part.

Deanna Mims, a healthy 46-year-old entrepreneur, is used to running full steam ahead.

Since starting her own business, MarketDone, a marketing company for small businesses and nonprofit organizations, she’s been doing what business owners do — figuratively putting her blood, sweat and tears into her business for the last four years without a break. “I was pushing myself too hard,” she says. “I ignored the stress and just poured my soul into the business.”

Slowly, she noticed she wasn’t feeling well. At first, the symptoms were subtle. “My head itched so bad,” she says. “Then I had severe headaches. I thought I had been bitten, had Lyme disease or lice. Then my ears had swollen up and it hurt so badly I couldn’t hear.”

Mims was shocked to discover what was really going on inside her body. It was shingles, a painful, blistering skin rash caused by the varicella zoster virus, the same virus that causes chickenpox. Anyone who has had the chickenpox still has the inactive virus that can reactivate as shingles, as it does in about one-third of people.

Though not life threatening, the shingles rash can be very painful. And while it most often appears as a single stripe of blisters that wraps around either the left or right side of your torso, it can appear elsewhere. “The rash can occur anywhere on the body and is frequently on the face,” says Tallahassee-based family physician Dr. Karl Hempel. “If it involves the eye, it can cause visual problems and needs to be treated by an ophthalmologist.”

Age is another factor. The infection mostly occurs in older people, which is why Mims, who is in her 40s, dismissed the virus as something else.

After being chastised by her doctor for not coming in earlier, Mims learned that if her condition were diagnosed sooner, it would have been much less severe. Early treatment can help lessen the severity, reduce the chance of complications and shorten the duration of the infection. “It can reduce the length of the illness depending on how early it is started,” Hempel explains. “For instance, if it is started within 24 hours of onset, then the shingles may only last a couple of days. However, if it is started 10 days after shingles has started, it will have much less effect.”

The treatment for Mims meant rest and prescription medicines to reduce the pain and duration of the infection. “I stopped for two weeks and just slept and couldn’t read, watch TV, anything,” she recalls. “It was so debilitating I couldn’t think straight, I couldn’t focus. My clients had to wait, everything had to wait.”

A vaccine can help reduce the risk of shingles, Hempel adds. “More importantly, it reduces the chance of developing chronic pain which can occur after shingles,” he says. The shingles vaccine (Zostavax) has been recommended at age 60 or older. But recently, the Center for Disease Control’s immunization committee recommended individuals 50 and older get the vaccine. With a doctor’s prescription, Florida pharmacies can now offer immunization services, including the shingles vaccine, and will bill your insurance company directly.

Because the vaccine is deemed extraordinarily safe, anyone who does not have a compromised immune system and is 50 or older can get it. But even if you are younger, like Mims, don’t wait for the symptoms to get worse before seeing your doctor, she warns. “If you have an inkling, get to a doctor right away,” she says. “If you put it off like me, you will make it worse.”