Gardeners add to supply of plant critical to butterflies

Fall is the time to start removing milkweed from the residential wildflower garden. Milkweed has become a popular addition to the home landscape, and while short-lived, the plant’s blooms are striking in color and texture.  Better still, milkweed supports the monarch butterfly caterpillars. During the larval stage of life, the distinctive and threatened butterfly is totally dependent on this pasture weed with a not-so-good reputation in livestock circles.

Monarchs lay their eggs on the undersides of leaves and sometimes on the flowers of milkweeds species. There are several native and exotic milkweeds growing wild in the area, and many gardeners now cultivate this plant, which is toxic to mammals.

If milkweed is standing for too long, some monarchs may linger and likely be killed by the first cold snap. While the blooms are attractive to a variety of pollinators, removal promotes the butterflies’ instinctive migration behavior, which has assured the perpetuation of this colorful flyer across the millennia.

To prepare for next year’s crop of milkweed, collect seed now. Store it during the winter in a cool, dark and dry location. Desiccation packets used in some packaged products can be enclosed with the seed to discourage mold growth. 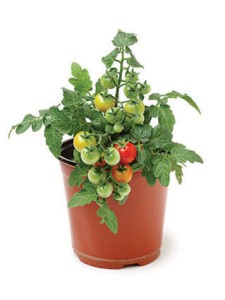 The hot days of late summer and early autumn are an odd time to think about gardening, but there is a task which will yield a tasty meal staple in the weeks to come.

The beginning of September is the time to start fall tomatoes for harvest in October and, if lucky, early November. There are several ways to successfully accomplish this.

Plants purchased at garden centers are the simplest way to start autumn vegetable production. Select healthy plants with no signs of disease or parasites.

Place them in a full sun location with an organically rich growing media. Be sure to water on a regular basis in the early morning as the heat of early autumn can quickly dehydrate a plant.

Monitor daily for insect and disease damage. Fungal disease can be very active in late season tomatoes, and if left uncontrolled, the pathogen can destroy the entire crop.

Aphids, stinkbugs, grasshoppers and others have built up their population over the summer. There are lots of hungry bugs that will chomp on tomato plants. Treat and control as needed.

Tomato seeds can be started this time of year. Use a rich soil in starter cups. Keep the cups in a shaded area until the seeds have sprouted and then move to larger containers or the growing site.

If skilled and lucky enough to have tomato plants that lived through the summer, the lower branches can be rooted. These “suckers” can be started much like seed, but use a rooting hormone on the sucker to improve the survivability rate.

Use a tomato fertilizer on the growing plants as the label directions recommend. 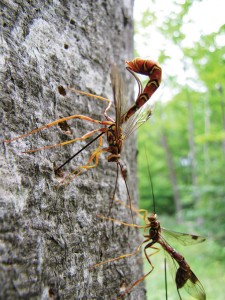 Most people who enjoy the outdoors view wasps as a chronically cranky flying insect that seeks any possible provocation for stinging anyone who comes within range. Florida is home to many wasp species. Most go unnoticed by people, possibly because there are no recorded incidents of this species stinging people. A wasp species which uses forest resources to incubate its next generation is commonly known as the stump-stabber. Megarhyssa macrurus, also known as the giant ichneumon wasp by entomologists, is a large species of about two inches in body length. A notable feature of the females is the ovipositor, which can reach four inches in length and has the intimidating appearance of an extended stinger. This wasp’s ovipositor is a combination of three filaments. The middle filament is the actual ovipositor, which is capable of drilling into wood and has a cutting edge on the tip. The stump-stabber’s eggs hatch and parasitize other insect larvae in the decaying wood. In a few weeks, they will have consumed their host and be ready to emerge.