Now that it’s summer, I can say from experience that sometimes it hurts, really hurts, to ring in a new year.

As 2018 faded away, I was taking down decorations from the Christmas tree, and as I stepped down from the ladder, I heard and felt something that I hadn’t heard or felt before.

I knew something was wrong — painfully wrong — with one of my knees.

And I knew this day would come.

I’ll explain. I grew up doing gymnastics. For about eight years until age 13, I jumped and twisted and twirled in the air and landed squarely on my feet — though often squarely on my rear.

I loved it. No, not landing squarely on my rear. I loved the competition, the camaraderie and the ability to spend my spare time flying around with friends.

For those eight years, I wasn’t committed enough to practice every day, yet I practiced or competed three or four times a week.

That amounted to tens of thousands of times in which I landed on my feet and subjected my knees to what probably amounted to two lifetimes worth of stress.

Before my Christmas-tree crackle, I’d had knee problems for years, enough to require seven surgeries — yet I’d always managed to remain mobile, functional and relatively free of pain.

But not this time.

For the next few days after that post-holiday “pop,” I couldn’t bend my right knee. I couldn’t straighten it, either. I couldn’t sleep with it and couldn’t work on it.

You should have seen it. No — you shouldn’t have. I’m not sure I can describe the swelling, but I’ll try: Picture an adult woman’s knee with a softball inside of it.

Now picture somebody hitting that softball with a bat. That’s how it felt.

Tylenol didn’t help. Neither did Advil — lots of it. I found the pain so sharp and unbearable that I no longer wanted a pain reliever. I wanted a chainsaw — and I wasn’t kidding.

I figured the pain and swelling might subside. I figured wrong, and come the New Year, I arrived at the doctor’s office in search of a remedy and relief, or a 3.5-horsepower Black and Decker.

My doctor took X-rays, looked at the images and asked me what in the world I had been doing. “Not landing on my butt,” I thought.

Seriously, gymnasts risk either long-term complications from landing correctly — squarely on their feet — or instant catastrophe from landing awkwardly.

You might have seen the horrific video in April of Auburn University gymnast Samantha Cerio, who dislocated both of her knees after she missed her landing and retired from the sport. I can’t imagine that level of pain and trauma.

Friends and family consider me pretty tough — you have to be when you live in Tallahassee and openly flaunt your love for the Miami Hurricanes.

And I think I maintain a fairly high threshold for pain. Still, this pain shot up and reached my mental and physical limits.

The doctor drained the fluid from my knee and then put my knee in a brace. He told me to take it easy. 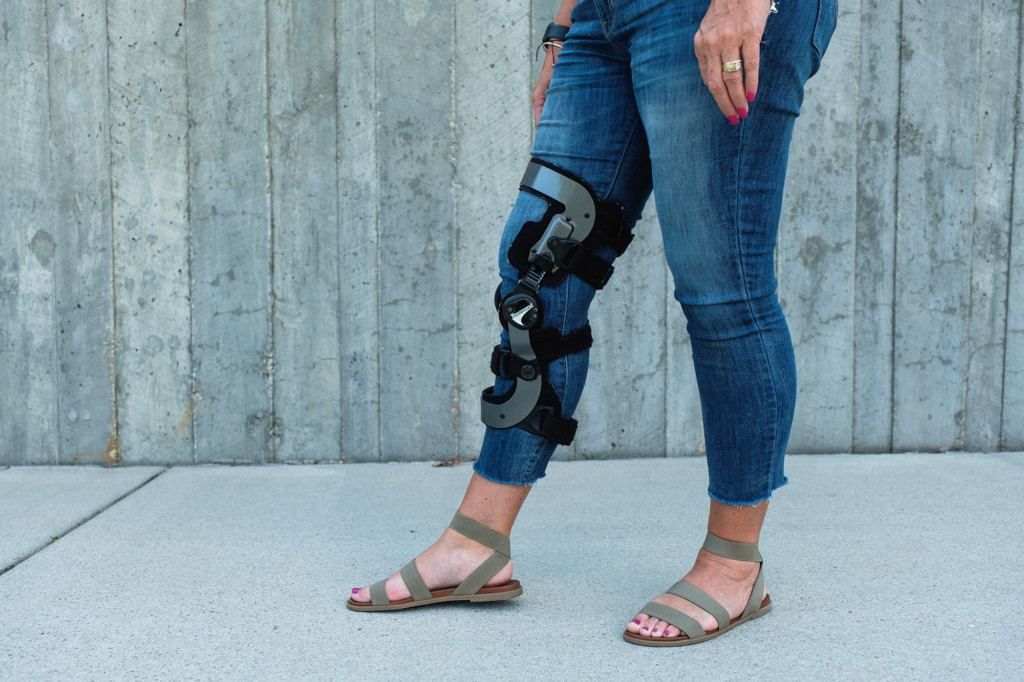 Lisa Johnson-Sostre says her doctor fitted her with a brace that stabilized her knee but made her feel like the Bionic Woman. Photo by Saige Roberts

Two days later, the pain returned — twice as bad as before. So I wanted that chainsaw all the more.

I returned to the doctor, who suggested that I get an MRI and scheduled a follow-up with an orthopedic surgeon.

The surgeon offered options — including partial or total knee replacement — or exploratory surgery to determine the source of the pain and fluid. The surgeon also fitted me with a knee brace — a bigger,
turbo-charged version of the original. This one ran up virtually the length of my right leg and made me feel like the Bionic Woman. It wasn’t a good look.

The new brace helped to better stabilize my knee, but the pain refused to go away. The pain grew with the size of my knee, which soon regained softball status.

Before you knew it, Bionic Woman with the softball-size knee was drawing stares, comments and winces.

“You’re making ME hurt,” said a man in the Walmart parking lot.

I considered asking him if he had a chainsaw he could spare.

Anyway, I went with exploratory surgery. The discovery: tears of the medial and lateral, or inner and outer, meniscus of the patellofemoral joint.

You might have heard of patellofemoral pain syndrome, also known as “runner’s knee.” It involves pain around the kneecap associated with repeated running and jumping in sports such as track, basketball and, you got it, gymnastics.

I knew the pain as a teen and as an adult — hence those seven surgeries to scrape fragments from my medial and lateral meniscus, which, as many say, acts as a shock absorber for the knee.

But the pain or those surgeries never prevented me from doing things I enjoyed, such as biking, swimming and running around with my grandkids.

Of course, that changed in late December.

After finishing the procedure, the surgeon discussed my “knee-joint effusion.” That’s the softball-making fluid that had accumulated around my knee.

The surgeon said the fluid in my knee had the consistency of motor oil, that vital fluid in a chainsaw.

He removed my medial meniscus, which he said was now beyond repair. He told me that without that cushion, I could encounter persistent pain — tell me about it — and arthritis.

He recommended replacing my right knee but cautioned that a knee replacement lasts only about 10 years, so if I got one now, it might not be my only one.

He also discovered chondrocalcinosis, a condition in which crystals from calcium build up in the cartilage of the joints, causing pain, stiffness and loss of function.

I’ve been getting around better lately. The surgeon’s work has kept that motor oil and softball out of my knee, which means I can go for walks and do more of the things that I enjoy, sometimes even without that brace.

So in terms of surgery, I’ll see how it goes.

I suppose I’ll truly find out where I stand in December when I climb that ladder again.