What Parents Need to Know About Children and Depression 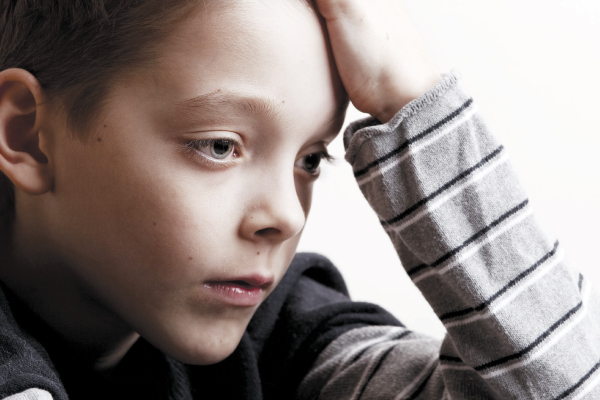 Whatever your worries, the key is to realize depression is easily treated and is far from abnormal — one in four Americans will experience depression at some point in life.

Dr. Jay Reeve, president and CEO of the Apalachee Center, recipient of the 2003-2004 Outstanding Teaching award for child and adolescent psychiatry at Brown University and licensed clinical psychologist for 18 years, advises that if a child’s behavior is severely uncharacteristic (diverging from their usual behavior or maturity level), or seems completely causeless, it could be a sign of chronic depression. This is the difference between a child who has depression and a child who is experiencing moodiness.

“There’s a fairly broad normal range for mood fluctuation,” Reeve stressed. A child who is sad or throwing a tantrum could easily just be reacting to an environmental stimulus. But if the attitude seems completely unwarranted or uncharacteristic, such as seemingly spontaneous anger or reclusion, it could be a sign of something larger, he said.

Children can display symptoms of chronic depression as young as four years old. Until they are older, however, it might be very difficult to parse these symptoms from those of anxiety. Reeve advises parents to watch for such symptoms as emotions that seem unrelated to their surroundings and situations, or a disengaged attitude. Regression (when a child begins to behave more immaturely than is characteristic or expected for them), severe school avoidance and aversion to people with whom they are normally close are other warning signs.

“What you really want to watch out for are things that are interfering in the normal activities of daily life,” Reeve explained. If your child no longer participates in daily habits such as eating, sleeping or socializing, there is a good chance something is wrong. Parents should start thinking about getting professional help if a child’s emotional disturbance lasts for a month or more, he advised.

He goes on to say that parents who believe their child might have depression should seek an assessment by a child therapist or psychiatrist, not just their pediatrician.

“Even though I think that there is a huge value to the medicines that are out there to treat depression, it is also hugely important, especially with kids and adolescents, that they get seen by psychiatrists,” he said. Psychiatrists are specially trained to assess a child’s symptoms and determine the best treatment plan. This could be as simple as changing something in the child’s home or routine, which can sometimes be an alternative to prescribing medications.

Reeve recalled a past patient, a 12-year-old boy who lived in a bad neighborhood and was not allowed to leave his house much, because of his relatives’ misgivings about his surroundings. The teenage boy had begun to show symptoms of depression — he was generally disengaged, and his grades were slipping. Reeve knew that he needed to find his patient an outlet. After some time, the boy began skateboarding at a park nearby his home, where he could be supervised. With his newfound hobby (and friends to match), the boy began to re-engage. He was more social, happier and proud of his achievements.

“In his case … it was just a matter of seeing what the environmental deadlock was and … giving him an opportunity to get out of it,” Reeve recalled.

The most important thing to keep in mind is that depression is common, diagnosable and treatable. When talking to your child about their depression, especially with older children and teenagers, it’s crucial to do so in a non-stigmatizing manner.

“Everybody goes through bad times, and everybody could use some help during the bad times they go through,” said Reeve. Parents who recognize the issues — and are positive and proactive about working though depression — can make all the difference.

The behavior of depressed children and teenagers can be different from that of adults, according to the American Academy of Child & Adolescent Psychiatry. Here are some signs your child might be depressed, from the group’s website, aacap.org.

» Frequent absences from school or poor performance in school

»Thoughts or expressions of suicide or self destructive behavior