In preparing students to become yoga trainers, Ashley Thesier begins by telling them that she can’t teach them anything.

Rather, she said, “I point people back to their inner knowing.”

Getting there is a process, and Thesier helps steer them home.

“Yoga, as even a beginning teacher will tell you, means to unite,” she said. “We begin on a physical level by uniting body and breath. Then, we move to more subtle levels.”

Harder to control than the breath is the mind.

“We strive not to quiet the mind, but to still the mind and become a witness to it,” Thesier explained. “We move past the body, breath and our unsettled, self-critical monkey minds to a higher intellect and ultimately achieve a connection with sumati, the divine.”

That connection, Thesier said, is synonymous with balance and alignment that allow for healthfulness. She has learned in over 20 years of practicing yoga that when she gets away from the discipline, life becomes more difficult. So it is that yoga has become her constant and dear companion.

Thesier is the owner of Yoga Power Tallahassee on Thomasville Road where she trains trainers and leads classes for all. She opened the studio in January after selling the yoga business she had operated in Tampa for eight years.

As a young woman, she was convinced that yoga was not for her. After high school, she studied at the Edgar Cayce School of Massotherapy in Virginia Beach, Virginia, to become a massage therapist. One day, she went to get a massage, herself, at a building that also housed a yoga studio called Inside Out.

“Yoga is too gentle for me,” Thesier told her masseuse. “The girls upstairs will kick your butt,” came the reply.

Thesier tried it on, and a career change was in the making. She would complete teacher training there.

All types of yoga have their place and have value, Thesier said, “but there is a difference in just facilitating a class in ‘Simon Says’ fashion and actually teaching the inner workings of yoga. Teacher training is a lot of information. I liken it to putting your finger in a light socket; you have to able to contain the charge.” 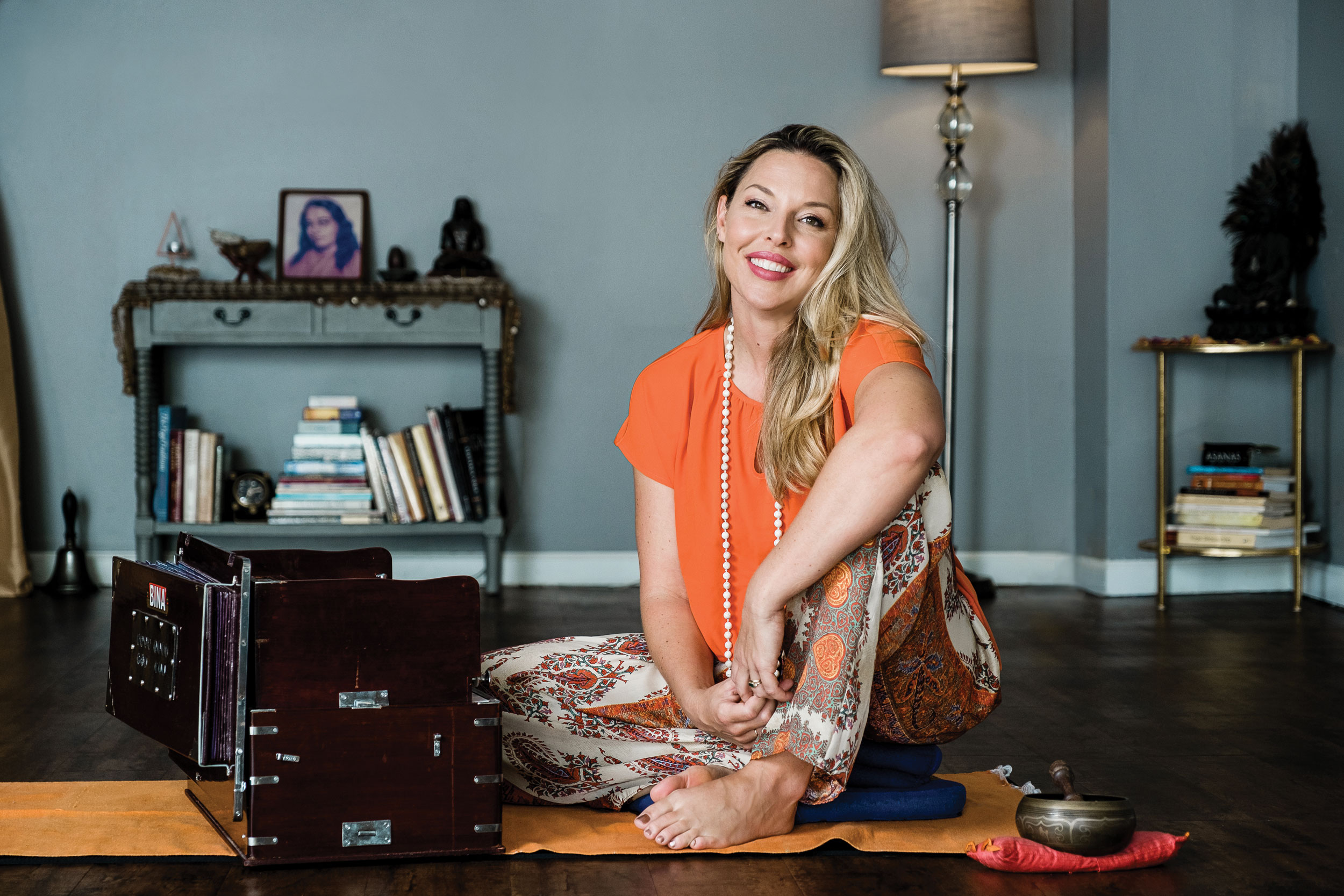 For Ashley Thesier, life becomes more difficult when she gets away from the practice of yoga. Alignment, she says, leads to healthfulness. Photo by Saige Roberts

A conversation with Thesier, like her classes, doesn’t stay on a surface level for long. She readily speaks to the healing power of yoga.

“If we look at the energetics behind the causes of disease or what Edgar Cayce called dis-ease, we discover that if we are working optimally, if we are in alignment with our true nature, then we are healthy. It is when we get out of alignment that disease and degeneration accelerate. By working the asanas (yoga postures), we open the energetic centers and get everything to flow freely. The pipes are wide open, and we can stay in tune with who we are.”

Yoga enables people to better recognize when they are out of alignment, said Thesier, who cautioned, “If we stay out of alignment long enough, that becomes the norm.” (That statement invited a conversation about society as a whole, but we left that for another day.)

Practiced intentionally, Thesier said, yoga is more than an hour in church. It can influence or become a person’s way of being in the world.

Kellie Gezels, who, along with her daughter, completed yoga teacher training with Thesier, agrees.

“It teaches you a new way of being in the world and how to get out of your own way,” she said, adding that yoga has brought about, for her, improved relationships with others.

Gezels physically does yoga twice a week but meditates and works on the mind-body-spirit connection every day. She recommends yoga for anyone.

“It’s never too late to start,” she said.

In shopping for yoga studios, however, most people gravitate to the option that is most consistent with their accustomed lifestyle.

“Busy people like busy yoga,” Thesier said. “Picture someone with her double espresso and her yoga mat under her arm heading into a hot yoga studio on her ‘rest day.’ In Virginia Beach, there was a hot yoga studio that all the Navy Seals would go to.

“A yin class is meditative and slow; people might not even get off their bottoms. The people who need to be in the hot yoga class tend to be in the yin class. And if you are already running hot, then doing hot yoga isn’t going to be conducive to health.”

In order to achieve optimal alignment and achieve a balance of masculine and feminine energies, people need to depart their comfort zone, Thesier said.

Today, yoga is seen in the United States to appeal primarily to women. Yoga pants were not developed for dudes. But 100 years ago, it was unfashionable for women to practice yoga, Thesier noted. The British occupation of India broadened awareness of yoga practices. Soldiers did the asanas.

“But yoga is like Whack-a-Mole,” Thesier said. “If you shut it down in one place, it’s going to pop up in another. When it popped up in the West, women gravitated to it. Religious teachings and spiritual teachings have always been safeguarded by women. In its purest state, yoga is a feminine practice. The asanas are masculine, but when we are in direct communion with the divine, that’s a receptive quality, which is feminine.”

“Anybody can teach yoga, and whether they ever teach a formal class is not necessarily important,” Thesier said. “If they know the information and they practice it, the nature of their being will be that of a teacher.”

But, if someone wants to make teaching yoga a career, he or she must have an authentic love for the practice and be willing to delve into the yamas and the niyamas. They are two of the eight limbs of yoga and relate to how a person behaves in the world and toward herself. Non-violence and truthfulness are encouraged. Hoarding is discouraged.

“But yoga will never tell you not to do something,” Thesier said. “If you’re going to do it, go all the way.”

And do yoga along the way.

What You Need to Know About Modern Mattresses

Rescued by a Rescue