The smell is gone — mostly

I can’t speak for the rest of the state, but in Leon County, it seems your chances of encountering a skunk are about the same as you bumping into, say, a skunk ape.

To investigate this musky mystery I started at the local level. I reached out to Teresa Stevenson, the director and wildlife rehabilitator at the St. Francis Wildlife Association in Havana. St. Francis takes in injured wild animals, nurses them back to health and sets them back on their way when possible. The only thing Teresa could tell me is that they’ve cared for just three baby skunks in the five years she’s worked there. Even the folks at Critter Control don’t get many skunk calls nowadays. Owner Brandon Lynch said in four-and-a-half years he’s only had two calls. Sightings are rare. Oh, they’re around, but they’ve never been much of a problem in this particular area, he said. 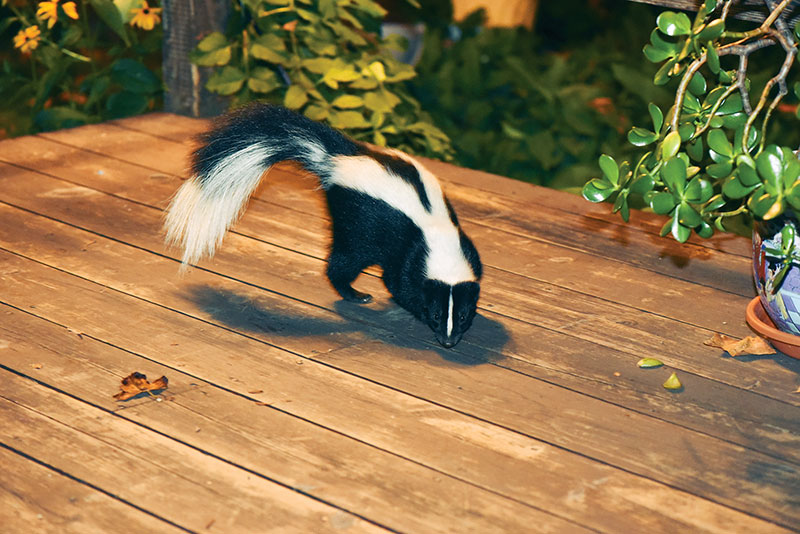 Next, I placed a couple of calls to the Florida Fish and Wildlife Conservation Commission, a.k.a. the FWC. After all, they’ve got the biologists who could settle the issue. My initial work seemed to point toward a legitimate enigma, and now I had some pointed questions: Where have all the skunks gone? Have they been out-competed by other critters like armadillos, or has predation taken its toll? Where are the sightings, and, uh, smellings? Can we estimate their numbers? Do they congregate seasonally at certain locales, like the Capitol (just kidding)? Is there a skunk hotline?

I reached a live person in FWC public relations who suggested I should email my questions to her and she would farm them out. So I did and followed up with another call to make sure she received the email. No response. A couple of days later, I called again. Went straight to voicemail, and the mailbox was full. At that point it began to dawn on me that a conspiracy was afoot. It’s the military-industrial-skunk complex, man! It’s hiding the truth!

Without additional live sources, and a deadline rapidly looming, I warily drudged my weary way back to Google. I found a website called “Habitat Tracker,” which appeared to be a joint effort by the Tallahassee Museum and Florida State University. For a moment my hopes ran high, thinking there would be running log of observations in the wild. But upon closer inspection, the “tracking” appears to involve skunks-in-residence at the museum. That was later confirmed by Suzie Buzzo, assistant animal curator at Tallahassee Museum. Suzie said the Habitat Tracker was being used to teach kids how to observe wildlife and take notes, but it’s not a functioning page anymore.

Still, the website offered up some interesting tidbits of general information. On paper, the skunk population is “stable,” but population densities vary, with as many as 50 skunks per square mile in a region where striped skunks are usually found. According to the International Union for Conservation of Nature and Natural Resources, they are a species of “least concern.”

Fortunately, at the last minute, the FWC came through for me. Terry Doonan, mammal conservation coordinator, ’splained it all, starting with Skunk 101: Florida is home to both the Eastern Spotted Skunk (Spilogale putorius) and the Striped Skunk (Mephitis mephitis). They can be found throughout Florida except the Keys (which tells me they have high standards). They frequent brushy fields, weedy pastures and disturbed areas in residential and suburban areas. They usually roam around at night and are omnivorous. They den in vacant armadillo or gopher tortoise burrows, brush piles and woodpiles.

Doonan confirmed that neither species of skunk is an endangered listed species; however, the eastern spotted skunk is on the list of Species of Greatest Conservation Need in Florida. The purpose of this list is to “identify the broad range of Florida’s species that are imperiled, or are at risk of becoming imperiled in the future.”

“I’m not sure sightings are more rare now than in previous years,” Doonan said via email. “Because skunks are nocturnal, I don’t think there is a direct correlation between sightings and population size. Estimating numbers with any assurance will require more formal research studies, which have not been done at this time. I don’t know that there has been a decline of either species in Florida.”

Doonan passed along one last scent-tilla of information: A somewhat informal request for skunk observations was sent out about 10 years ago, he said. But it didn’t wind up making much of a stink.

“That effort didn’t produce a formal report, and the results weren’t intended to provide a population estimate. We don’t have information on how often skunks are seen as roadkill in Florida,” he said.

Which leaves us where we started. Where are the skunks now? Apparently, they’re staying under the radar — for the moment. Who knows, they could be biding their time and stocking up on stink juice until they can take over the world. So, until they choose to come out of the shadows, all we can do is keep our eyes open — and our noses to the wind.

Q. Skunk sightings may seem rare, but they can sometimes become a nuisance. What should you do about them?

A. If you have problems with skunks, you may be able to resolve the problem by simply removing the source of food attracting them. The animal may be caught in a trap, but relocating nuisance wildlife is illegal.* If you catch a skunk in a trap, avoid being sprayed by slowly approaching the trapped skunk and covering the trap with a small tarp or towel. The trap must be moved very carefully without jarring the animal or frightening it by letting it see you. Skunks, like all mammals, can carry rabies, but this has not been a serious problem in Florida. FWC does not recommend handling wildlife with your bare hands.