When Temperatures Drop, Flounder Head for the Deep

About the time that mallards and widgeons and loons fill the flyways and white-capped bipeds in sedans take to the highways, another migration gets underway, this one unseen.

After months in which countless flounder are gigged, hooked, landed, cleaned, stuffed and savored, surviving “flatties” depart grass flats, bays and creeks for the deep Gulf waters where once they began life as tiny fry at the mercy of currents.

Flounder may follow mullet, an important food source, into the Gulf, or it may be that falling water temperatures trigger their retreat to the deep. Once they get there, spawning commences at depths of 70 to 180 feet. Researchers have found that migratory flounder tend to be females that grow large clobbering the abundant forage found inshore. The largest are called doormats. The less ambitious males live short, happy lives offshore rarely exceeding three years in age or 14 inches in length.

Capt. Lee Chapin of SGI Charters on St. George Island is a flounder fishing enthusiast. A professional guide for five years, he has been fishing since he was in diapers. Mostly, he catches flounder right off the beach or in shallow water around structures such as jetties or piers.

He favors Carolina rigs made up of a three-quarter-ounce barrel sinker threaded onto his line above a barrel swivel and a leader of 20-pound-test monofilament.

His preferred hook is one of light-gauge wire, little more than a bream hook.

“It’s small, but you don’t have to worry about a flounder straightening it out,” Chapin says. “And the fish will have a hard time letting loose of it.” 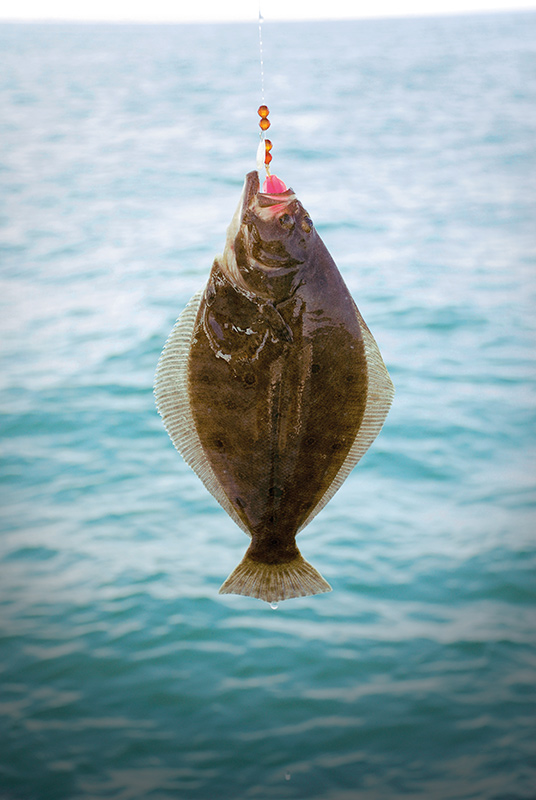 Flounders frequently disappoint anglers at boatside. It’s best to get a landing net under them. Often, they chomp down on a bait or lure without getting hooked and then release it as the angler goes to lift them from the water, setting themselves free and leaving anglers to harmlessly cast epithets at them.

Chapin baits his rigs with greenbacks — not dollar bills, but fish about three inches long and known more formally as pilchards — or bull minnows.

“I lower my baits to the bottom and then raise them a little about every 10 seconds or so,” Chapin offers. “The bite is a light tap, tap — really faint. I count to five after I detect a hit to make sure the fish has swallowed the bait and isn’t just mouthing it. Then, I don’t set the hook, I just start reeling. That light wire will stick ’em most every time.”

Chapin encounters flounder in the fall on their way out of town, as it were, on shallow-water wrecks often inhabited by typically insatiable giant Goliath grouper.

“I know the grouper are still down there, but they must ease up on their eating after summertime because they could gobble flounders all day long if they wanted to,” Chapin surmises.

In the dead of winter, when the flounder are offshore getting their spawn on, Chapin focuses on other species — redfish and sheepshead. You would have a hard time detecting that light bite he describes in 100 feet of water.

Capt. Krista Miller of Island Charters (St. George) has a secret weapon when it comes to flounder fishing — her brother. Bro holds a license to sell fish and specializes in reliably procuring flounder for a small collection of customers. He shares some of his spots with his sister, but there’s no way that you’re going to get him to the phone to speak to a member of the media.

Miller discovers spots on her own when she conducts gigging trips at night and then returns in daylight hours to areas where she spied flounder on nights before.

Miller is among those guides who like to ambush flounder at the pass as they head out to the Gulf in the fall or return to the shallows in the spring.

“We catch ’em coming and going,” Miller says. “They are pretty thick during the run. I like to use greenbacks, but they like shrimp, too, or even artificial lures. They’ll hit about anything if you dangle it in front of them.”

But Miller, like Chapin, doesn’t pursue flounder to their offshore winter haunts.

So, it seems that the fat, flat ladies enjoy a well-deserved reprieve from fishing pressure when they unite with those slacker males offshore.

Round here, that’s mostly true as an accident of underwater topography. Running due south from St. Marks, you can run 40 miles before arriving at 50 feet of water and a sand bottom to the flounder’s liking.

But divers operating from points west — Port St. Joe and Panama City — make a killing on flounder during dry-suit season.

“Once the water dips below 72 degrees, the flounder stack up on our nearshore wrecks,” enthuses divemaster J.D. Moore at the Diver’s Den scuba center in Panama City Beach. Plus, flounder get a little silly, like deer in a rut, at spawning time.

“It’s so easy that really you could get ’em with a knife,” Moore says.

But poke poles — basically shafts with a point on them — are preferred. Some divers fashion their own, but commercially produced poles equipped with paralyzing tips and floppers (like those on a toggle bolt) that keep fish from slipping back off the shaft come in well under a hundred beans.

So know that flounders, as much as they’d like to be, are never quite out of reach.