What You Didn't Know About Vinegars

From Ancient Cure-All to Modern-Day Miracle Worker, Vinegar is a Healthful Obsession

No doubt on more than one occasion you’ve asked yourself, “Self, what could beer, rice, apple cider, wine and plums possibly have in common?”

As it turns out, not a whole lot. Except, of course, that the juices from all are capable of being magically transmuted into a substance so bold and beautiful, it can only be defined by its given name — vinegar. 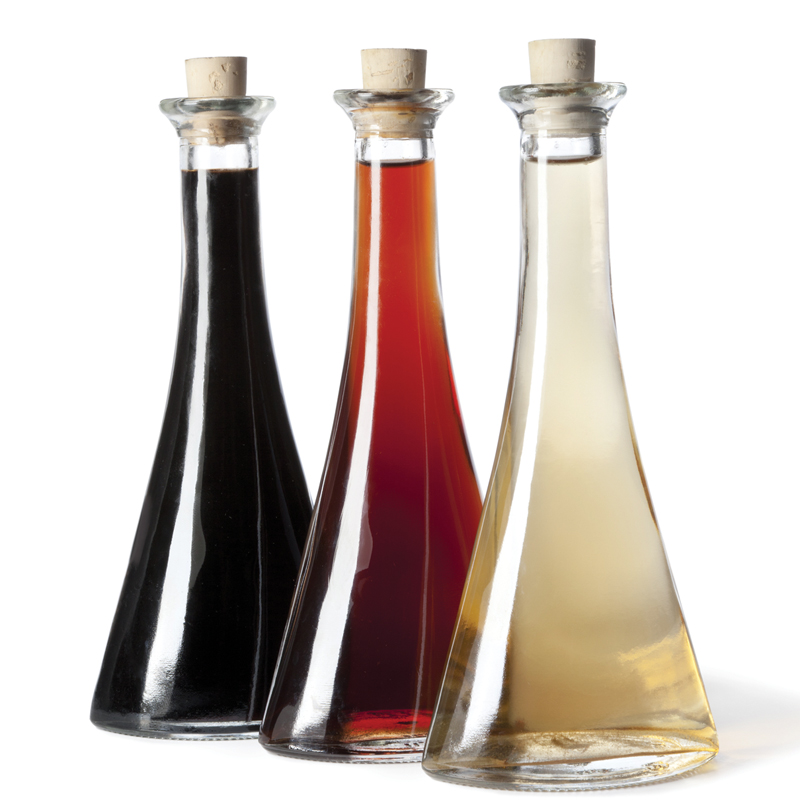 The happy byproduct of aging alcohol and bubbling bacteria, vinegar (vin aigre means sour wine en français) is produced when fermented liquid is left to its own devices. Boasting a complex, zingy flavor, vinegar has been revered throughout history as a culinary delight, with the added attraction of being a medicinal miracle worker.

One of the earliest wonders of the ancient world, vinegar was first referenced in the texts of Babylon as far back as 5,000 B.C. Ancient homemakers swore vinegar was as skilled at preserving food (indeed, the first step towards pickling) as it was at cleaning scraped knees and soothing scratchy throats. Before long, vinegar had landed in nearly every pantry in Mesopotamia.

Its popularity flourished throughout the ages. By the late 1340s, when the Black Death had the majority of Europe in its toxic grip, four cunning French thieves reportedly made a vinegar concoction so potent that it could ward off any contagion from the horrible disease — conveniently allowing them to ransack the homes of recently deceased victims.

In a plea for leniency, legend says that the outlaws gave their secret recipe to authorities, who in turn distributed their instructions, posting the formula initially in the city of Marseilles and later throughout the rest of France.

According to Moore, flavoring meats as well as vegetables with vinegar is an ideal way to cut out excess sodium and fat.

“Anybody can use vinegars”

Recommended Moore. “Even if you have heart disease, diabetes or kidney disease, you can use it. The one thing that someone might want to be cautious with is that distilled vinegar is gluten free, but some vinegars do have gluten in them.”

The newest trend for getting fit quick is to take a shot of apple cider vinegar in the hopes of curbing one’s appetite or slowing down the digestion process. Experts say it’s simply a fad right now.

“I’m not saying it’s not worth it,” Moore said, “but there’s just not a whole lot of legitimate research to back up those claims in my professional opinion. But at the same time, I think vinegar is a great food to incorporate into your diet.”

While the jury is still largely out on the conclusiveness of vinegar’s health benefits, one thing that doesn’t need quantifying is how delicious it can be. A versatile and readily adaptable ingredient, vinegar (in any of its forms) makes for a tasty addition to nearly any dish.

“I tell people it can start out in your appetizer and go right down through to your dessert,” enthused Patricia Rohling, proprietor of Tallahassee’s first olive oil and vinegar specialty boutique, Smashing Olive. “Balsamic vinegars in particular are great as finishers. If I’m grilling a nice piece of meat, I’ll usually take balsamic vinegar and mix it with oil. It’s just great as a finishing oil.”

Take 3 pints of strong white wine vinegar and combine the following ingredients: a handful of wormwood, meadowsweet, wild marjoram and sage, 50 cloves,
2 ounces of campanula root, 2 ounces of angelic, rosemary and horehound, and three large measures of camphor. Place mixture in a container for 15 days. Strain and extract liquid, then bottle. To use, moisten hands, ears and temples periodically or when approaching a plague victim. 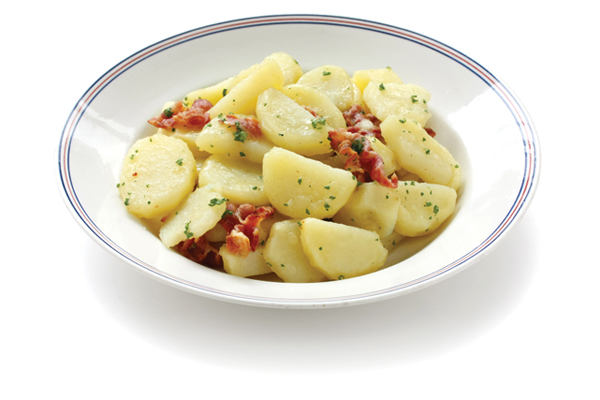 Bring potatoes to a boil and cook for 10 minutes, or until tender. Drain and allow to cool.

Fry bacon in a large deep skillet over medium-high heat. Once crispy, remove from pan and set aside.

Utilizing a portion of the bacon’s grease, add onions to pan and cook over medium heat until caramelized. Add the vinegar, water, sugar, salt and pepper to pan. Bring to a boil.

Combine potatoes and parsley, and top with half of the bacon, crumbled. Allow to warm thoroughly on stovetop. Transfer mixture to serving dish or bowl. Crumble remaining bacon over the top. Serve warm or cool.