What Would the Dowager Do?

Downton Abbey Provides a History Lesson Along with the Drama 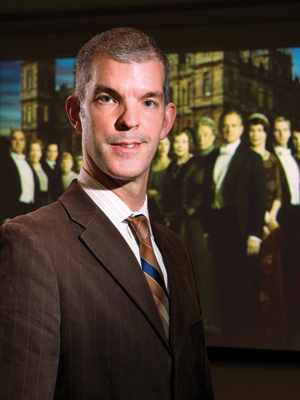 Professor Upchurch is the author of “Before Wilde: Sex Between Men in Britain’s Age of Reform” (University of California Press, 2009).

Many had dressed in Edwardian garb and plunked down $40 for the fun of seeing an advance screening of Season Three’s premiere episode of the wildly successful highbrow serialized soap opera. Tea and crumpets were served up by WFSU volunteers, and context was provided by the professor, whose own fascination with British history was stoked by PBS costume dramas like “Upstairs Downstairs,” which he watched as a kid growing up in North Carolina.

Now a tenured grownup in his second decade of teaching, Upchurch’s research centers around British gender and social history. That made him the perfect choice to help public broadcasting patrons get inside the heads of the fictional residents of the fictionalized version of the real Highclere Castle as reimagined by real Oscar-winning screenwriter Julian Fellowes.

Because the eight-episode season of the Public Television drama is wrapping up and we can’t get enough of “Downton Abbey,” we sat down with Upchurch at the Red Eye in Midtown for coffee and more context. 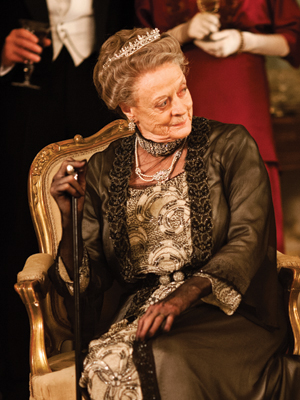 The acerbic Dowager Countess of Grantham (actresses Maggie Smith) embody the societal changes afoot in the world during the 1920s.

TM Season Three opens in the spring of 1920. Lord Grantham has lost the family fortune, and the servants are worried about their jobs. Contemporary audiences can relate!

Upchurch They can. World War I changes what countries think they may and may not do to manage the industrial economy. At the start of Season Three, the aristocracy is trying to hit the reset button, but too much has happened. When the “Downton Abbey” story began in 1912 with the sinking of the Titanic, only men of property, like Lord Grantham and Matthew Crawley, could vote. Lord Grantham’s mother, the Dowager Countess, could vote in local elections affecting matters of “social housekeeping”… schools and poorhouses. The war changed that, too. How could you deny the vote to men like Thomas Barrow, the conniving footman who had served, however dishonorably, in the trenches, or women like Matthew’s mother, Isobel, who through sheer force of will, converted Downton Abbey into a hospital?

TM You spoke to Lord Fellowes before your presentation for WFSU. What makes him such a compelling storyteller?

Upchurch His writing is informed by his acute awareness of the recentness of (the British) Empire. The characters are fictional, but their behavior is entirely in keeping with the real universe they inhabit as they try to adjust to the new realities, which are so different from the world as it was in Season One. Lady Sybil, for instance. She went to the political rally, but she did not speak. It would have been unseemly. It would not have been done by a woman of her social class. By the start of Season Three, she has defied her father and run off with the chauffeur.

TM History majors are like four year olds who can’t stop asking, why? Why? Why?!! They keep The History Channel in business.

Upchurch As historians, you spend years of your life before there’s a professional payoff. But people, living or dead, are interesting, and there are all sorts of dark, archival sources out there. Great stories hide in plain sight, waiting for someone to tell them to the next generation. Season Two was airing while I was teaching British History from 1714-1870. We’d spend a few minutes at the start of class gossiping about the Granthams.

Upchurch But just for a few minutes. A typical semester consists of almost 30 classroom lectures and a dozen discussion periods, and it’s not enough. The higher you pitch the class, the more they respond. I’m thrilled with the quality of thinking reflected in students’ research papers. If we give them the dates and details and a close analysis of the people and events of an era, they will have the tools to figure out for themselves why things turned out the way they did.

TM As opposed to telling them what to think?

Upchurch Exactly. History prepares you for a great many careers. Our students can analyze a text. They are better writers and critical thinkers. They have a better understanding of the way the world works.

TM Why does history repeat itself?

Upchurch Human motives are consistent. History is the story of how society allocates pain and power. As historians, we look for those patterns and try to understand them on the unique and endlessly interesting terms of the society and the personalities of the people who inhabited those times and places.

Professor Upchurch is the author of “Before Wilde: Sex Between Men in Britain’s Age of Reform” (University of California Press, 2009). The book explores the ways in which class influenced the interpretation of same-sex desire in the period when the British state first began to police sex between men. It is the first work to call attention to the widespread reporting of court cases related to sex between men in mainstream London newspapers between 1820 and 1870. It also places family reactions at the center of the narrative, in order to better understand how these acts were understood within the broader culture. While continuing to work in the areas of gender and sexuality, Upchurch is also researching a book that investigates the ways in which working- and middle-class individuals appropriated aspects of the work of Adam Smith for socially progressive ends in the decades before the major publications of Karl Marx.