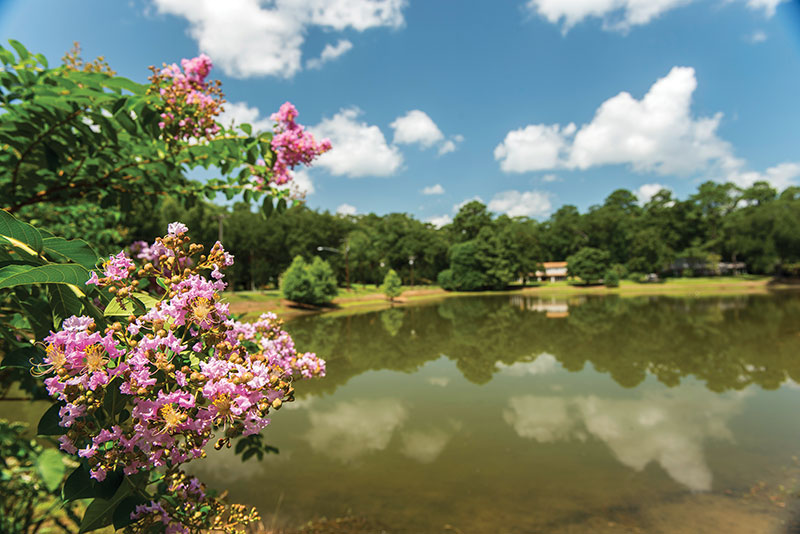 Waverly Pond is a popular gathering spot for community events.

The onetime hunting and fishing plantation has evolved over the past half-century to become a highly sought-after community of more than 400 homes. Indeed, Waverly was named Tallahassee’s best large neighborhood of the year in both 2009 and 2014.

Named after the novels written by Sir Walter Scott, the Waverly Hills neighborhood is tucked off Thomasville Road, across from Tallahassee Nurseries. It’s convenient to Interstate 10, Market Square, downtown Tallahassee and Midtown. In addition, Waverly Hills lies within some of the area’s top school zones.

For longtime resident Barbara Davidson, the Waverly Hills community is much more than convenience, scenery and awards. She has served as both president and secretary of the volunteer homeowners association board.

“Waverly is such a desirable neighborhood. I am proud of Waverly and would not want to live anywhere else,” she says.

As a Realtor, Davidson knows what homeowners want in a community. Waverly Hills has no homeowners association fees; instead, the association asks for donations every three years and always receives more than enough to support its projects. That’s impressive, because the board is active with plenty of initiatives.

“We have few rules and get together often at beautiful Waverly Pond for food truck Mondays, potluck dinners, ice cream socials, egg hunts and movie nights. We sponsor garage sales, a book club and have a quarterly newsletter,” Davidson said.

These activities make for a close-knit community, one in which residents look to help each other out. For example, Waverly is home to a Little Free Library built by resident Pam Flynn. Operating on the honor system, the library invites residents to take or leave books.

“We take pride in how we look and like residents to maintain their homes and yards,” Davidson says. “But we know that can be very difficult at times for many reasons, so we encourage neighbors to help neighbors.”

Joe Manausa, a local real estate broker with 23 years in the business, is intimately familiar with Waverly Hills. A former resident of the neighborhood, Manausa reports that Waverly Hills is both mature and popular.

“There are homes built in the 1960s and 1970s, some renovated to current standards, some still sporting lime-green shag carpeting, but this place has got it going on,” Manusa says. “Sitting on more than 400 wooded acres and centered on Waverly Pond, Waverly Hills has much of what Tallahassee’s homebuyers are seeking today in Midtown.”

How much will a home in Waverly Hills cost the average homebuyer? Surprisingly, not an arm and a leg. According to market data gathered by Manausa, the average value of a home sold in the neighborhood this year has been approximately $125 per square foot, with most homes falling between 2,300 and 2,700 square feet in size.

“If you want a large house at a far-less-than-large price, Waverly Hills continues to deliver value in the Tallahassee real estate market,” Manausa says.

Last year, the neighborhood saw a 5 percent increase in home values, and this year is looking just as promising. Affordable, consistent, convenient and charming, the Waverly Hills neighborhood is sure to remain popular for decades to come.