The gator appears happy, and why wouldn’t it be?

At 32 feet, it surely has nothing to fear or worry about. Its eye suggests mischievousness and its hide, all but devoid of green, is given instead to mostly blues and reds.

Created at the rate of a little less than two feet per hour, this gator lives in Thomasville at the UnVacant Lot, a space once weedy and ignored, but today chockablock with public art. We will call it Wally Gator, and it is the mural of this story.

Darlene Crosby Taylor, the public art director for the Thomasville Center for the
Arts, got to know the artist Toni Ardizzone last December when the center hosted an exhibition of her work.

“I really hit it off with them,” Ardizzone said. “It’s a really cool place, and they’re doing cool stuff.”

Things went so swimmingly that Ardizzone received an outsized commission. That is, the center enlisted her to fill boards affixed to an exterior wall at the UnVacant Lot with art.

Taylor and Ardizzone brainstormed a few ideas. The boards had been arranged to create a strongly horizontal space. Probably a landscape, the women thought, until the notion of a gator — Aha! — occurred to them.

“Maybe because I am not from the South, alligators are still so intriguing to me,” Ardizzone said. “Sometimes, I go down to St. Marks and see one, and that is so cool. They are fun with all their different textures and their form.”

Ardizzone is never heard in speech to shorten “alligator” to “gator.” Like she said, she’s not from around here.

She grew up in Indianapolis, earned her bachelor of fine arts degree there and moved to Austin, Texas, 10 years ago. It’s more artsy than Indy. Three years ago, she moved to Tallahassee to begin work on her MFA at FSU.

When she told her father — a college sports fan whose team is Notre Dame — that she was enrolling at Florida State, he commented, “I never would have seen you as a ’Nole.”

Ardizzone confesses that she “has no idea what’s happening in any sports world.” She easily could have painted a gator mural in CollegeTown. “Someone would have had to tell me that it was maybe a bad idea,” she said. 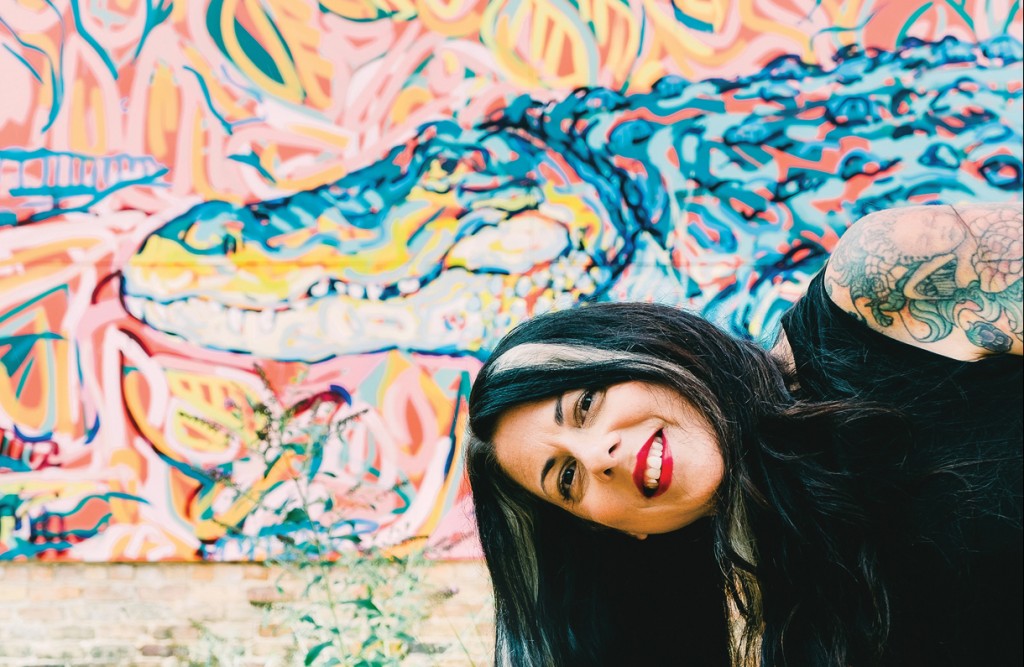 At FSU, Ardizzone stayed in the art zone, spending 60 hours a week or more in a studio on campus. She is grateful that she had such unlimited access to a studio, an advantage she said she would not have enjoyed at bigger art schools. She graduated in May.

While she views Tallahassee as a small town, Ardizzone’s FSU experience was large. As a ’Nole, she studied in Canada and Argentina, attended art fairs in New Orleans and Miami and conducted research in New York City. She gave shoutouts to the members of her thesis committee: Mark Messersmith, Lilian Garcia-Roig and Carrie Ann Beade, who introduced her work to folks in Thomasville. And, she is thankful for her mentor and friend Cynthia Hollis, “who has never missed an exhibition of mine and whose feedback I always trust.”

Ardizzone likes to infuse dark subjects with bright colors from the vibrant palette she favors. Wally was no exception. She has a thing for skulls and buzzards. Her first mural, in Austin, was a blue-haired Frankenstein.

Ardizzone, who once painted houses, spurns spray paint in creating her murals, preferring brushes and rollers. That preference makes painting on textured surfaces like brick a chore, but she persists.

“Painting on a large scale is really a whole different thing,” Ardizzone said. “I tend to work in what most people would describe as freehand. I don’t usually use a projector. I’ll just have a couple of images printed out on regular 8½ by 11 paper or I may have them on my phone, and I just go for it. So the way I work takes a lot of backing up and inspecting my progress and making sure that the scale is in proportion.”

Otherwise, you might wind up with a reptile with too much head and too little tail.

“I’m very happy with it,” Ardizzone said of her alligator. “It turned out. The weather was perfect, and it happened smoothly.”

Going forward, Ardizzone hopes to exhibit in New York or Los Angeles, to continue to widen her audience and to paint murals internationally.

But one suspects that she will retain a fondness for the South.