The Time I Stole the Governor’s Dog 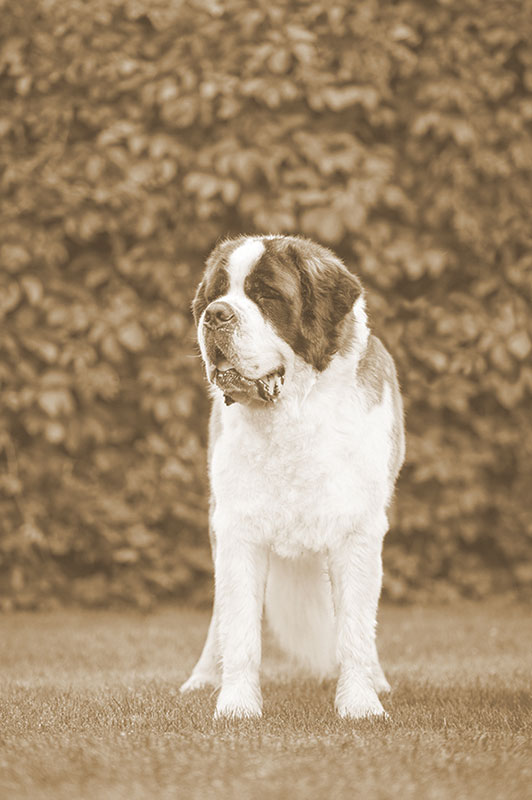 It was a summer afternoon in 1930 when I stole the governor’s dog. I tried to convince myself that the dog followed me home, so it wasn’t really stealing. But I was a seven-year-old Sunday school boy, and I knew that a dog lured by food was not following of his own free will, exactly.

That afternoon I had walked over to my buddy’s house to play. Joe lived on North Adams Street, just two blocks from the governor’s mansion in Tallahassee.
Joe’s mother gave us peanut butter sandwiches and milk for a snack. I didn’t eat the crusts and, since my mother always said that it was bad manners to leave the crust, I stuffed them in my pocket.

I forgot about them until I saw the governor’s dog as I was walking home. At first I thought is was a baby lion sprawled on the sidewalk, sleeping in the sunshine. I had seen Governor Carlton’s orange St. Bernard several times as I passed the mansion, but he never looked so big before. I thought: This might be a lion; the governor’s dog could be inside, and this could be another animal altogether.

It lay across the sidewalk. I would either have to step off onto the governor’s grass, or try to jump over a creature that might be a lion.

The animal raised his head as I approached. I stopped. He stood up. We looked at each other for a long moment, then he moved toward me, wagging his tail. I remembered that dogs wag their tails when they feel friendly, and cats wag their tails when they are angry. Lions are cats. Was I confronting a friendly dog or an angry lion? Better not take any chances. I needed a peace offering. That’s when I remembered the crusts in my pocket.

I held the bread out, and he took it from my hand. A lion would not do that: this must be the governor’s St. Bernard after all. Besides, he didn’t have a mane. I offered him another piece of crust as I walked past him. That’s when he started following me.

The route to my house on North Monroe Street was along the driveway through The Grove, which in those days was a hotel for Yankees in the winter. At the end of the driveway I walked along the edge of the pasture where Mrs. Hunt kept her cow, then through some woods and I was in my backyard.

“Lion,” which was the name I decided to give the dog, followed me through The Grove property, enjoying bread crusts along the way. He wanted to be my dog, not the governor’s.

I hoped Mrs. Hunt’s cow would not mistake Lion’s orange coat for something red, and charge at us!

I decided it would be better if no one at my house knew about my new dog. They might want to shoo him away. So we went to the front porch to decide what to do. I sat on the top step, and Lion curled up on a patch of sunlight on the porch. I put my hand on his paw and told him to go to sleep while I figured out where I could keep him.

It was nice sitting on the porch with Lion, patting his paw, the sun turning his orange coat to pure gold. He was my dog and I was his boy. We would go everywhere together. At that moment, my soul knew a contentment and a joy that has rarely been equalled in my lifetime.

Then I saw it: the long black limousine slowly moving up Monroe Street! The uniformed chauffeur was looking first one way, then the other. I held my breath. Maybe he wouldn’t see Lion. I shifted my position, trying to hide my dog.
Lion was too big. I couldn’t shield him from view.

The limousine moved toward our house. The chauffeur looked our way. He stopped and gave a sharp whistle. Lion jumped to his feet, bounded down the steps and leaped into the open door of the car. The chauffeur drove away with Lion sitting on the seat beside him.

The limousine made a U-turn at the end of the block and passed by me on the way back to the mansion. I waved good-bye to Lion. And he smiled goodbye to me.

This story originally appeared in the Summer 1983 issue of Tallahassee Magazine.