It was a time of conjecture and even mystery. Strange words like “scoria,” “ash,” “pumice” and even “volcano” seemed to hang on every lip. All eyes strained toward the southeast where, some 30 miles distant from Tallahassee, in the heart of the great Wakulla Swamp, a column of dense smoke rose almost daily, year after year, never varying in its location. Numerous theories as to the origin of the smoke abounded: a “lost” volcano, a moonshine still, a camp of renegade Seminole Indians, even perhaps the Devil’s Tar Pit, replete with its legion of lost souls. During the 1870s and 1880s, numerous expeditions were launched to solve the smoky enigma, but all returned disgruntled, defeated. It was, as one New York newspaper aptly put it, “one of the greatest mysteries of our century.”

Following is a series of legends that have long puzzled both citizens and historian alike and — who knows? — some of them could actually be true! 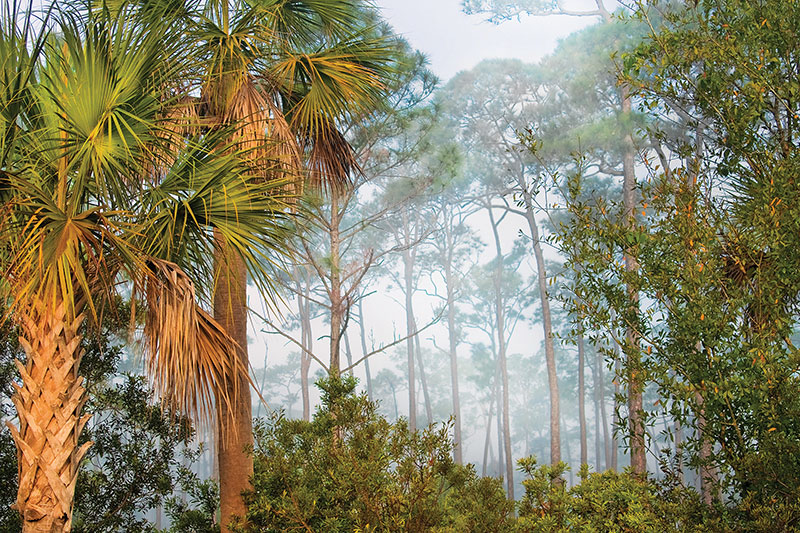 There are actually two accounts of the famous volcano of the Wakulla Swamp: the conventional one, as depicted in the articles and books of various authors and reporters (usually not native Floridians), and a somewhat different one gleaned from the local literature (especially newspapers) of the day. The conventional story runs something like this: From the earliest days of Florida’s settlement, perhaps even going back to deSoto’s invasion of the state in 1539, there has been seen from any high elevation in or near Tallahassee a large column of smoke emanating from the Wakulla Swamp some 30 miles southeast of the city.

Various expeditions sought the source of the smoke but all of them failed, their members returning exhausted and ill from yellow fever, malaria and even snake bites. A certain northern newspaper (usually cited as the New York Herald) even offered the sum of $10,000 to anyone who could solve the mystery — a reward that was never collected.

In 1886, a major earthquake rocked the city of Charleston, South Carolina. In Florida, church bells in St. Augustine were set to ringing and the water in Lake Jackson suddenly vanished. Only minor structural damage occurred in Tallahassee itself, but this was nothing compared with what happened to the volcano: It disappeared! No doubt a hapless victim of “subterranean commotions,” its smoky plume was never again seen rising over the North Florida landscape. Recent research, especially in period newspapers, provides, however, a considerably different story.

Accounts that the volcano smoke was sighted as far back as the 1820s, or even back to deSoto’s arrival, seem insupportable. Instead, a shorter lifespan from about 1875 to 1893 appears far more likely. Concerning the numerous attempts to locate the volcano, however, there can be no question. In 1875, an expedition sailed from St. Marks, eastward along the Gulf coast to the mouth of the Pinhook River (about 10 miles east of the St. Marks lighthouse). Nearing the mouth of the river, the members were surprised to see a town with chimneys and “gable ends of houses.” It soon proved, however, to be a “mirage,” with the large rocks of “Red Fish Dar” supplying the “chimneys.” Suggestively, the expedition leader mentions that in addition to the “cool water” stored aboard, “other fluids” were available to party members.

Traveling up the Pinhook River, the expedition plunged into the dense swamp. They soon discovered an “immense rock rising to the height of 100 feet from its base.” It appeared to be an “inverted cone” and was “undoubtedly the cone of an extinct volcano.” Fragments of the rock were reported to be light like pumice, and an abundance of “scoria” and “ashes” were found near the scene of the “volcanic disturbance.” The most amazing incident of the expedition was, however, also a rather amusing one.

One dark night, the explorers were startled to see “an immense glare in the heavens, just in the direction of the volcano.” Determining it to be about five miles distant, they began hacking their way toward it. It proved to be a devilishly long trip. All night was consumed without the volcano getting any nearer. It was not until the group returned to Tallahassee that they discovered that what they had actually been pursuing was a large fire in the business district of Monticello, some 20 miles away!

Probably the most famous of all expeditions occurred in 1876. Financially underwritten by the New York Herald, it spent 10 fruitless days searching the swamp. One expedition member became locally notorious by falling out of a tall tree that he had climbed to get a better view of the smoke. The reporter accompanying the expedition allegedly became ill with fever and died before the group could return to Tallahassee. Once back in town, the party members refused to talk about their experiences, saying that a full account would appear in an upcoming issue of the New York Herald. Strangely enough, a careful perusal of the 1876 editions of the newspaper shows that it was never published.

Throughout the 1880s, the volcano sightings increased. The New York Times, quoting the Tallahassee Patriot of June 12, 1880, reported that a loud rumbling noise from the volcano was frequently heard in Wakulla County. The sound was so intense that it caused the sleeping family of a Mr. Frank Duggle to “get up and run outdoors, thinking another earthquake was at hand.” The volcanic discharge itself resembled “a large fire shooting its flaming tongue high up into the upper realms, frequently reflected back by passing clouds.”

Probably the biggest misconception about the Wakulla volcano is that it vanished after the 1886 Charleston earthquake. What actually seems to have happened is that the volcano went “dormant” (no sightings) for about four years, then reappeared. In 1890, J.C. Powell, in his classic book “The American Siberia,” noted that at night, under favorable atmospheric conditions, a “strange vivid illumination” lit up the sky to the southwest of his convict work camp in Jefferson County. He scoffed at the idea that it was an illicit moonshine still, but he could not explain its origin.

Finally, in 1891, the Jasper News reported that the smoke from the volcano was easily seen daily from the top of the Leon County Courthouse.

In 1893, the unthinkable finally happened — the volcano was proclaimed found! In an account that has a ring of authenticity to it, a phosphate prospector named Martin claimed to have discovered an “expanse of burning earth” deep within the swamp. The air was filled with smoke and the ground honeycombed with holes made by fire. A booming sound, like that of a cannon, was also frequently heard.

He found no “crater,” ash, scoria, pumice, or volcanic material of any type. Instead, he observed that the ground was covered with a layer of thick roots and “coarse vegetable fibers protected by a waterproof moss, like an immense peat bog.” It was this vegetable layer that had burned for untold years. After 1893, reports of the volcano’s smoke cease. In 1894, a large expedition financed by the Florida Times-Union (Jacksonville) combed the swamp but could find neither a crater nor even a wisp of the fabled smoke.

As the 20th century dawned, the volcano slowly slipped into history, a curiosity remembered by only a few old-timers who had been lucky enough to see the smoke from the “wonder of the Wakulla Swamp.” 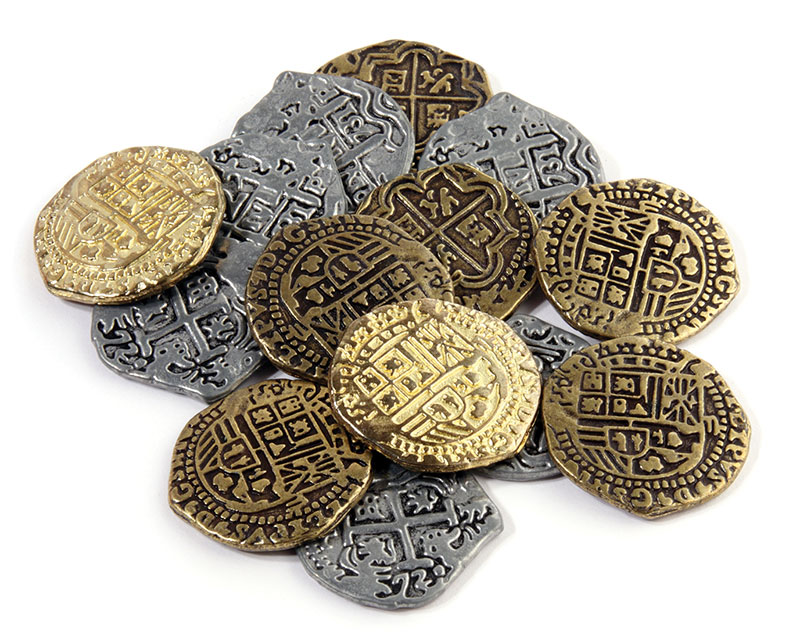 Although lacking in precious metals and minerals, North Florida’s Gulf coast is nonetheless rich in stories of lost gold and pirate treasure. Her sparsely inhabited coastline was the haunt of various well-known pirates, including Blackbeard, Jean Lafitte, Billy Bowlegs and others. Even today, old-timers talk about secret finds, and occasionally an old gold coin will be found along the beach after a particularly severe storm.

On Bald Point, in Wakulla County, Billy Bowlegs supposedly buried three chests near an old palm tree. He fixed the location by carving special marks into the tree. Nearby is a small freshwater spring with marked stones encircling it. Near the mouth of the Ochlockonee River are buried several chests of pirate gold. Supposedly, after crossing the bridge over the river, a large Indian mound, on the left-hand side, marks the treasure site. In the 1920s, state highway workers allegedly dug up the area searching for the booty, but none was found.

Probably the most famous lost-treasure story involves the small town of St. Marks. A Spanish gunboat loaded with
$5 million in gold foundered off St. Marks. Fearful of pirates, the captain of the vessel buried the gold ashore. After doing so, he returned to his wrecked vessel, from which he and his crew were rescued by a ship bound for Peru. In the ensuing years, several members of the gunboat’s crew returned to the area to find where the treasure had been secreted. None, however, were successful.

During the Civil War, a local resident of St. Marks, known only as Mr. Smith, somehow came across a map of the treasure site. The spot was indicated by three large trees, into one of which an iron spike had been driven. Finding the tree with the spike in it, Mr. Smith began digging. Day after day went by as he unsuccessfully sought the hidden gold. Armed with only spades and shovels and being an elderly man, he was soon exhausted and discouraged. Finally, the Civil War came to an end and he was financially ruined, losing most of his slaves and property.

After the war, other citizens took up the quest. One of these was George Ladd, son of Daniel Ladd, one of the founders of the nearby ghost town of Magnolia. Unfortunately, he and his assistants could not agree on how the treasure should be divided once it had been found, and they eventually gave up the search. Today, the treasure slumbers unmolested, mocking the dreams of all who tried to find it. But hope remains eternal, and perhaps someday the marshes near St. Marks will be persuaded to give up their golden secret.

The Mystery of Orchard Pond 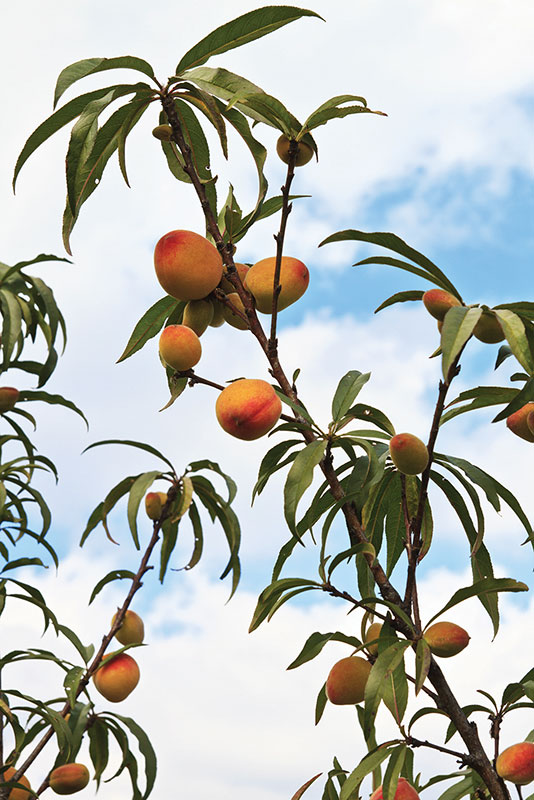 North Florida’s many lakes and ponds have long been a source of universal wonder and amazement. Many of them have the unsettling habit of periodically going dry, their waters vanishing into subterranean outlets. Others flood frequently, inundating nearby property and homes. A few even are formed when the roofs of underground caverns collapse and the resulting depression fills with water. These foundations are usually referred to as “sinks” or “sinkholes.”

Orchard Pond, in northern Leon County, is perhaps the most intriguing of such formations. According to local legend, the bottom of this pond was once a large peach orchard. One day in the early 1820s or 1830s, water began gushing from underground and kept rising until if had covered the entire orchard. Although no one was drowned in the flood, numerous farm buildings and several homes were submerged. At least until the 1930s, locals claimed that many of these structures could still be seen on the bottom. A calm, windless day was best, with the sun nearly directly overhead.

It is tempting to dismiss the Orchard Pond legend as historical nonsense, but one wonders. In 1829, the Key West Register noted that the surface of nearby Lake Jackson had recently dropped 10 feet. Astonishingly, Indian cabins and peach trees suddenly became visible on the lake bottom!

Today, the pond is privately owned and is not open to the public. Bass and bream, not historical relics, are most often brought up from its crystalline depths. Yet old-timers still smile knowingly at the mention of Orchard Pond, and allow that although history may tell some dubious tales, it tells some unbelievably true ones as well.