The Rush to Print

Self-publishing has unleashed a torrent of writers

Since the 1970s, word processing and photocopying, abetted by the advent of personal computers, the pdf, the jpeg, flash drives and graphic software, have become capable, like Shakespeare’s monkeys, of transforming almost any grab bag of words into a book.

The digital revolution has eliminated drafting on paper, that tedious trial-by-dedication of yore. Plus, no matter what combination of words that grab bag might contain, professional formatting lends them a blanketing gravitas! The field has come a long way since Gutenberg’s grand innovations. No more typesetting. No need for 5,000 copy editions. It’s an affordability that has set off an explosive efflorescence of independent publishing, and books march from the kitchen tables of would-be authors like the brooms in The Sorcerer’s Apprentice.

Anyone who can type an email can now sidestep the interference of the hoariest of traditional publishers. Established in 2008, Smashwords, the premier, groundbreaking website for self-published books, now claims to have built a digital catalog of almost 600,000 titles. Smashwords’ founder, Mark Coker, writes earnestly about “democratizing” book publishing through digital technology, a well-intentioned goal with the promise of an alternative platform for independent publishing.

Initially, writers of offbeat and niche material everywhere hailed digital publishing, hoping to see their work presented to a broader world of readers … or any readers at all. But while Coker and later imitators espouse idealistic goals, the result has been a kind of literary populism; truly outstanding material can become lost in a free-for-all of not-ready-for-primetime listings.

On the other hand, and to mix a gargantuan metaphor, ’tis a far better thing to tolerate the feathers with the chicken than throw out the baby with the bathwater! The canon of English literature is filled with examples like self-publisher William Blake, who “pre-sold” his Songs of Innocence — “Tigre, tigre, burning bright …” — by subscription to patrons. Critics originally dismissed Blake’s poetry as that of a mad man, yet later generations have come to regard his poetry as classic.

In the sordid world of commerce, no sooner had Smashwords shown signs of prospering than Jeff Bezos and Amazon elbowed their way into the field, cataloging a pyramid of more than 6 million tributary e-titles. Plus, Amazon stealthily diverted Smashwords’ internet links to itself and eroded both Smashwords’ and its own authors’ source of income by drowning them in a sea of themselves! Consequently, none of today’s overpopulated e-platforms are especially browser-friendly, even if one is on the 200,000th listing page.

Still, hope springs eternal. Today’s indy publisher can do everything from justifying the text to designing a book cover with a reasonable investment of time. One simply formats his masterpiece into a computer e-book file as easily as following a cookbook recipe for a chocolate-covered Turducken. Next, one casually uploads the file to the e-book platform of one’s choice, and Voila! — one is a self-published, indy author waiting for the celebrity to begin and the percentages to roll in!

Paper still confers an extra dollop of prestige, and the process for upgrading to hardcopy requires more or less the same sort of twiddling as the e-book — except that the penultimate digital file needs to be activated by a check to the print-on-demand outfit, like DiggyPOD, that one chooses. Printing costs per copy drop depending on how many are printed at a time — as little as 15 to 20% of the retail per-copy price! Then, in two or three weeks, one has in hand a first edition of The Real Great Adventures of Me!

But heads up! At some point in the process, the intoxicating prospect of publication makes it easy to overlook the expenses of the whole D.Y.I. shtick. Assuming one has a budget, caveat emptor, dude. No sooner do the ghostwriters, programmers and freelance editors somehow get wind of what’s going down than they are all up in your face with tempting words about how much one needs their services to crack the market in New York or Hollywood, while the mother of all expenses — marketing and distribution — also awaits!

With paper books, however, the author may choose to be on his or her own. This has brought about 21st-century independents and a return to the time-honored strategy of the aforementioned William Blake. And be happy one doesn’t have to evade the fate of Johannes Gutenberg.

As big an innovator as he was, they repossessed his printing press!

Novel explores threat to free will

Celeste Johnson, writing for reedsy.com, has favorably reviewed The Colson Legend: Ice Queen, a novel written by Michael Nyikos and published in August 2021. Rowland Publishing provided copyediting and other prepress services in support of the project. Following is an excerpt from Johnson’s review.

In a world where the rise of a billion-dollar organization called the S.O.A.S. threatens to end the existence of free will, the Farisphonites have been able to delay their vision of a controlled society.

After Jack Colson, a lackadaisical high school senior with little motivation to pursue his education, encounters the Farisphonite known as Ava the Ice Queen, he is taken on the adventure of a lifetime. 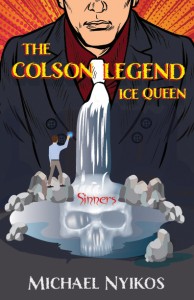 Ava has latched onto Jack, and their combined powers have become a dire threat to Austen Wolfe, the wealthy, egotistical leader of the S.O.A.S. Jack must learn how to use his special powers to understand his symbiotic relationship with Ava. However, Austen Wolfe is in high pursuit, as well as an ex-S.O.A.S. member and criminal, Liam Scarr, who is attempting to break the bond between Jack and Ava.

Jack’s acceptance of the responsibility for Ava the Ice Queen and the protection involved is one in which his moral compass is differentiated from others in that he does not experience detachment from his actions or the events they experience.

The ending satisfies by pointing out that early academic confidence and grades are not the only ways to build confidence, gain leadership skills, and ultimately attain higher education and career success.

The author achieves this theme in an imaginative way without it sounding preachy or predictable. The reader wants to root for Jack and is not disappointed.