The lights go down and the curtain goes up — literally — at the Red Hills Surgical Center’s new observation room, where breathless Florida State University medical students sit in two rows of high chairs to watch the wonders of modern arthroscopic surgical techniques. Only a large pane of glass separates the students from the operating room on the other side.

On twin high-definition television monitors a microscopic, aqueous world opens up before the viewers as surgeons deftly perform repairs on cartilage and tendon inside a knee. Magnified 40 times and flush with saline, the interior spaces resemble an underwater cave, as pieces of tattered tissue float and swirl by the camera like seaweed detritus on the ocean floor. On the outside, the patient’s knee glows from the powerful miniature lights and tools that surgeon Dr. Peter Loeb, of North Florida Orthopedics, uses to scan the field and do his job.

Due to the high magnification, Loeb knows it may be hard for the students to know which way is up, and through his two-way microphone he orients them as they watch the screen inside the viewing room. This talk-back system allows both sides to discuss the case, although for the most part it’s Loeb doing the talking while the students quietly observe the operation.

“I think the program is fantastic,” Loeb says between patients. “We can talk to (the students) at a little different level, so that’s fun. I think this allows them to come in and not have to change (into scrubs) and yet still get the whole atmosphere of what it’s like to be in the OR. It’s a tremendous experience.”

Since the observation room opened in the fall of 2012, hundreds of health care students have been able to “sit in” on real-world surgeries. In addition to medical students, the center hosted students from Florida State University’s College of Nursing, high school outreach programs, Florida A&M University’s School of Nursing, the Tallahassee Community College/Ghazvini Center, Southwest Georgia Technical College, Breckenridge School of Nursing at ITT and Keiser College. 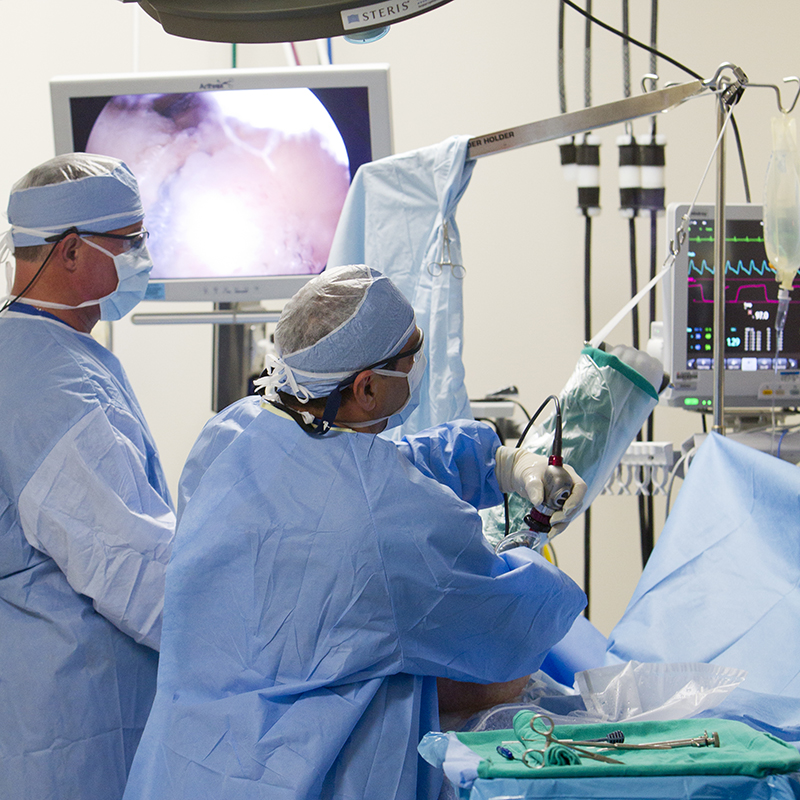 “This was my first time actually sitting in on an orthopedic procedure, and I’m sure that other places where you can shadow are not as convenient as this is for us as students,” he said. “I feel like the teacher and physician were very, very focused on making sure that we were on the same page and that we understood exactly what was going through his mind, and he also did a very good job orienting us. I feel that’s one of the hardest things to do in arthroscopic surgery is actually figuring out your point of reference and where you’re actually looking.”

Another valuable feature of the observation room is it gives students a chance to see several different specialties working in concert. It can inspire them to work in those fields, he said.

The observation room vantage point, coupled with the work of the center’s educational partners, provides a great opportunity for augmenting health care education, according to Janet Shipman, director of educational outreach. She said it’s a needed service, considering it’s getting more difficult for students to get into some hospitals to observe surgery.

“These surgeons here have a passion for education and are willing to volunteer their time,” Shipman said. “A majority of students on all levels have never observed a surgical procedure, nor seen inside the human body. We believe every student leaves in awe of the process, teamwork and commitment required to work in medicine.”

The Red Hills Surgical Center is a joint venture between Tallahassee Memorial HealthCare and several local physicians, Shipman said. The facility, located on the corner of Miccosukee Road and Surgeons Drive, across the street from the Tallahassee Memorial Cancer Center, opened in April 2011. The entire surgical center was a $10 million project, counting land, building and equipment.

Getting the ball rolling to create the surgical center was a joint effort between Loeb; Dr. Duncan Postma, chairman of the RHSC board of directors; health care consultant Mike Guarino and Martin Shipman, CEO of Tallahassee Orthopedic Clinic and a RHSC board member. The observation room — Shipman’s idea  — opened a year after the surgical center.

“The idea … came while I was chairman of the Health Care Roundtable at a time when the health care community was struggling in finding qualified applicants to work in the hospitals, surgery centers and physician practices,” Shipman said. “Understanding that many students that were interested in health care had no true understanding of what some of the roles were. If we could show them a working operating room with doctors, scrub techs, medical supply representatives, nurses, X-ray techs, anesthesiologists, nurse anesthetists — how exciting that would be in whetting their appetites to pursue a profession in health care.”

Students can observe arthroscopic and “open” procedures. Students may find themselves witnessing anything from outpatient orthopedics to scoped ear, nose and throat procedures, depending on which “teaching” surgeons are scheduled at that time. Orthopedic cases range from shoulder and knee arthroscopies, fracture fixation and pinnings, foot and ankle surgeries, and hand surgeries. Some of the ENT procedures may include excising neck masses and sinus surgeries. To maintain confidentiality during a viewing, patients are fully covered and draped except for the small surgical site.

Shipman said that a group of surgeons had already planned a five-room outpatient surgery center, and the plans were being finalized when the idea for an observation room came about.

“All the surgeons were excited and very supportive pursuing the observation room idea, but we were already over budget,” he said. “It was at this time that we approached the Economic Development Council and Workforce Plus about opportunities that may allow us to bring this dream to reality.”

The development team was able to gain ad valorem tax credits and reimbursements of development fees through a special EDC Targeted Sector Program, which allowed them to justify adding the “living classroom.”

“This room has already paid huge dividends to numerous educational facilities in Tallahassee and surrounding areas,” Shipman said. “RHSC and its educational partners are just beginning to realize the incredible value this room will have on generations of students that will pass through the experience of RHSC observation.”