At age 128, the Monticello Opera House enters a new age of music and theater.

Nestled like a dowager aunt — refined and tasteful, if seemingly a bit out of place — the Monticello Opera House sits shoulder by hip with a Marathon service station and a bait store, all circling the gloriously restored pastiche of the Jefferson County Courthouse in the center of the city of Monticello.

Here, magnolias abound, and century oaks arc, even as they share turf with a few pairs of palms. Luckily, the accelerating engines of passing heavy trucks can’t be heard inside the Opera House. Instead, the MOH seems to ignore the noise and the somewhat hard scrabble of its surroundings and lifts its hoary chin as it proceeds into its 128th year.

Now, coupled with the heavy Romanesque-Revival edifice, there comes an enthusiastic and new executive director, Michael Herrin. A Florida native hailing from Quincy, Herrin brings a local perspective and non-profit experience. As an actor appearing at many community theaters (including the Opera House), Herrin is taking on new roles in choosing and booking theatrical productions, conducting group tours, organizing weddings, receptions and meetings, and overseeing expansive renovations begun two years ago. Though he says he’s still learning the history of the building, Herrin is excited by the prospect of what the Opera House is yet to become.

Yet, over the next 10 to 15 years, other distractions began to interrupt the crowds — the First World War, the arrival of moving pictures, and especially the railroad’s shift. They all took their toll. By 1920, the shows had stopped and the building was for a time turned into a movie house. Still later, it was boarded up and for all purposes, abandoned. The thought of the stately grande dame with two-by-fours across her doors feels tragic, but Herrin says its developer had always had plans for the building to be more than just a theatrical venue. And a visit to the sprawling street level galleries are evidence of what Dr. John H. Perkins and architect, W.R. Gunn had in mind.
Perhaps the term, opera house, is misleading. In the South of the late 19th century, there were many “opera houses,” but you wouldn’t have heard Verdi or Wagner there. Instead, minstrel shows, variety shows, and later, vaudeville or burlesque were popular on the theatrical circuit. From the 1890s to around 1900, the Monticello Opera House had its heyday, a time when wealthy Northern visitors would winter on nearby hunting reserves and needed some let-your-hair-down entertainment. 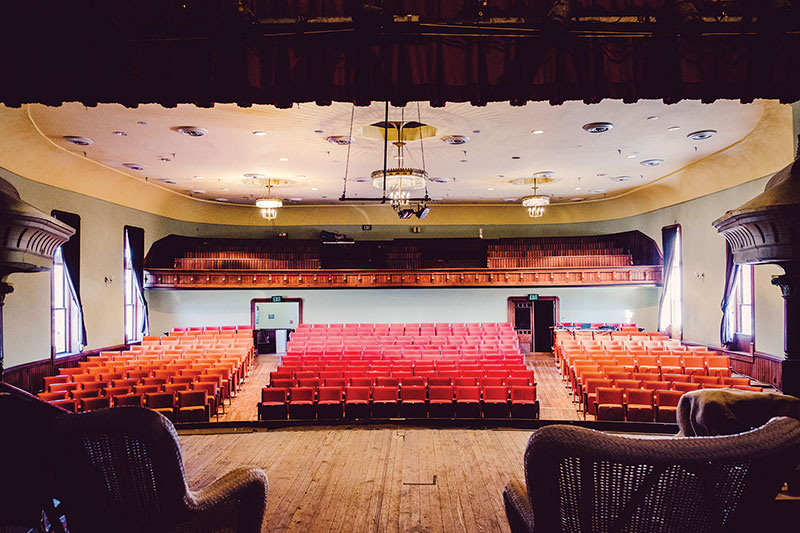 The theater, on the second floor,  includes elaborately decorated Moorish-influence box seats, remnants of the original gas footlights, and a stage equipped with a trap door.  Performers say it has near-perfect acoustics. Photo by Saige Roberts

Perkins had not only an aesthetic sense, but an entrepreneurial spirit, as well. In addition to a world-class performing venue upstairs, he would have shops and businesses in the spaces below. Over time, a butcher shop, a hardware store, an A & P grocery, and later, the town post office all did business out of the Monticello Opera House.  After all, Monticello, at the time of the MOH’s building was on an active railroad line, it had a booming turpentine industry, and think of it, it was once the Watermelon Seed Capital of the World. It needed stores and Perkins thought it also needed an Opera House. Sadly, Perkins would learn what many other developers have — you can’t predict the future. When the railroad was rerouted toward Jacksonville, the wealthy Northern vacationers shifted their allegiance.

“The building is powerfully built,” says Herrin admiringly. Constructed of iron and brick, even the Corinthian-style columns found inside and out are of iron, a “modern” construction material of the age. “Inside, the wood is heart-pine. It is so hard that it’s difficult to drive a nail through.” Awed by the strength of the building, the director says that the renovations, begun in 1972 after the MOH was scheduled to be razed but saved by the community which raised over $1 million to purchase it, demonstrate the structural integrity of the Opera House. It is “something to be cherished.”

But of course, it’s the upstairs theatre itself that is the draw. Unlike more ornate European houses, the MOH could be considered plain. The walls are a pale manila, while the wainscoting and balcony are darkly stained. Overhead, three mirrored and painted chandeliers, which once held gas fixtures, and two stage-flanking boxes that somewhat incongruously appear to be capped with Moorish metal cupolas straight out of Scheherazade give the theatre a sense of the dramatic that must have thrilled early patrons. More importantly, the acoustics are near perfect. Owing to few actually straight lines in its contours and lots and lots of resonating wood, musicians love performing here, many choosing to perform acoustically without amplification.

But what is an opera house without its lore? It is said that the balcony’s pew-like seating was once used to sequester members of racial minorities, who were only allowed to enter through a side staircase tucked in a wall. That trap door in the middle of the stage was called the “hell door” because plays often called for actors to descend to demonic depths.

“And some say Dr. Perkins likes to sit in the box seat to the stage-left of the orchestra pit,” Herrin notes. What? Perkins hasn’t been around for going on 100 years. So, he enjoys watching plays in his non-corporeal state?

Officials at the MOH don’t really like focusing on the “ghost” factor, although Monticello has been written about as “One of the Most Haunted Cities in the U.S.” Yet, when pressed, Herrin acknowledges that in the very small backstage area of the ladies’ dressing room, a tiny figure is from time to time said to “materialize” at the window. It’s a miniscule space, its walls sprinkled with graffiti a hundred years old. With its period costumes, dimly lighted mirror, brick walls and one towering window, it seems there may still be space for an ephemeral presence.

“We’ve had unusual problems with our phones and computers, but I don’t think we can attribute them to ghosts,” Herrin jokes. “Yes, I’ve heard the stories —banging sounds, lights going on at odd times, a possible glimpse of a moving curtain, and a person at the window. But ghosts are not our featured attraction.” What is important to him now is the “living and breathing” that is taking place in the opera house today.

And it’s a great deal. The new metal roof is complete and Herrin says it will last for decades. Next will be the renovated garden behind the MOH. Always known as an elegant wedding venue, the roomy garden with its gazebo and circling plants is planned to be a magical setting. The stained-glass windows and the banquet hall renovation are also on the renovations list.

And Herrin, adjusting to his new role, is in awe at the generosity in time and treasure provided by the MOH’s founding benefactors, grantors, volunteers and the state. 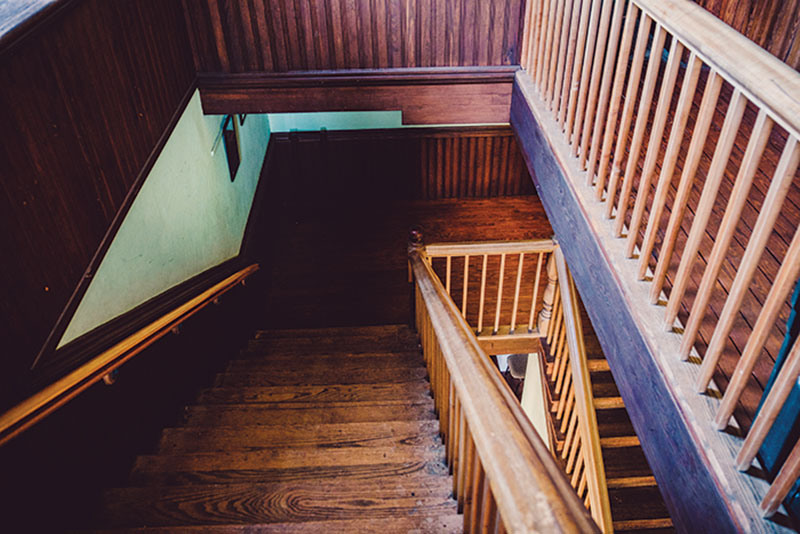 Renovations dating to 1972 preserved the stately staircase and backstage rooms used during performances since 1890. The building was designed by architect W.R. Gunn and built by Monticello businessman John H. Perkins for use as a mercantile center with an opera house. Photo by Saige Roberts

“It takes a tremendous amount of support to maintain this historic landmark,” he says.

The Garden Club of Monticello, the Division of Historical Resources of the Department of State, Farmers and Merchants Bank, the Foundation that supports all of the efforts, and the many private donors, including the Adris, Parker, Poe, Williams, Bassett, and Langford families are all valued at the MOH.

In the meantime, the Opera House Stage Company, the Monticello Acting and Dance Company, as well as concert artists, dinner shows, large-scale holiday celebrations, and shows designed for children will continue to bring quality theatre to Monticello and the greater Tallahassee area.

And don’t worry if one evening as the curtain goes up, a theatre seat with nobody in it seems to sag beside you. Everybody, maybe even those with no bodies at all, love going to the Monticello Opera House.