The Legacy of Two Tallahasssee Families

The names of some of Tallahassee’s most familiar landmarks can be traced to two patriarchs who came here in the early 1800s. Betton Hills, Meginnis Arm (the road name is spelled with one “s”) Lively Area Vocational Technical School, the Meginniss-Munroe House (home of LeMoyne Art Foundation) and Leonard Wesson Elementary School are all namesakes of either one of the two men or their descendants. 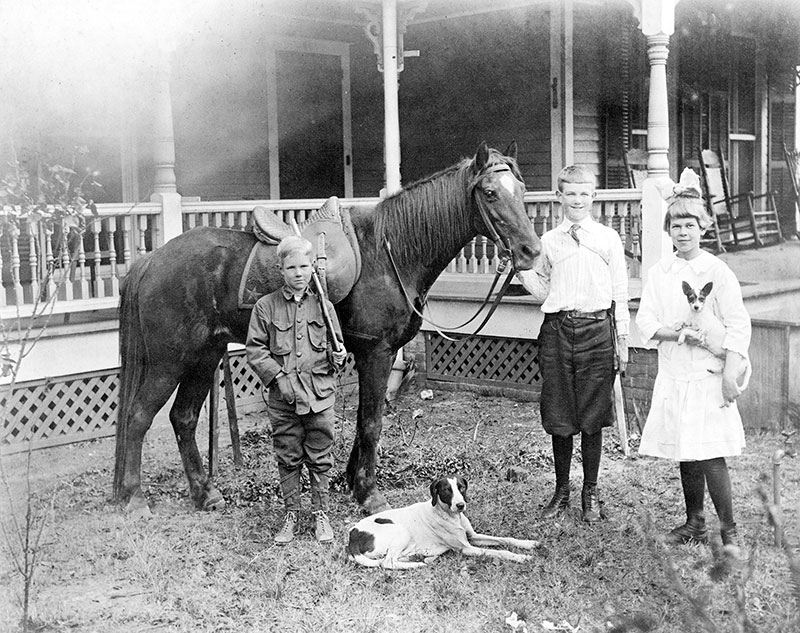 The men were Turbot R. Betton and George H. Meginniss, both from coastal Maryland. Both men were community leaders, wealthy merchants and probably the county’s largest landowners in their day. They were contemporaries, and the lives of their progeny would be intertwined through marriage, children, grandchildren, aunts, uncles and cousins by the literal dozen. As one said, “I call them cousin, whether they may be kin to me or not, for fear of offending a relative.” Together or separately, for several generations the two families would produce some of Leon County’s leaders in education, law, medicine, land and real estate development, and the retail business. A list of the names of the descendants sounds like a roll call of Old Tallahassee: Meginniss, Oven, Munroe, Lively, Carraway, Skelton … but no Bettons. The last ones who lived here moved away years ago.

The story of how Turbot R. Betton and his first wife, Eliza, came to Tallahassee sounds daring, when told by granddaughter Emily Lively: “They joined several other adventurous young couples from Maryland who came to the new territory, looking for an exciting new life on the Florida frontier. (Historian Bertram Groene puts the date at about 1825, saying Turbot Betton and his father, George, opened a general store here in February of 1826.) “They landed at St. Marks, where my grandfather later had a large general store near the docks. The couples came overland to Tallahassee by horse-drawn coach.”

For some of the happy group, the adventurous new life would end tragically. Eliza Betton would die of yellow fever in the epidemic of 1841 that struck the capital. Turbot would make a fortune, lose much of it in the fire that followed the yellow fever plague two years later and regain it, only to lose it again during the Civil War. But first he would help start the territory’s first bank, the first railroad (a mule-drawn affair), the first learning institution (The Leon Academy) and the first Episcopal church, St. John’s.

After Eliza died, Turbot married again. He had only one child by his second wife, Sarah Ann, a daughter, Griselle, who married a druggist from Milledgeville, Matt Lively. Lively later bought a drugstore from Cheever Lewis, who sold his business to go into banking. (Lewis State Bank, now First Florida, was Florida’s oldest bank, and the Lewises are among the old banking families.) Matt and Griselle’s only child was a son, Lewis M. Lively, for whom the vocational school is named.

The Bettons of Betton Hills 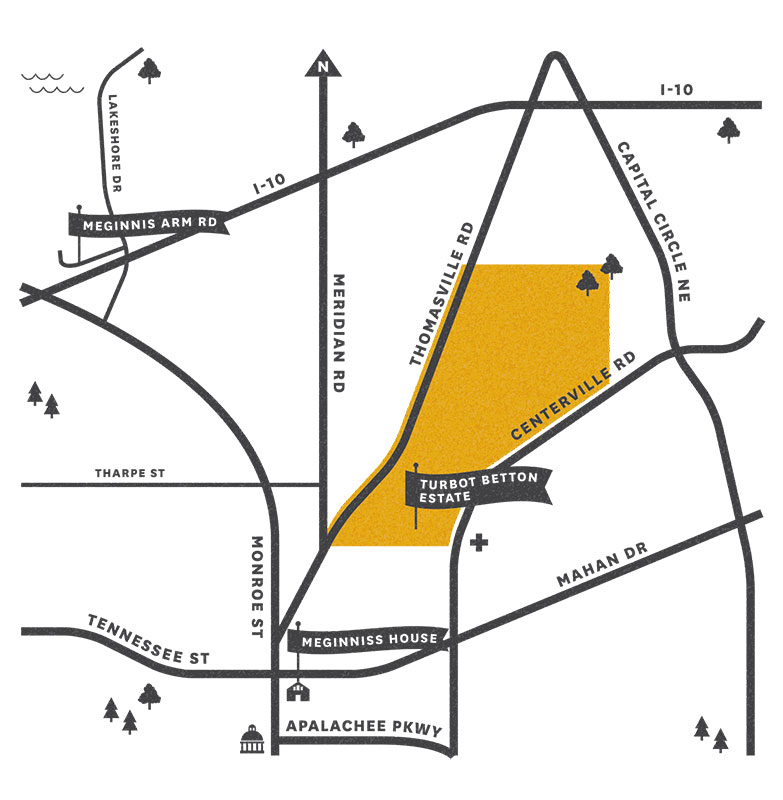 Soon after Turbot Betton arrived in Tallahassee, he bought about 1,200 acres from the Lafayette estate. It lay roughly between Thomasville and Centerville roads south to Seventh Avenue, and north to and including Noble Drive (Betton Woods), Goose Pond and Potter Road on the east.

Will Oven, son of Bershe Meginniss and W.J. Oven, remembers the “modest” home that the wealthy Betton built, near what is now Seventh and Lee avenues. The house was torn down after Gus Winthrop acquired it and began developing it as Betton Hills, naming the rather exclusive area for Turbot Betton.

While Betton built his house in the country, his fellow pioneer George Meginniss built a somewhat more elaborate home almost within the shadow of the Capitol, at 123 N. Gadsden St. For the next hundred years, this oak-shaded, white-frame house would be the home of several generations of Meginnisses and relatives. 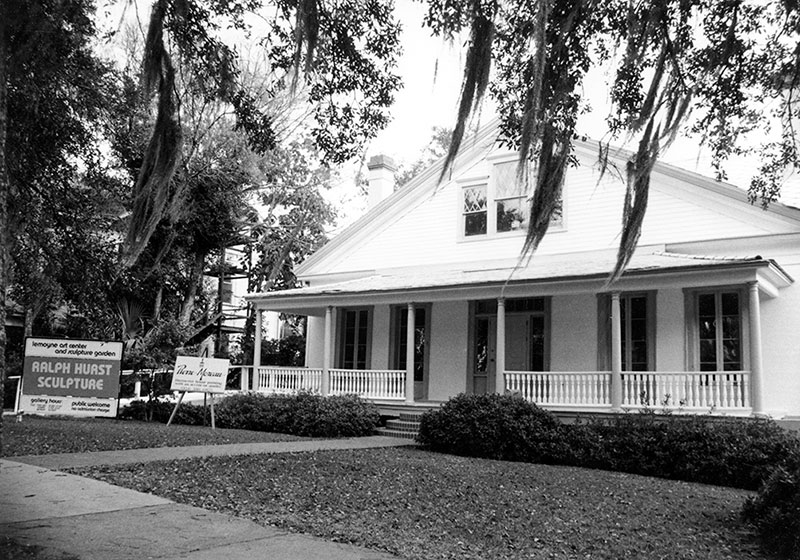 Built in 1854, the house is now owned by Lemoyne Art Foundation. But long before it became a gallery, it was the home of the Ivan Munroe family. Betty Ann Munroe Skelton, great-granddaughter of George Meginnis and a distant cousin of Turbot Betton, remembers the place as a “happy house,” where she and her brother slid down the bannister and found a child’s paradise of adventure, exploring the shadowy corners of the cavernous basement. In 1954, the 100th birthday of the old house, she and her brother discovered, and sampled, some communion wine the women from St. John’s handmade in the early 1900s.

“One sip cured us from wanting any more,” she recalled.

She and her sister Jett, who lost a long battle with cancer in September, invited fellow cheerleaders from Leon High School, and later FSU, to practice in their living and dining rooms.

“It shocked Daddy so to have all those energetic young girls jumping up and down in the house, that he actually had special supports put under the floors to make sure they would withstand all the activity,” she said.

Soon after George Meginniss came to Florida, he was joined by a nephew, Ben Meginniss, who helped him with the business. Several other brothers followed, among them Dan Meginniss, who like his Uncle George, became a big landholder. He owned several thousand acres along the southern tip of Lake Jackson, later called Meginniss Arm, and built a plantation house somewhat more elaborate than Betton’s. Mary Harris, Ben Meginniss’ granddaughter, says she thinks her grandfather lived with his brother, Dan, for a while before he got married. In any case, Mary remembers visiting the old home as a child. It bore none of its original splendor.

“I remember especially the beautiful, solid mahogany staircase,” she said. “I also remember how infuriated my mother was to find later that tenants had burned the staircase bannisters for firewood. Said they were cold and burned the wood to keep warm!”

When Lewis Lively was 5 years old, his parents, Matt and Griselle Betton Lively, died. He was raised by George Meginniss’ spinster daughter, Jessie. George, who died in 1895, had willed the house at 125 N. Gadsden to her. Lewis eventually moved away, but returned with his bride, Frances Scott of Quincy, when he got married, to live in one of the apartments. Lewis acquired the first Coca-Cola franchise here soon after the turn of the century and later converted it into a bottling company. It stayed in the family’s hands until a few years ago.

Emily recalled how enthusiastic her father was about getting a vocational school started here: “It was during the Depression, and people couldn’t get jobs because they weren’t trained for anything. My father donated the vacant upstairs space of several downtown buildings he owned as a place to start training. Then he went around begging for equipment. He loved doing this. The federal government would match with money anything the community would provide in equipment and services.

“With the coming of World War II, there was a great spurt in the need for trained mechanics and others to help in the war effort. Courses such as airplane and auto mechanics were added to the program. Thus the school grew and expanded rapidly.”

Emily, a wisp of a graying woman with a girlish chuckle and a steel trap memory, never married. She lives with her widowed sister Polly in the rambling old house their father built on the corner of North Gadsden and Park about 1910 — just down the street from the Charles Knott House, originally occupied by Dr. George Betton, son of Turbot and Eliza Betton. George was probably the territory’s first doctor. When he came to Tallahassee from Newport, where he had been a physician for a few years, he lived and had his practice in the house.

Emily’s sister Polly married the late Wilson Carraway, who helped start the Tallahassee State Bank, now Barnett, and was in the Florida Senate for years, serving once as its president. (Wilson Carraway is remembered as the rare bank president who would call up overdrawn depositors and tell them to bring him some money to cover a check!)

Emily and Polly’s only other sister, Winifred, was married to the late Leonard Wesson, a state road contractor who, like his brother-in-law Lewis Lively, also had a passion for education, and for whom the elementary school is named.

Raney Oven Jr., grandson of Bershe Meginniss Oven, said he wasn’t aware of all the achievements of his forebears and their descendants.

“I’ve always been proud of my roots in Tallahassee. Maybe all of that is why I love Tallahassee so much,” he said.

Said a young cousin, “The legacy left by all of them certainly gives our generation a lot to live up to!”