Home to Two Florida Governors, the Call-Collins House is Now a Public Treasure 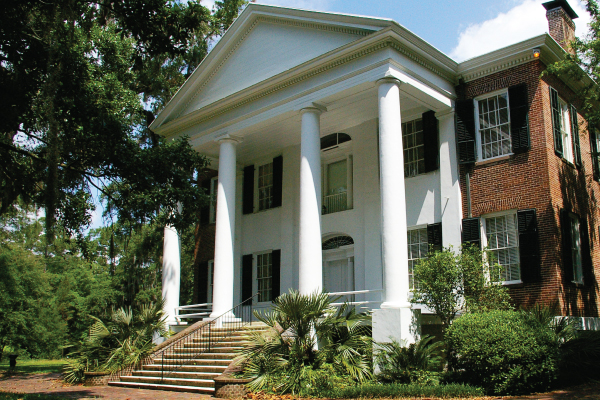 Home to Two Florida Governors, the Call-Collins House is Now a Public Treasure

Florida has many beloved, historical places. The Fountain of Youth in St. Augustine has its own sacred lore, and certainly most old-time Florida Crackers believe that when they die they spend eternity at “Miss Marjorie’s” humble farmhouse down in Cross Creek.

It takes a long cross-state drive to visit many of these legendary places, but probably no other city or town in Florida has as many important landmarks as Tallahassee, places that are not only significant to the town but played epic roles in the state’s history as well.

And perhaps no other local landmark best exemplifies this significance than the Call-Collins House at “The Grove.” The third (and fifth) territorial governor, Richard Keith Call, built the estate in the mid- to late-1820s. Today, the Greek revival-style home he designed and built sits on the same site. It’s next door to the 55-year-old Governor’s Mansion, but practically unseen, surrounded by leafy, tranquil woods.

The Grove is an heirloom of sorts, owned by succeeding generations of Call cousins and daughters, the last being Mary Call Darby Collins, wife of Florida’s popular 33rd governor, LeRoy Collins. Since her passing in 2009 it has belonged to the people of Florida and is in the process of transitioning from private residence to museum.

“We’re looking to see this museum as a hub of Florida history located right in the heart of the state capital, and from here you can start to appreciate our 10,000 years of history in Leon County,” said June Finnegan, education coordinator with the Department of State’s Division of Historical Resources, which now owns the property.

A protégé of Andrew Jackson, Call married Mary Letitia Kirkman at Jackson’s Tennessee home, The Hermitage, in 1824. After a brief stint in Congress, he moved to Florida in 1825. He built his plantation home between 1825 and 1836 on 640 acres near today’s East First Avenue. Back then, the boundaries of the Call property were (roughly) West Tharpe Street to the north and including Lake Ella, Meridian Road to the east, Brevard Street to the south and Dewey Street to the west. Today, though, only 10 acres remain. The rest of the property was sold off over time to pay for keeping the house in the family. The property is bordered now by North Monroe Street to the east, East First Avenue to the south, North Duval Street to the west and West Third Avenue to the north.

Call served as territorial governor twice, from 1836 to 1839 and 1841 to 1844. When Florida became a state in 1845, Call lost a gubernatorial bid and retired from public life to pursue agricultural interests. He gave The Grove to his daughter, Ellen Call Long and moved to another plantation house in 1851. He died on Sept. 14, 1862, and is buried in the family cemetery at The Grove. The house was handed down in the Call family all the way down to Call’s granddaughter, Reinette Long Hunt.

When Hunt died, she left the house to some cousins in Ohio, but Finnegan said they weren’t interested in maintaining the house and decided to sell it. That’s when Mary Call Darby Collins, Call’s great-granddaughter, entered the picture. She had just married LeRoy Collins and, as a descendant of Richard Keith Call, really wanted to live there, Finnegan said.

The Collins family bought the property in 1942 and set up housekeeping, raising a family and venturing into Florida politics. During his two terms as governor, LeRoy Collins became known as a strong civil rights advocate and a forward-thinking man leading a booming state. At one point, he was featured on the cover of Time magazine.

“It was in pretty bad shape when they purchased it, because the women who owned the house didn’t have a lot of money, and yet they did as much as they could,” she said. “One of the things Ellen did was she sold off a lot of the land which is how it went from 640 acres to 10 acres and that’s how she kept the house. Reinette did various things as well (and sold) more property. It was always a priority to keep the house in the family.”

The new owners modernized the old place as best they could; but when Collins was elected governor, they moved next door to the “old” governor’s mansion. However, they moved back to The Grove temporarily when the “new” mansion was being built. After two terms in office, and a busy political life, Gov. Collins returned to Tallahassee in 1970 and the family moved back to The Grove.

Realizing the significance of the property, the Collins family sold the house to the Department of State in 1985, Finnegan said.

“When they did that, a statute was created that said the house has to be a museum honoring Florida’s governors, and by statute we’re obligated to fulfill that,” she said.

“Right now, we are in the process of restoring the house and the property and potentially acquiring buildings to expand the amount of land we have, and developing the interpretive elements and aspects of the house.”

The law also stipulated that as long as they were alive, Gov. and Mrs. Collins were allowed to live there. Gov. Collins died in 1991; Mrs. Collins died in 2009 at the age of 98. True to the wishes of the Collins family, the estate changed hands and is now a ward of the Florida Department of State’s Division of Historical Resources.

The restoration has proved challenging in a couple of ways. During early surveys, more structural damage was found than was expected, Finnegan said, and it’s uncertain how much funding the project will get. But perhaps the biggest problem is the ever-present threat posed by water intrusion.

“Controlling the moisture is a big issue, and that’s true for most historic homes,” Finnegan said.

Call built the home out of brick and wood, and meant for it to last for generations. But after 175 years, some parts need a little TLC.

“Basically, the house was in pretty good shape, and the brick construction is the same as it was when built by slaves in Call’s time,” she said. “Those bricks were handmade on this property, and the slaves laid the bricks, but some of the bricks had some cracks in them so (architects and reservationists) had to go in and remove the plaster and fill in spaces where the bricks had cracked. It’s mostly been repair-type work.”

Outside the family, and the privileged few who have had occasion to set foot there, The Grove is largely unknown by most Tallahassee residents because it’s never been open to the public.

Eventually the house will be accessible to the public, but it’s going to be a bit different from the nearby Goodwood plantation house because the furnishings aren’t available to turn it into a similar period-correct set piece, Finnegan said.

“It will have workshop space, museum exhibits, but it won’t be like Goodwood. We’d like it to be, but we don’t have the furnishings,” she said. “We have a lot of the family papers, and the exhibits will be about the family history.”

Planners hope the repairs and renovations can be completed so it can open next summer, but that’s not a sure thing.

When the museum is open, visitors will come to understand the lives of two men who lived in very different times, but are connected by this one place.

“When Call moved in he was a plantation owner and he owned slaves. When Collins moved in he was governor but he was a proponent of civil rights, so it demonstrates a very important transition in our culture and heritage,” Finnegan said. “Both of these men had tremendous amounts of courage and what they did influences many other people, and it all took place here.

“Historically, it’s significant; architecturally, it’s significant. It’s not just a building. It seems to have this ‘heart’ in it,” she said. “We want to instill a sense of preservation, and we want people to look at their historical buildings (throughout Tallahassee) and do what they can to preserve them. Mary Call Collins was designated a ‘lifelong preservationist’ because she helped so many other homes.”