The Best Way to Witness the Neighborhood’s Wildlife

With Patience and Perseverance, It’s Possible to Watch the Neighborhood’s Wildlife

In the darkness of night I take my carefully planned-out position and wait. Suddenly, she appears, dividing evening and dawn. It is as if a curtain between us has been raised … darkness on one side, dawn pushing through on the other. She stands motionless, eyes and ears alert, looking beyond me at something I cannot see. She decides it is safe. Though my cramped, bent-over stance is painful, movement is my greatest enemy. If I let the slightest motion escape, she will disappear into the struggling light of early morn … the dance over … leaving me without her mystical image.

She must not know I’m here, if I am to be with her beyond a fleeting glimpse. The sight of her captivates me. She fears me, as do other animals that stealthily move through our woods, across our yards, lakes and roads. Such is her mostly invisible life in suburbia. Though we fail to see her, she sees us. And so, she has developed a life in our neighborhoods that allows her to flourish, while she remains wary of us.

Though the red fox roams much of the eastern U.S., the gray is dominant in areas they share. The gray fox population also flourishes from southern Canada to northern South America. Considered to be among the most primitive of the dog-like mammals but having curved claws, the fox can climb trees to escape predators and to eat fruit and berries. Fifteen pounds is a typical weight.

Dens are made in hollow trees (30 feet above the ground), in stumps or ground burrows. The female is monogamous and usually births her kits once a year in early spring. As autumn paints the cooling ground with her favorite colors, the young foxes reach sexual maturity and the family disperses. But the music that drives the “Dance of Suburbia” never ends.

Our most-noticed neighborhood dwellers fly about the trees in our yards or hop along the ground just long enough to grab insects, worms or morsels we cast aside. Some prefer wading for food, their beaks pushing through the mud of ponds and lakes.

But the rarely seen winged suburbanite, the yellow-bellied Great Crested Flycatcher, holds a most precious place in my heart because, without asking and with great determination, a pair commandeered my newly painted yellow mailbox. 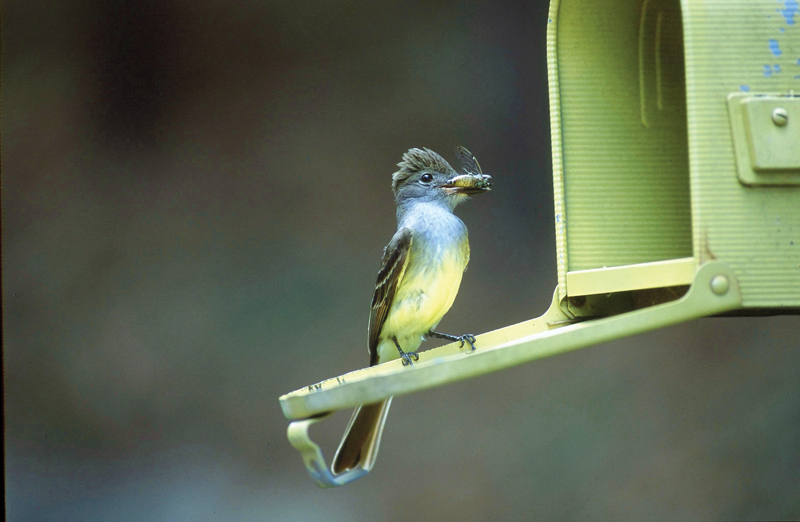 They don’t show up very often, but when a pair of Great Crested Flycatchers decided to visit, they made themselves at home in a mailbox, built a nest and raised some babies.

Colored in warm yellows, cool bluish gray hues and sporting a spiffy hair style that only some of us can pull off, they are extremely shy.

Upon discovering the beginnings of a nest in my mailbox, I promptly removed it. But each new day presented me new building material and, eventually, compassion and love for the unseen birds surfaced in my cold, hard heart. I now considered them my blessing and surrendered to the unseen couple determined to build their new home. It seemed the oddest place … just three feet above the sizzling pavement. Surely, that sun-baked tin can would be far too hot for them and their babies. Yet, they fought for it, day after day.

Why didn’t they build their nest in the cool of a tree? Why had they endured my unwillingness to share and the big white truck that once a day cast a sudden darkness on their “bird cave” while a giant hand shoved strange paper in their nest?

I never shut the door. That open door is what allowed all this to happen. Daily, they continued to repair the damage done by the giant hand.

Eventually, I met the mail carrier, asked for help, explained the need and offered a solution. A second mailbox (of sorts) would suffice. That very day ended with a five-gallon plastic bucket, laid on its side, nailed to the top of a new post beside the regulation mailbox. With an opening so large and no lid, the carrier could literally throw mail into the bucket without stopping. It was even rigged so he would know if there was outgoing mail. All this for a couple of unseen squatters. I laughed at myself. But now they could custom build a nest to incubate those “cookies and cream” colored eggs.

For weeks they had to keep the eggs just the right temperature to hatch, fend off snakes and other birds while catching enough insects to feed both parents. A smallish bird, they carry a large, heavy beak and are classified members of the tyrant group of birds. The eggs hatched within weeks. Upon seeing the parents entering the mailbox with insects, then flying out only to return with more, I ran to the house. Grabbing the camera, tripod and a chair

I returned to the mailbox, placed the chair in the street, set up the camera 10 feet away, then sat still and silent. Soon a flycatcher landed on a limb 30 feet away and wrestled mightily with my presence. Ultimately surrendering to the drive to feed his babies, he flew to the mailbox door. He perched a short while, then entered his mansion (painted his favorite color).

The Flycatcher doesn’t gather food on the ground but perches on a tree limb to look for flying insects. Upon seeing one they fly off the limb, catch the insect with their beak and continue to the nest if they are feeding babies or a spouse. Because of their hunting technique, babies must be ready to fly when they leave the nest about 15 days after hatching. They do not fall to the ground but flutter immediately from tree limb to tree limb as the parents feed them, talk to them and encourage the strengthening of their wings and honing of their hunting skills.

They soon disappear. Being leery of people, 13 years would pass before I saw another pair. To find them, look among the lower limbs at the edge of open woods … and in bright yellow mailboxes.