The Best Advice for DIY Computer Repair is … Don’t

Step Away From the Laptop 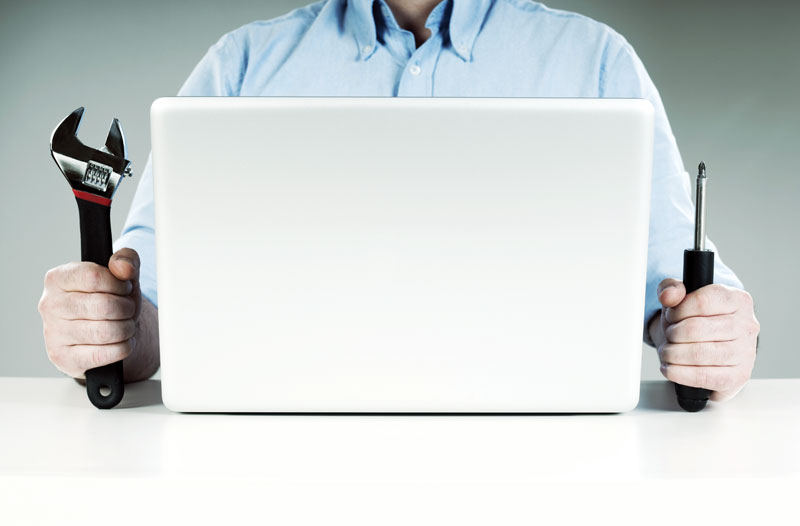 Back before there were laptops and tablets, there was the desktop computer. It was big, bulky and built like a car. If there was a problem, a technically minded user could open one up with relative ease to perform maintenance or replace a component.

Today, if something goes wrong with your laptop or iPad, you take a big chance by trying to repair it yourself if you don’t know what you’re doing. Skill levels vary, but if you aren’t confident in your capabilities, you could do more harm than good.

Matt Ham has seen it happen. The president and CEO of Computer Repair Doctor in Tallahassee is often asked to repair devices whose troubles were compounded when an inexperienced user tried a do-it-yourself approach. For example, some customers have brought in iPads with screens they cracked while trying to do a repair.

“The thing about that is, it’s more costly for them, because we (will) replace more components than we had to,” he said.

Technology may be wonderful, but a hundred things can go wrong with modern computer systems. That’s not good, considering many of us put our entire lives on these machines. Precious family photos, music, videos and vital documents all can vanish in the blink of an eye because of hardware failures, overwriting errors, viruses, malware and other malfunctions.

Users who aren’t as technically savvy or proficient with the engineering as the geniuses that designed and programmed the machine are at a distinct disadvantage when the thing stops working. So, what do you do when the dreaded “blue screen of death” pops up or some virus hijacks your system? What do you do if you can’t access all those important family photos and documents?

You can try to fix it yourself, if you think you have what it takes, Ham said. The problem is the issue of scale. It might be easier to get into a desktop than a laptop, but a tablet is harder to open up because the way its case and interior components are designed.

“The devices have gotten more difficult to repair as they have evolved over time, but once you are inside a laptop — if you have the expertise — it can be just as straightforward (as a desktop), just on a smaller scale,” Ham said. “It takes a little more finesse to replace or fix things without causing other issues. The newer technology is slimmer, more lightweight and smaller, and that means certain components have been consolidated.”

If you want to go it alone, though, be sure you know what to expect going into such a project.

“Not everyone is going to know when they’re over their head,” he said. “The biggest thing you should know is your skill level. A lot of repair guides have levels of difficulty, and you need to know what you can handle. There are tutorials that can help you with some devices, but you would need to (be able to) diagnose it correctly. You’d also need the tools to do the job and the knowledge and expertise to get it done, and guides can be tricky and may not have the right tips to pull off the repair successfully. When in doubt, call in the professionals.”

One thing that trips up the ordinary user is hardware. Perhaps the power jack is broken, or there’s a cracked screen on a laptop, or spilled coffee has contaminated the wiring.

“Hardware is almost always beyond the reach of individuals,” Ham said. In some cases, the repair requires a special tool.

“We’ve brought a lot of machines back from the dead using an ultrasonic cleaner. That’s a perfect example of a tool that no individual is going to have. It’s an expensive piece of equipment that’s proven useful to us,” Ham said.

One of the best ways to find information on anything, including computer repair, is the Internet, Ham said. And in his opinion, Google is the way to go, but like anything else it has its limitations.

“Google won’t help you diagnose the problem, but once you know what the problem is you can find a guide online. Sometimes, there’s nothing; sometimes, there are step-by-step YouTube videos,” he said.

Better Back it Up

Even if you take great care of it, your computer is still nothing more than a mechanical device that is prone to failure. Fixing a problem after the fact is one thing, but if you rely on your computer to store priceless documents or photos, the best thing to do is back it up regularly. That’s a point that can’t be emphasized enough.

“Backing up data is very important,” Ham said, noting that it’s very expensive (not to mention extremely difficult) to recover data that hasn’t been backed up. “I once worked with a data recovery tech, and jobs would go from $500 to $5,000 for serious data recovery. If it is a tier 1 job, it’s $100 to $500. That’s the stuff we handle in-house here. (Cases like) software recovery or, perhaps, you reformatted the drive and lost data that way. But if the hard drive crashes and the heads crash and need to be opened, you need a clean room with special equipment and someone who has been in this game for a while. Data recovery is nothing you want to need.”

Fortunately there are plenty of good options for data backup. You can put it in “cloud” storage (off-site virtual storage hosted by third parties), or just back it up on an external hard drive. The key thing is to have at least two “points of failure” instead of just one, Ham said. If you use an external hard drive, though, check it regularly to make sure it’s working properly. You don’t want to suddenly need to retrieve something you thought was backed up, only to discover it wasn’t.

“Data backup is just like insurance,” Ham said. “I worked in North Carolina with some database centers and they had systems in place that had double redundancy, and every machine had two of everything, plus generators outside to protect against glitches in power. And instead of fire sprinklers they used the Halon system that sprays foam so it wouldn’t disrupt the servers.”

The average user doesn’t have to go to such extremes. Just make sure the backup is physically separated from the original, because you don’t want an accident to take out both the original and the backup. Another thing to be wary of is flash memory, such as USB drives and memory cards.

“When flash memory fails, it’s a lot harder to recover data than when a mechanical hard drive fails,” he said.