Tensions Rose As The Waiting Went On

Y2K? As the year began, all sorts of dire predictions filled the air, but we seemed to dodge the millennium bullet just fine. In fact, we almost made it through the entire year. It was that pesky presidential election Nov. 7 that gave us pause, putting Tallahassee on center stage around the world. 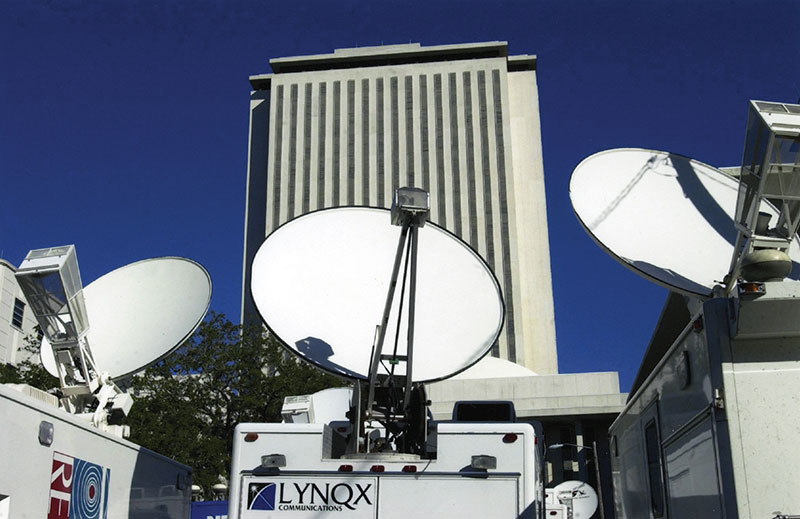 For several weeks following the general election, all eyes were on Florida’s capital city; the world watched and waited through the counts and the recounts, the charges and counter-charges, the court decisions and the certification. Media from around the country and the world flocked to Tallahassee to cover the story. Some of the faces were familiar, some not so familiar, and still others would be totally unfamiliar.

Sarah Grossman represents the British Broadcasting Corporation in the United States. Headquartered in Los Angeles, “I cover America,” she says with a personable smile, “at least that part that’s east of the Mississippi.” She finds the disputed election a primer in democracy that is fascinating to watch.

“It will all work out,” she says, voicing her confidence in the process. Her British viewers are riveted by the process of choosing the American president.

Entering the Capitol on this Wednesday evening, more than a week after the election, one encounters a phalanx of reporters and photographers hovering near the office of Secretary of State Katherine Harris. Earlier in the day they had gathered across the street at the Leon County Courthouse awaiting a ruling from Circuit Court Judge Terry Lewis, and now they wait for some sort of response from Harris. The word is that there is no word, although an announcement might be forthcoming sometime around 5 or 5:30. Although it is now only 4 p.m., the journalists know that this is where the news will originate, and they are reluctant to leave. Even though they are exhausted, they will not surrender any advantage they might have gained in covering this momentous story.

Photographer Stan Honda works for Agence France-Presse. Based in New York, he has been in Tallahassee for nearly a week. The rigors of being constantly on call are taking their toll.

“I don’t know how this will all work out,” Honda notes, “but I know that it will.” Like others, he thinks that Vice President Al Gore more than likely will prevail, but no one wants to predict the outcome with certainty.

Elsewhere in the rotunda, Capitol police keep a watchful eye. A bomb-sniffing black Labrador retriever named Sadie sniffs the ground. Her handler grins at a reporter’s inquiry. Sadie, she says, is only on the trail of food that someone has dropped; there is no bomb. Other officers report that other than the unusually large crowd of reporters, everything has been business as usual on this very unusual day.

A flurry of activity and jockeying for position ensues as someone leaves Harris’ office. When it becomes apparent that he has no news to offer and no idea when news might be available, the crowd relaxes once again. Much of the conversation turns to the issue of lodging. Although many of them must surrender their hotel rooms to football fans for the upcoming Florida State-University of Florida game, nobody seems to be too upset about it. After all, they say, this is a football town.

As the afternoon slides into early evening, the focus moves outside to the Capitol complex plaza. To the casual observer, the atmosphere seems almost surreal. Television reporters and camera crews have staked out their positions; klieg lights focus on the reporters’ faces as they shift into high gear and deliver the first salvo in the evening news.

Return to downtown Tallahassee a few days later, and the tension has not eased. In fact, as the waiting goes on, it has only escalated. A driveway behind the Capitol complex is jammed with satellite uplink trucks from all over the country. The closest geographically comes from New Orleans; another represents a television station from Boston.

Although there is a flurry of activity here, the focus today has shifted to the courthouse across the street. Another ruling is expected, and it is sure to generate the news of the day. Indeed, when Court Administrator Terry Cass announces a decision that seems to favor the Republican slate of Texas Gov. George W. Bush and Dick Cheney, it’s obviously not what the people were expecting.

As the crowd disperses, some of the journalists do, too, and some of them have time to talk. Mike Boettcher of Cable News Network of Atlanta readily acknowledges the importance of this story.

“I normally cover international news, so this is a little difficult for me to assess,” Boettcher says, “but I can tell you that it is one of the top three stories I’ve covered. The other two are the fall of the Berlin Wall and the (Persian) Gulf War.”

Although the election is critical, Boettcher doesn’t believe that the contest puts the country at risk. The United States is strong, he says, and will be even stronger once Election 2000 is resolved.

(Recognizing the importance of the story, Boettcher says, CNN sent a crew of some 40 reporters and technicians to Tallahassee. The lodging problems presented by the football game ceased to be a problem when CNN struck a deal with Tallahassee Community College. The network gave TCC $8,000 for the CNN Presidential Scholarship in return for lodging at the Pat Thomas Law Enforcement Academy in Midway. The deal came about when TCC President T.K. Wetherell added the academy’s dorm space to the master list of available lodging compiled by the Tallahassee Area Convention and Visitor’s Bureau.)

John Hockenberry of “Dateline NBC” is on the concourse outside the Capitol complex taping an introduction for a Sunday segment of the popular newsmagazine. His familiar voice, clouded by the remnants of a cold, shares some of the atmosphere with “Dateline” viewers. When he’s finished, he echoes Boettcher’s sentiment.

“I don’t know how this is all going to play out,” Hockenberry says, “but it will. Our government will survive, and we will have a president,” he adds.

As one of the newsmakers, Judge Terry Lewis shares his unique perspective on the story behind the story.

“A couple of reporters called the house, which was sort of surprising since I have an unlisted phone number,” Lewis says. “The L.A. Times and ‘Inside Edition’ somehow got my number. Someone even managed to track down my brother’s son, my nephew who lives in Starke. They were persistent, but nobody was obnoxious.”

Lewis muses on the history-making aspects of the election and its aftermath.

“It’s hard to say,” he notes. “Of course, this has never happened before, but then there’s part of me that wants to say, ‘What’s all the hoopla?’ I had a non-jury trial going at the same time, and someone asked me if I was going to cancel it.

“Of course I didn’t cancel it. That trial was just as important to the people involved as the election was.”

Our Two Cents’ Worth: A Tallahassee Magazine Editorial

When our forefathers established the electoral process, they had no way of predicting worldwide instantaneous news gathering or the crystal-ball process of polling, and there is no way they could have anticipated the results of Election 2000. We have listened to many reports since the election and have never heard the media respond to charges that they had a negative effect on its outcome.

In this current electoral debacle, they were in such a hurry to be the first to predict the winner from their high-priced pollsters that they called Florida before polls in Central Time Zone counties closed. This rush to judgment may have affected certain individuals’ willingness to vote, thereby potentially affecting the close outcome of the Florida election.

Then as another pie hit their face later they called it a Bush election, only to rescind that prediction at 3 a.m. The average person may ask, “Why?” Let’s not fool ourselves. Their goal was not to inform the people. Instead, they sought those precious rating points, which translate into ad dollars for the publicly owned corporations that run the news business. We believe it is appalling that the media do not hold themselves to the same standards as they hold everyone else. If they did, this theory would be debated with the same fervor that every other angle has been. When criticized, the media hide behind the First Amendment as justification for their work.

On Nov. 30, the Tallahassee Democrat stated that the networks would “promise” not to tell next time. Isn’t that nice? It’s too bad that wisdom did not kick in before America, the world and the two fine candidates for president had to suffer the consequences of this stressful time.