Twenty years ago, Lou and Betsy Kellenberger decided it was time for a change. After 26 years in Dothan, Ala., they wanted to live in a university town where they could have access to arts, culture and sports.

“Our children were grown,” Lou says, “and we had the freedom to do
these things.”

Tallahassee was a perfect fit, so they packed their bags and made the nearly 100-mile trek, bringing with them a love of photography and public lands and a sincere desire to serve the community through volunteer work and civic involvement.

Lou also is a board member of the Florida State University Theatre Patrons Association and is a Rotarian. He is active in FSU’s Quarterback Club. Both are involved in the Friends of Wakulla Springs and are strong supporters of the Seminole baseball team.

“We enjoy being part of these organizations,” Lou says. “It’s a small way of giving back.” 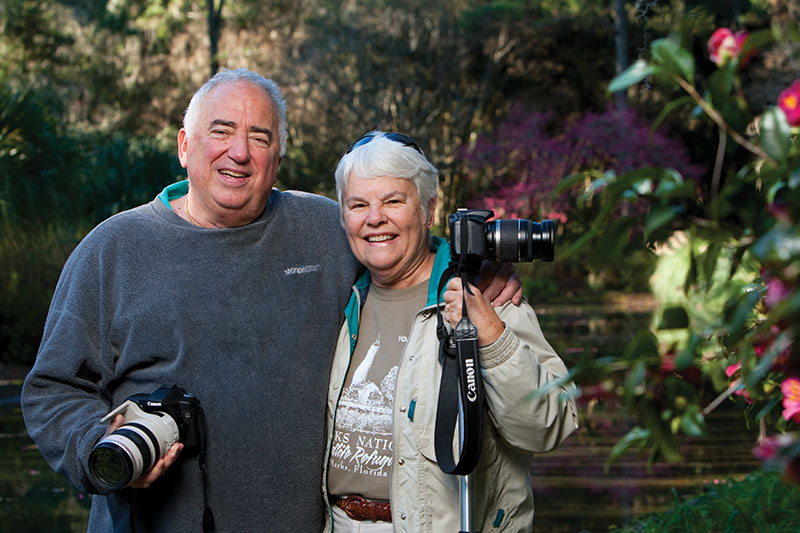 Lou Kellenberger, then an 18-year-old strapping lifeguard, met 16-year-old Betsy Johnson at a swimming pool in their native West Virginia. They attended many AAA baseball games while dating, and the sport became the first of their many shared passions.

“She got me young and grew me up like she liked me,” Lou jokes.

They moved to Dothan in 1962, where they lived for 26 years and reared four children – Cathy, Peter, David and Brian. The Kellenbergers have seven grandchildren and two great-grandchildren. Lou, 71, was a broker and manager for A.G. Edwards. Betsy, 68, was a homemaker and volunteer with Dothan Landmarks, the Episcopal Church and the Dothan Service League.

When they moved to Florida’s capital, Lou went to work for Shearson Lehman and Betsy went back to school. She graduated from Tallahassee Community College, then got her degree in English and creative writing from FSU. She is now retired after working part time for the state Bureau of Library Development.

They also jumped into community life.

“They are active in so many areas,” says Beth Weidner, the manager of Maclay Gardens, who has known the Kellenbergers since they moved here. “He really wants to be in with what our needs are and meet those needs.”

Lou was on the original committee that formed the Friends organization, is a past president of the group, and for three years was in charge of the Pops In the Garden concert. Betsy is the current treasurer and is coordinator of the Tour of Gardens for 2008 and 2009.

“Without her helping out in every little way, a lot of things wouldn’t happen,” Weidner says, “from the newsletter to planning member events.”

The couple, through Friends of Maclay, also has been instrumental in getting a golf cart to ferry elderly visitors and people with disabilities around the park. But it’s the organization’s latest venture that Lou is most proud of.

“We are very close to getting an overlook on Lake Overstreet,” he says. “It’s going to happen soon.”

When it’s built, the overlook will be the ideal place for visitors to view and photograph the ducks, birds and alligators that make their home at the lake. And you can be sure the Kellenbergers will be among the first to snap a picture.

A Passion for Photography

Lou was the first to get the camera bug, but in 2005 Betsy got tired of just watching.

“I always had a passion for photography,” she says, “and I used to follow him around. Then a light bulb went off, and I said ‘Honey, I should be doing this, too.’”

“Betsy is a very accomplished artist,” he says.

The Kellenbergers say they are not competitive.

“We help each other,” Lou says. “We can be at the same event and see things in different ways. I ask her a lot of things because she has an artistic background for light and color.”

One of Betsy’s photos was chosen for a color poster marking the 75th anniversary of the St. Marks Wildlife Refuge She also won Best of Show at the St. Augustine Alligator Farm photo contest. Lou, meanwhile, took home the People’s Choice award at Florida’s Birding & FotoFest. His photo of the St. Marks Lighthouse with the setting sun behind it was accepted by the Council of Culture and Arts and was on exhibit at Photo Fest 2008 at Tallahassee Regional Airport.

On any given weekend, you’re likely to find the two tramping through the outdoors in search of just the right photo of a bird, butterfly or blossom.

“We often get up in the morning to catch the sunrise at St. Marks,” Lou says. “We stay from mid- to late morning, then go to Wakulla Springs and take the boat tour, then go back to St. Marks for the sunset.”

Refuge ranger Robin Will appreciates the Kellenbergers’ enthusiasm and their commitment to the refuge.

“Lou loves nothing more than being out front in the Visitors Center engaging with visitors to the refuge,” she says. “He completely disarms them.”

The Kellenbergers believe in sharing their knowledge. Both are involved with Friends of Wakulla Springs and have taught digital photography at the Wakulla Wildlife Festival. They also are founding members of the St. Marks Photo Club, which encourages photographers with varying skills to get out and enjoy nature.

“Photography helps us get outside and meet other people,” Lou says. “When we’re out taking photos, people often come up to us and ask for tips.” And they don’t mind if people reciprocate. “If you don’t think you can learn from other people, you’re not as smart as you think you are,” Lou says.

When the Kellenbergers lived in Alabama, they were diehard Auburn fans – two of their sons attended the school.

“When we came over here, we went on a trip with the FSU President’s Club, which was going to Auburn,” Lou says. “We had seats with all these FSU people, and every time Auburn would score, Betsy would jump up.

“She told me, ‘I can’t believe we’re here with all these FSU fans.’”

Times have changed. Betsy is now a rabid Seminole fan, especially when it comes to Mike Martin’s team.

“I love FSU baseball,” she says.

While Lou is a baseball fan, too, he also is a big FSU football booster, and once served as program director of the Quarterback Club, where his business sense paid off.

Eisenman, who also serves with Lou on the board of the FSU Theatre Patrons, admires the work ethic of his fellow broker.

“Lou rolls up his sleeves and goes to work and is also good about encouraging others to do the same,” he says. “Betsy also rolls up her sleeves with her husband. They work well together as a team.”

What do the Kellenbergers say to others who want to get involved in community activities but aren’t sure how to go about it?

“Decide what you like, what you have a passion for, and volunteer,” Lou says. “Don’t spread yourself too thin and, every so often, rotate and let some fresh ideas in.”