Author recounts lessons offered by a past pandemic

Sixteen years ago, John Barry published a work of history that had taken him seven years to write. Then, in March, it showed up as the No. 1 book on The New York Times paperback nonfiction best sellers list, and Barry found himself on talk shows and news panels. Barry’s book, The Great Influenza: The Epic Story of the Deadliest Plague in History, explores in exhaustive fashion the influenza pandemic of 1918, efforts to identify the pathogen and understand its lethality, and the advances in medicine and scientific inquiry that the scourge precipitated. The book is remarkable given the parallels it presents between what came to be known as the Spanish flu and responses to it and the COVID-19 crisis of 102 years later.

The best available science holds that the 1918 virus originated not in Europe, but in rural Haskell County, Kansas, where hogs far outnumbered people.

The 1918 outbreak coincided with the final months of World War I. Massive troop movements were still taking place. Because, for a time, severe influenza cases were detected only in Haskell County, people believed that it might be confined to that tiny community, much as officials including President Trump hoped that COVID-19 might be limited to passengers aboard a cruise ship off the California coast and not infect the mainland.

Only a few Army recruits, Barry points out, moved between Haskell County and Camp Funston on the Kansas River, “but a river of soldiers moved between Funston, other Army bases and France.”

In a matter of weeks, 1,100 troops at Funston had become ill enough to require hospitalization. The fire had started. Ultimately, a hundred million people were killed worldwide, 675,000 in the United States. 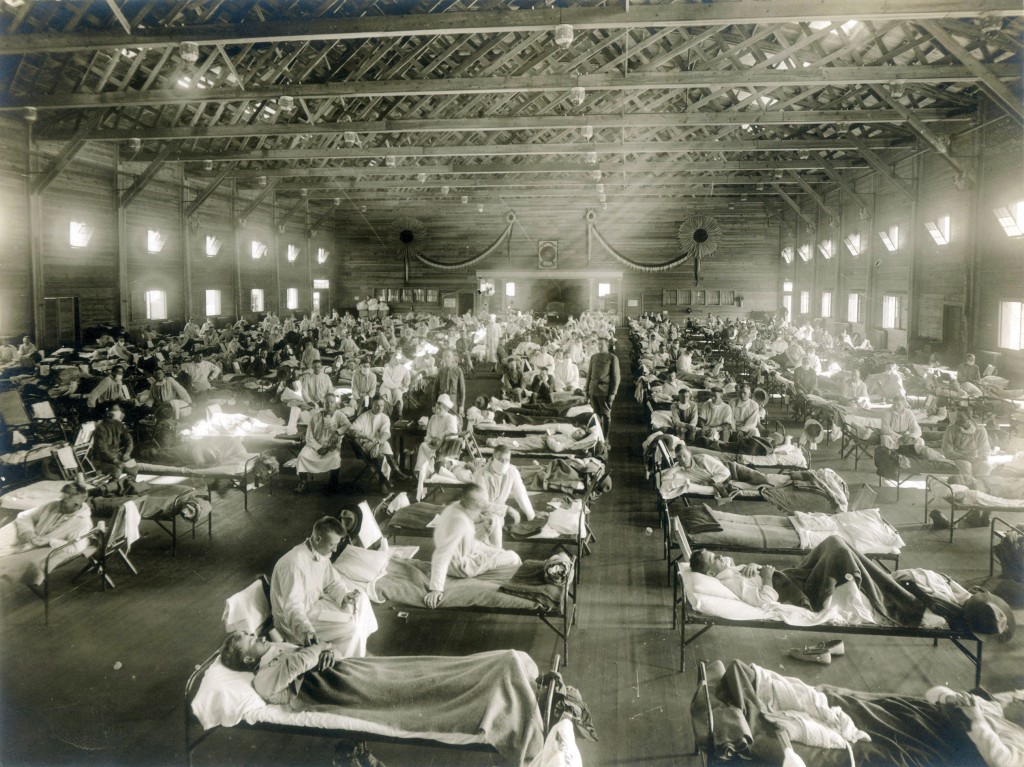 A hog in Kansas may have been a Wuhan bat. Veterinarians noted cases of influenza in pigs in 1918. But it is not clear if pigs transmitted the virus to humans or if the livestock got it from people. Too, Barry notes, “an entirely new virus can emerge that can infect man.”

As the war neared its end, President Woodrow Wilson remained exclusively focused on achieving total victory and exacting complete capitulation from the Germans. He would devote little to no resources to combating the virus.

“Wilson took no public note of the disease, and the thrust of the government was not diverted,” Barry writes. Wilson was as distracted by war as another flu-footing president would be by impeachment proceedings. Wilson’s personal physician implored the Army chief of staff, Gen. Peyton March, to suspend the movement of troops across the Atlantic. March met with Wilson and contended that any such relaxation might result in resurgent German morale. And still the troopships sailed.

Wilson was even less caring about civilians. Barry writes:

He continued to say nothing publicly. There is no indication that he ever said anything privately, that he so much as inquired of anyone in the civilian arm of the government as to its efforts to fight the disease.

Governors and mayors, like so many Andrew Cuomos, beseeched Washington for assistance. Appropriations were meager, and late. Into the breach, noted Barry, stepped “social agencies run by women, strong women of intelligence and energy and born to a certain rank, but excluded from all pursuits beside charity.”

So great was the pressure to find cause and cure that scientists who ordinarily adhered strictly to the most rigorous protocols resorted to shortcuts in efforts to save time. The ordinarily meticulous William Park, chief of the lab at the New York City Health Department, for example, “had no leisure for justification. If he was to have any impact on the course of the epidemic, he would have to guess — and guess right.”

Both Barry (Penguin Group, 2004) and Michael Osterholm and Mark Olshaker in Deadliest Enemy: Our War Against Killer Germs (Little, Brown 2017), conceded the inevitability of future pandemics.

“Every expert on influenza agrees that the ability of the influenza virus to reassort genes means that another pandemic not only can happen. It almost certainly will happen,” writes Barry.

“In any given year, or even in any given decade, the probability of a major influenza pandemic is low,” note Osterholm and Olshaker. “As a possibility for some unknown point in the future, it is virtually a dead certainty.”

Given that certainty, Osterholm and Olshaker write in a chapter titled Taking Influenza Off the Table, “We … want a vaccine to protect us for a number of years after a single dose, rather than having to get shots each year. I believe such a vaccine is within our reach.”

They call for the establishment of an international organization to urgently address all aspects of antimicrobial resistance.

Work to be done.

For Barry, the lessons offered by the events of 1918 include this one: “Those in authority must retain the public’s trust. The way to do that is to distort nothing, to put the best face on nothing, to try to manipulate no one. Lincoln said that first, and best.”

Much to be heeded.