It's not just language broadening her worldview

The first things they all want to learn are the cuss words,” Althea Valle laughed in describing her students.

Well, doesn’t everybody? But for young non-speakers of English, knowledge of a few “naughties” can mean acceptance and perhaps the beginning of belonging in a new culture and its different ways of communicating.

Valle should know. For nearly 20 years, the 2020 Leon County Schools Teacher of the Year has taught English to speakers of other languages. An instructor at Godby High School for 15 years, she previously worked at the elementary school level in Gadsden County before graduating to the secondary school arena and becoming Godby’s English for Students of Other Languages (ESOL) Coordinator.

The diminutive Valle has lived an exciting life and seen much of the world.

She was born in Montego Bay, Jamaica, and majored in economics at the University of the West Indies, graduating with honors. Her degree made her attractive to the Jamaican foreign service’s trade mission and, fresh out of college, she became “second secretary” at the Jamaican embassy in Belgium. There, Valle collaborated with a variety of countries’ representatives and became fluent in French.

After four years, she decided to join her mother, then living in New York City, and eyeing plans to change professions, made plans to earn a master’s degree. But on a trip back to Jamaica, Valle met her husband-to-be, an American on holiday, and those plans shifted dramatically.

The couple married, set up a home in the United States, and began a family that would grow to include twin girls, now 32, and two sons, 28 and 25. Valle resumed pursuit of a master’s degree in English. She was determined to become a teacher.

“When I had worked in Belgium, learning French had piqued my interest in languages,” she said. “Even now, I don’t consider myself a linguist, although I’ve become a poor Spanish speaker along the way.” 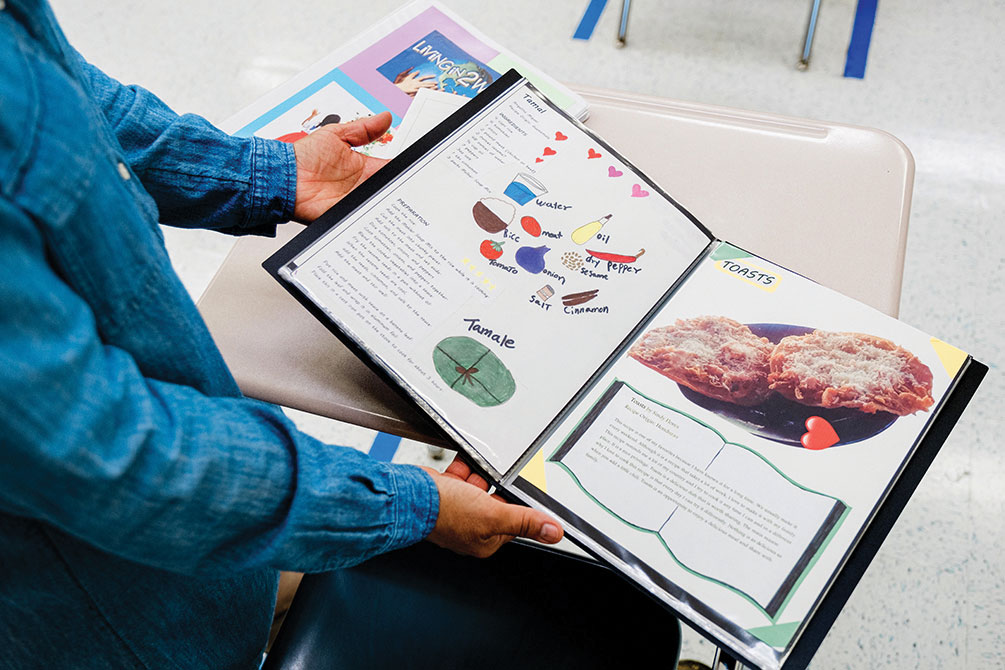 ↑ Althea Valle reviews student projects at her classroom at Godby High School. Her interest in languages was piqued when she worked at the Jamaican embassy in Belgium. Photo by Saige Roberts

Cherith Sivyer became a great inspiration and mentor to Valle, helping her to see “what young people not born here can contribute to our society and how we, in turn, can join together to build bridges between cultures.”

“These children work so hard to fit in,” Valle said. “And some come without literacy skills — they can’t read in their own language.

“We use everything. There may be lots of gesturing and body language cues. We draw, we write words out. There are picture cards. And FSU provides us with a number of online modalities.”

Valle teaches classes of 12 to 15 students comprising speakers of Farsi, Spanish, a number of Asian languages and other languages.

“Communicating is always a moving target,” she said, but one she happily pursues.

“They must write more in a social context, using idioms and phrases used by their peers,” Valle said. “They also, I think, are happier. Now, they can easily communicate with those back home, and in that atmosphere, take the chances that come with expressing yourself when you’re not sure if you’re doing it right.”

Valle tries to keep track of the progress her students make through life.

“I stay in touch with some of my very first students,” she said. “One of them I had in middle school is now a physician. Another one became a pharmacist. Not everyone takes up such a profession, but each one who succeeds in this land of English speakers brings me hope.”