Turkey is not just for Thanksgiving anymore

Turkey is not just for Thanksgiving anymore. Join us in breaking down our favorite holiday bird. 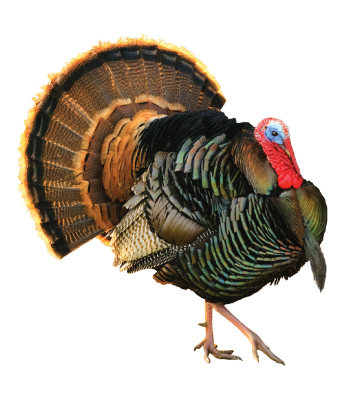 While it’s the centerpiece of many holiday celebrations, turkey is not just for Thanksgiving anymore. The consumption of turkeys has doubled over the past 25 years, winning their way into our shopping carts — and our stomachs — as people increasingly consume it as a healthy food choice year round. Here are some facts and stats showing what makes this bird different than the rest.

Feathers
Mature turkeys have around 3,500 feathers. Males spread their tail feathers like a peacock to attract females during mating season.

Wings
They have wings, but  domestic turkeys are unable to fly. Wild turkeys fly for short distances up to 55 miles per hour.

Legs
Wild turkeys can run
up to 20 miles per hour. Including the bone, drumsticks can weigh up to a pound and a half. An adult gobbler (what a male is called) has sharp spurs on his legs for fighting.

Face
An adult of both genders has a snood, an appendage on its face that dangles. Studies have shown the length of a male’s snood is indicative of its health — and  females prefer a mate with a longer snood.

Eyes
Turkeys can see in color and have a 270-degree field of vision, which makes it hard to sneak up on them. Turkey has been linked to improving human eyesight because it’s high in zinc.

Head
The bare skin on a turkey’s head and neck can change color to red, white or blue when it is distressed.

Fun Turkey Facts
»  Ever wonder why you feel sleepy after gorging yourself on Thanksgiving? Rumor has it that tryptophan — found in turkey — causes post-prandial lethargy. However, recent studies have shown turkey is not the culprit for fatigue. Rather, it’s eating a high-carbohydrate meal. In other words, blame all of the bread, potatoes and stuffing in your stomach.

»  Benjamin Franklin nominated the turkey for the United States’ official bird. However, the bald eagle was chosen over the turkey as a symbol of strength, freedom and courage.

»  Each year, the National Turkey Federation (NTF) presents the President of the United States with a live turkey and two fully dressed turkeys. After the ceremony, the live turkey goes back home to live out the remainder of his life.