Candies that make us nostalgic

Do you have a favorite candy? Something that sends you back in time to your childhood? I’m nostalgic by nature, so I’ll buy anything if I have fond memories of eating it as a child. Like Junior Mints. I don’t even like them that much — the mint-to-chocolate ratio seems off, somehow — and I always, without fail, open the box on the wrong end. But because I remember eating them while at the movies, I always buy them at the movies. Even if they’re $5 a box. (Get ’em frozen — they’re worth $5 a box, then.)

Junior Mints, which were first made in the 1940s and were named after a Broadway play called
“Junior Miss,” are just one brand of candy that has been loved by generations for years. Almond Joy, too, had its origin in the ’40s; Milky Way bars were created in 1923, and Pixy Stix were born in the ’50s! Some of the best, most enduring candies were made in the first half of the 20th century — especially during the Great Depression and World Wars years. That says a lot about how people cope with stress, I think. 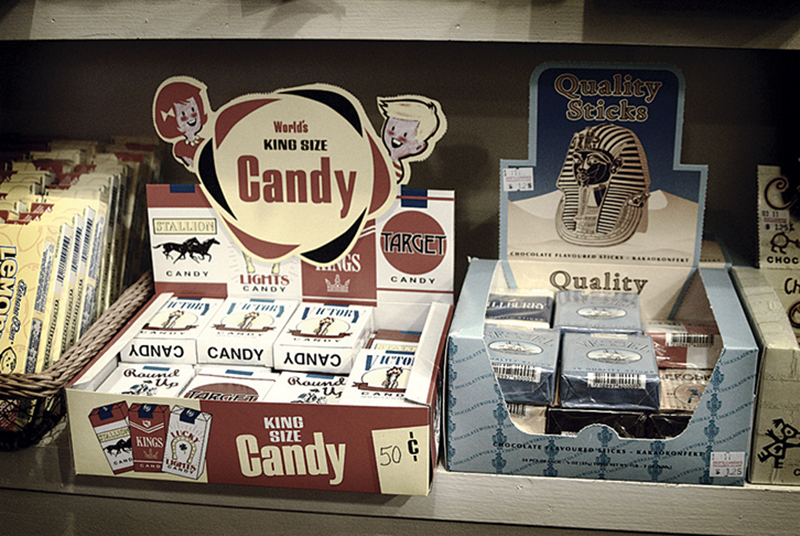 Candy cigarettes were first introduced to the American market in the 1930s, and many were made to look like real cigarettes, with one red-dyed tip and a layer of powdered sugar inside the wrapper that could be blown from the cigarette to mimic smoke. Even the packaging looked like a box of cigarettes.

Back in the ’30s, people weren’t as aware as they are now of the health risks posed by smoking. But by the late ’60s, candy cigarette manufacturers began to receive some pushback from concerned citizens who worried that children who played with candy cigarettes would be more inclined to smoke later in life. Turns out, they may have been right.

Regardless of whether candy cigarettes were a tobacco industry ploy to brainwash would-be smokers, candy cigarettes fell out of favor by the 1980s — and were replaced in popularity by Big League Chew, a shredded bubble gum that looks just like the “chaw” tucked between many major league baseball players’ cheek and gum. But that’s a tale of candy controversy that can be placed back in the wrapper and saved for another time.