The heat and humidity of North Florida summers limit the options for adding color to the home landscape, but there are a few possibilities.

Vincas, the herbaceous summer bloomer, handles the area’s high heat with ease. Four species are evergreen and are most commonly encountered locally, but one is deciduous and will die back in autumn.

Reaching a height of about two feet, they are ideal as foundation shrubs or in mass plantings in the landscape. Colors for blooms range from white to blue and purple.

Their ability to handle mildly acidic to mildly alkaline soil gives the homeowner leeway to plant in a variety of locations. This is especially important for new construction where concrete or mortar scraps raise the soil’s pH in close proximity to the home.

Additionally, they are one of the few bedding plants that will successfully tolerate shade and full sun exposure. Leaf mulch and pine straw will help stabilize soil moisture and moderate temperatures in the root zone.

Planting sites should have well to moderately well-drained soils. Excessively hot and dry locations are not suitable even though this plant is somewhat drought tolerant.

A non-native plant, vincas will spread if given the opportunity. Their prostrate growth pattern with slender trailing stems will cover an area devoid of other plants. Many of the stems will root, forming new plants.

Another heat-tolerant summer option is coleus, which has a wide variety of colorful leaves and combinations. They share many of the positive traits of vincas but are susceptible to a variety of pest species.

Neither plant is salt tolerant, meaning they are not good choices for coastal locations. 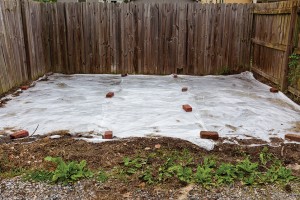 The dog days of summer are the best time to use the sun’s energy to control a variety of pests. This can be accomplished by solarization, trapping the sun’s heat in the top few inches of the soil.

This technique is accomplished by covering an area with clear plastic for at least six weeks. Clear plastic sheeting will let the sun through to the soil and heat it to lethal levels for weed seed, insect eggs and fungi.

Pest populations will remain suppressed for three to four months, sometimes longer. Black plastic is not recommended because it reflects too much of the sunlight to be effective. 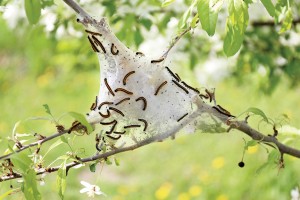 Eastern tent caterpillars build large, thick nests in the forks and crotches of many kinds of trees, especially cherry. The silky, tent-shaped nests are easy to identify on the upper branches of host trees. The caterpillars emerge in spring and go through six developmental stages. A few survive to become small nocturnal moths. The female adult moth lays her eggs in a single batch from May to July. There are 200 to 300 eggs laid in the group. The mass of eggs is shiny, reddish-brown and looks like dried foam. They are ordinarily about 6 inches back from the tip of a thin twig in the host tree. In approximately three weeks, the eggs contain fully formed caterpillars, but the small caterpillars remain in the eggs until the following spring. In late February to mid-March, they chew their way through their eggshells ready to devour tender leaves as their host tree is in spring bud. The voracious larvae immediately infest and, if in sufficient numbers, defoliate oak, plum and poplar. Usually, the trees recover after a few weeks, but weakened or diseased trees may die. If safely reached, nests can be removed and the cycle disrupted. Heavy infestations may require a pest control specialist.