An Act of Faith

Ever seen an act of faith? For the last several months, a massive example has been taking shape on Thomasville Road in northeast Tallahassee. There, within a horn’s honk of one of the city’s busiest thoroughfares, rises a 36,000-square-foot, multi-towered, English-inspired, Gothic, cathedral-sized church that is, indeed, an act of faith.

The new St. Peter’s Anglican Church, rising from a dusty plot four miles north of Interstate 10, will be a monolith the likes of which neither Tallahassee nor North Florida has seen. Designed to seat up to 1,000 faithful, the building, scheduled for completion this spring, would not be out of place in 13th-century Britain and reflects what its clergy and parishioners believe to be a historical and theological commitment to their church.

Still, a massive edifice like the new St. Peter’s with its 100-foot bell tower, 24 spires, two 12-panelled rose windows and over a dozen other custom-designed English stained glass clerestory windows is not the typical structure that a small “splinter” group recently separated from its mother church would seek to build. But Rector Eric Dudley had no doubts. He was thinking big from the start.

“In 2005, about 700 members of St. John’s Episcopal Church decided that we needed to sever our relationship with the Episcopal Church to which we then belonged,” he said. “We are not Bible fundamentalists, but we take the authority of God’s Word very seriously. We felt the need for Holy Scripture to be the principal guide in the life of the church. We also desired to follow in the great Anglican Tradition.”

Shortly after leaving the Episcopal Church, the small group was given the opportunity to buy its own church building, a traditional brick Gothic on Thomasville Road that had served as home to previous Pentecostal and Evangelical denominations. Yet even as they signed the papers, Dudley and his core group of planners believed that the original space was merely temporary. What they needed however, were some heavenly signs for where to go.

While they waited and looked for the right place to build a new church, the small original band of parishioners began to grow. From 700, the congregation rose to 900, then 1,000. By 2012, it was clear that with its current 1,400 members the little brick church simply would not do. A heavenly sign would be much appreciated.

That’s when Jack Buford, a parishioner and founder of Tallahassee Land Development awoke one morning with a thought. He knew of a family living right on Thomasville Road in which the father had recently died. He wondered. He put in a call and discovered that the family had only the day before decided to sell its visually prominent 8 1/2 acres. A daughter in the family, a Realtor, would be listing the property, but had “not gotten to it yet.” Perhaps the clearest sign, Buford decided, was that the mother had expressed the hope that “some church” would buy it.

With what felt like a parting of the heavens, Buford, Father Dudley and St. Peter’s Building Committee prayed together, then quickly turned to the congregation with a proposal: They would make an offer but needed to come up with $1.4 million — in cash — in 90 days.” Ninety days later, St. Peter’s wrote a check for the $1.7 million offered up by its members.

From there dreams and reality began to meld. A phrase in the Anglican liturgy reads:
“ … worship the Lord in the Beauty of Holiness … ” And the St. Peter’s planners believed that worshipping in the holiness of beauty would be just fine, too. With architect and church member Bradley Touchstone, they set out to design a church that would inspire, awe and “last for hundreds of years.” They wanted something that suggested longevity and timelessness; something paying homage to the Anglican Church’s classical lines.

That tradition, the Anglican Church itself, had come into being in 1534 when Britain’s Henry VIII was having trouble obtaining a divorce from Catherine of Aragon. Severing himself from the Roman Catholic Church, he set up the Anglican Church as the Church of England. A Roman Catholic might find little difference in the liturgical verbiage, the use of dramatic processions, the fragrance of incense and the sight of the faithful genuflecting and making the Sign of the Cross. Still, Father Dudley reminds, “We are a modern church, filled with young families who simply have felt a need to leave some of the ‘trendiness’ of some newer churches and seek the solid, tradition-filled majesty of Anglican worship.”

With a projected $10 million in their building fund, Dudley and his research planners made trips to England to digest church architecture where iconography plays a distinctive part. “Like the European churches, St. Peter’s is laid out in the form of a cross,” says the rector. “The 24 spires represent the 24 elders who worship God in the Book of Revelation. Five Celtic crosses atop the structure represent the five wounds of Christ on the Cross. Oriented to the east, the morning flood of light through the rose window will represent Christ’s returning with the morning sun.” There is even a columbarium, a form of ancient crypt beneath the church that will hold more than 2,000 interred souls.

Yet when it came to the structure itself, though it may look ancient, planners wanted their “Gothic” living up to 21st-century standards. Michael Imbler, project manager for Childers Construction, describes the innovative products that will ensure the massive church is thoroughly modern. “We used something called Insulating Concrete Forms, in which the walls go up looking like two 1 ½-inch sheets of Styrofoam between which we put steel rods and poured concrete. This provides soundproofing and insulation equivalent to R 40 or 50. The exterior is a rock-cast veneer stone screwed on with an air space between it and the walls for additional insulation.” The result will be a medieval cathedral built to LEED standards. 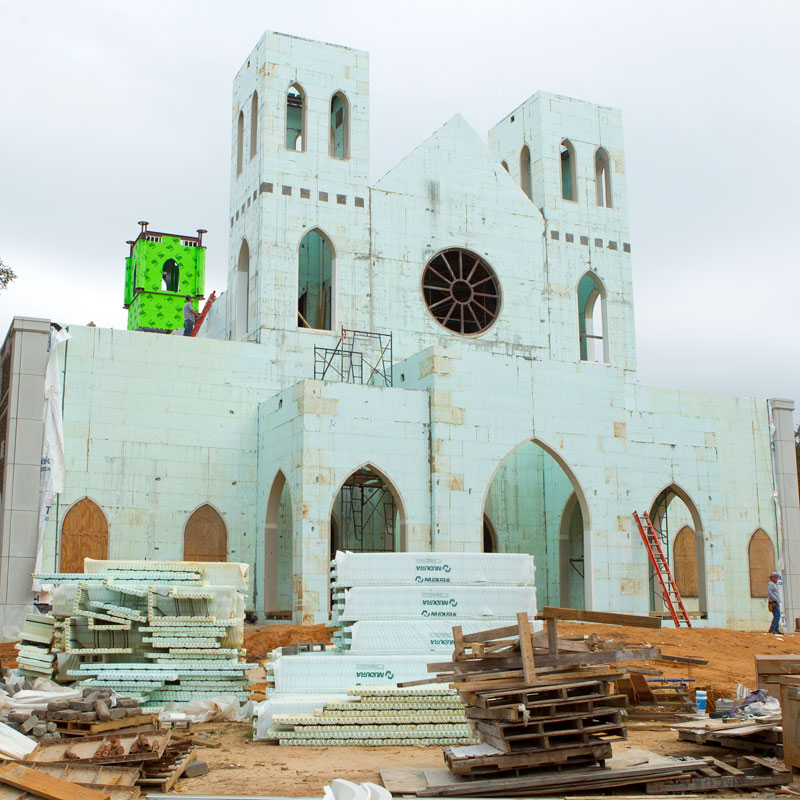 Underneath the traditional looking exterior, the new church is utilizing construction techniques and materials that are definitely up to 21st-century standards.

While weather and the exigencies of construction could change the date, the church is set to be finished by Easter 2014 at a total cost of about $13 million. A parish hall is planned and will be built on the currently owned land. It will be about 10,000 square feet and incorporate classrooms, a kitchen, parish meeting area and offices.

A projected plan to symbolically demonstrate the transition from the old church to the new involves a procession from the Midtown building to the new St. Peter’s on Thomasville. The actual consecration of the new church will occur on June 14, when construction will have been completed, members moved in and familiar with the new facility, and at a time when the Rt. Reverend Neil Lebhar, Bishop of the Gulf Atlantic Diocese of the Anglican Church and the Most Rev. Robert Duncan, Archbishop of the Anglican Church in North America, can attend.

Recently, traffic has begun to slow on Thomasville Road as the true mass of St. Peter’s comes into being. Commuters watched as workers clambered across miles of plywood sheathing on the roof and oglers gasped as a crane lifted a 25,000-pound portion of the church’s bell tower into place. Even members of the construction crew find themselves absorbed in not only the work of building but also in a kind of sacred mission, when each morning one of St. Peter’s priests arrives on the job site and, with hard hats off and heads bowed, the men are led in a prayer for safety and the guidance of God’s hand.

And so, will they come? Dudley has no doubt. A leap of faith, an act of belief and the sheer beauty and engineering marvel of his new church leaves him confident. In a town as spiritual as Tallahassee — there seems always to be room for one more House in which God may reside.