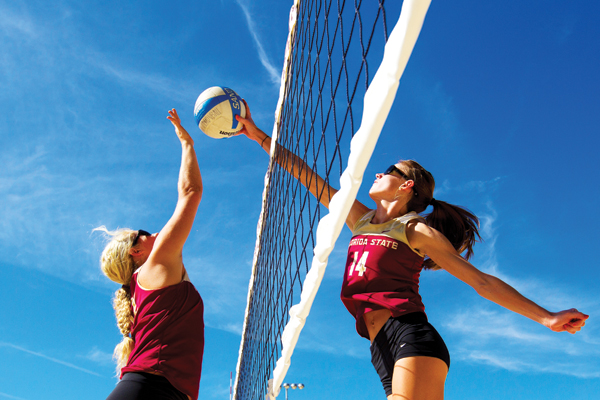 Katherine Plessy (left) attempts to block a shot by Mallory Kiley (No. 14).

But if you’re expecting to see babes in bikinis, you’ve come to the wrong place. The team wears tank-top jerseys and spandex briefs, and this not-so-traditional uniform showcases the toned bodies of serious female athletes. 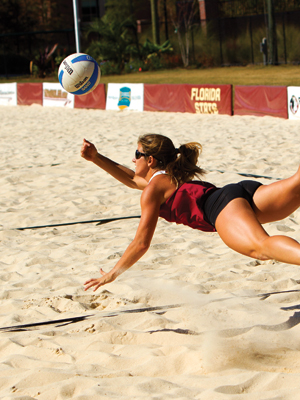 And it’s no accident these women are in top physical shape. The season is only eight weeks long, but Head Coach Danalee Corso holds practices year round to keep her team competitive.

Fitness and flexibility are extremely important for sand players. Because the sport is played two-on-two, sand volleyballers have to cover more ground and touch the ball more often than their indoor counterparts. While players generally specialize in either the hitting blocker or the passing defender position, it’s important to Corso that her girls can do it all.

The origins of the sport can be traced to the 1920s, but 2013 is only its second season as a collegiate sport. If 40 different schools sign up within the 10-year time limit, sand volleyball will become an official NCAA championship sport.

FSU’s first season was a great success. The team went undefeated throughout their regular season and took third at the National Championship. The season begins March 10, but their first home tournament will be held March 24. Home tournaments are free and held at the sand courts located next to the FSU track on Spirit Way.

If you go, expect to be a part of the action. Players are so close “you can see them get sand in their mouths,” says Corso.

For an extended story about the FSU sand volleyball team and its players and additional photos, visit www.tallahasseemagazine.com.