The Shapes of Music

There’s no mistaking the sound of a Sacred Harp singing group. If you grew up in any small wooden Primitive Baptist church in the South, you may have heard a version of it. Or, you might have even heard it in movies like “Cold Mountain.” It’s a loud, rhythmic, a cappella form of song — chant-like, primitive and powerful. It raises the rafters and makes the floor shake. For those who experience it, and who “get it,” there’s an undeniable emotional power at work behind this living, musical tradition.

A small and dedicated group of Sacred Harp singers call Tallahassee home, and they intend to pass this old tradition on to future generations.

“Sacred Harp” was one of about 100 oblong hymnals produced in the mid-19th century. The first edition was written by B.F. White in 1844, and new editions of the book come out every other year or so. But the music theory it codified, called “shape note singing,” goes back even further. Shape note singing was an early way of teaching rural people how to sing. The name “shape note” comes from an early 19th century system of writing and printing notes in special shapes that enable the untrained to quickly identify different sounds on a music scale. Unlike a conventional seven-note scale and its familiar set of syllables (do-re-mi-fa-sol-la-ti), the “shape notes” of Sacred Harp singing use only four syllables (fa-sol-la-mi) to teach pitch.

“It’s part of a practice that was originally developed in New England, the Boston area, by the Puritans and got pushed out after the Revolutionary War,” said Sarah Kahre, 29, a music history major at Florida State University.

Kahre started shape note singing in the spring of 2007, after she attended a screening of “Awake, My Soul: The Story of the Sacred Harp” at Railroad Square. At the time, she was interested in writing a term paper for a class on music history in the United States, and her professor suggested she go see the movie. She’s been hooked ever since.

“I’ve never sung Sacred Harp and not been happy about it,” she said.

Sacred Harp is not the only form of shape-note singing, but it seems to be the most predominant kind today, Kahre said. Once it left New England, shape notes moved South and found a home among country churchgoers throughout the hills and piney woods. These rural folks used the four-note system to teach people how to sing, and there were different shape-note books in different regions. The Sacred Harp book itself originated in Georgia and spread from there, she said.

“You had other books. There was a publisher in Virginia, the Hesperian Harp, there was the Harp of Tennessee, and Missouri Harmony was in Missouri and Illinois. The Sacred Harp is closely related to a South Carolina book called the Southern Harmony because the publishers were brothers-in-law. There’s a story that B.F. White had contributed to Southern Harmony originally and was a co-compiler of that book and then, when his brother-in-law went out and got it published, B.F White’s name wasn’t in it, he got mad and moved to Georgia. He came up with his own book.”

Most of the other forms of shape note singing died out after the Civil War, she said, and other styles changed over time. 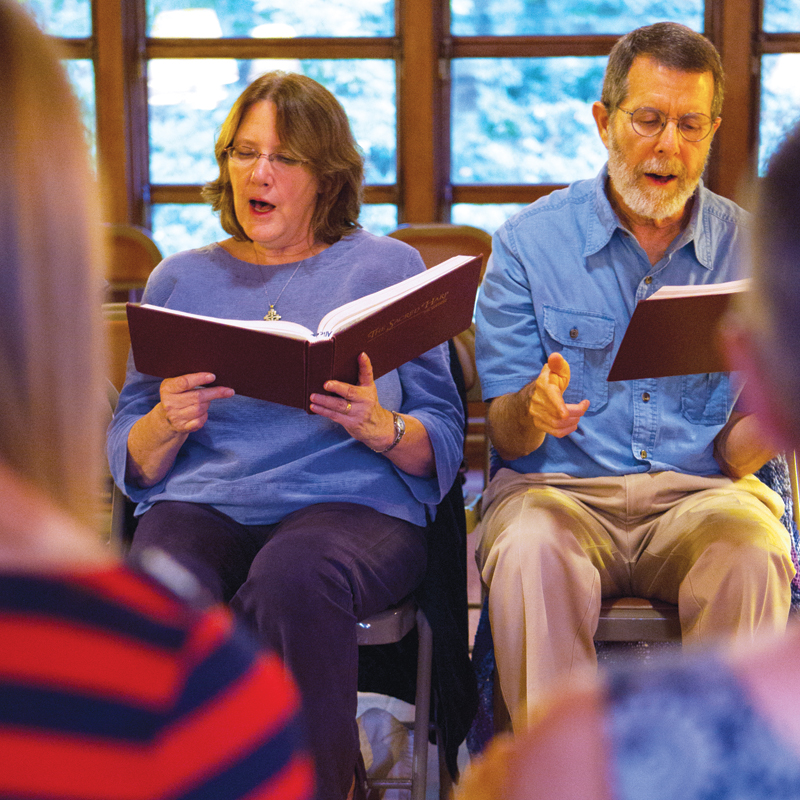 To a musician or singer steeped in traditional music theory, the four-note system may seem a little strange. But the effect of a roomful of voices singing to the rooftops is a very moving experience. Shape-note singers arrange themselves in a hollow square, around a central song leader. Each side of the square is assigned a voice part; bass sits across from treble, and alto sits across from tenor. This inward-facing arrangement focuses the vocal power of the singers.

“In sings where a lot of people are singing, if the acoustics are good, maybe your book vibrates, your body vibrates, and you go from one song to another song and there is such a variety of spiritual subject matter in the songs, that it’s an intense experience,” said Alice Bejnar of Tallahassee, one of the founding members of the local Sacred Harp singing group.

Being inside that sound is amazing, Kahre said. “When I teach students about it, and you play it for classes, you see people cringe because it is a very rough sound. It’s not that western classical ideal of beauty,” she said. “I explain to people, you know, Sacred Harp singers do hear Sacred Harp singing as beautiful, but the beauty comes from that power of the singing. The reason you sing so loud is that any imperfections that might be in the singing, when you sing it that loud, and have that many people doing it, it’s like burning off the chaff. It doesn’t matter anymore. Because of the power of the sound that surrounds you.”

Carrying on this old-time folk tradition led to the creation of the local singing group nearly 20 years ago, Bejnar said. Today they have a core group of between eight and 15 people, and meet twice a month at different venues. Their numbers are often augmented by out-of-town visitors who have been known to drive three hours one-way for a chance to sing Sacred Harp.

Bejnar fell in love with Sacred Harp on a trip to Tennessee years ago, and that newfound musical awareness led her to discover shape-note groups in parts of Alabama, Georgia and Florida.

“I heard of Sacred Harp and sang it in my early to mid-20s and immediately loved the sound of it,” she said. “It definitely was in my blood, and I was motivated to go to those sings in North Florida and South Alabama. And the people are so friendly. If you sang Sacred Harp, they loved you. No questions asked.”

Reaching out to other groups led her to the Lee family of Hoboken, Ga., a tiny town just east of Waycross on the northern edge of the Okefenokee Swamp. The Lees are a family community of shape-note singers and, even though Sacred Harp isn’t meant to be a performing art, family members made two appearances at the Florida Folk Festival back in the late 1950s. But for 50 years or so after that, the community of shape-note singers kept themselves isolated, Bejnar said. That is, until they were invited to the first big Tallahassee group sing in 1994.

“The Lees came to our sing, and friendships began between that family and not just the Tallahassee singers but the singers in Southeast Alabama and North Florida, and they got to know each other,” she said.

Kahre said the Lee family developed their own unique singing practices during the time they were separated from the larger Sacred Harp community.

“So, they kind of became celebrities in the Sacred Harp world after they rejoined, because they’re such a strong singing family and they sing so well. They also sing differently in interesting ways,” she said. 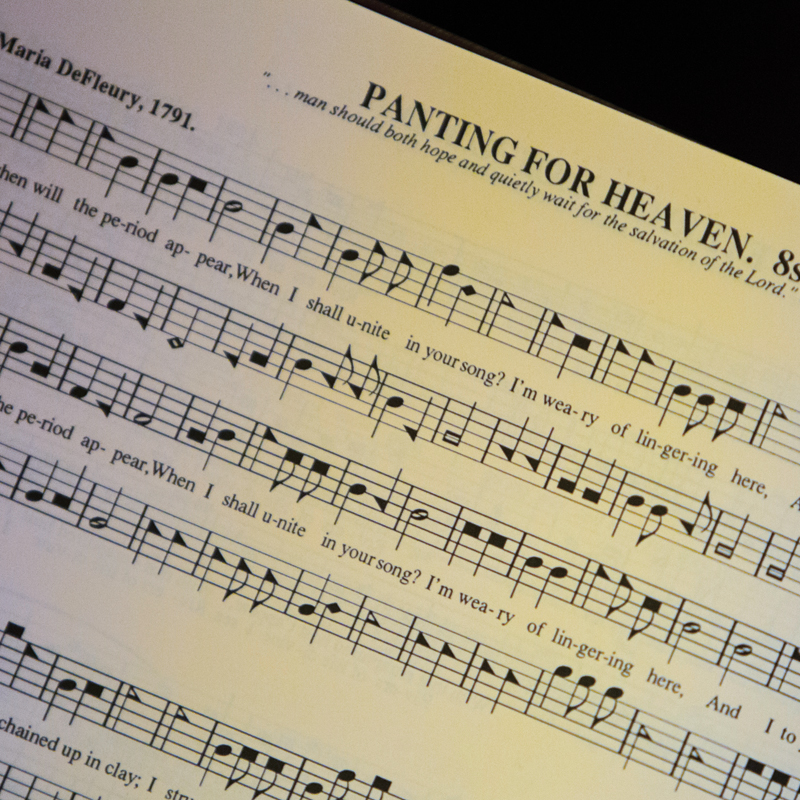 Shape note singing may have close ties to religion and the South, but today it is non-denominational and can be found all over the United States. It spread because it was a distinctly American folk art that appealed to everyone regardless of region or religion.

“(Sacred Harp) was really an underdog book,” Kahre said. “Not that many people were singing from it up until the mid-20th century when music scholars started discovering it in the late 1920s. About 1976 people started getting really interested in American history, so there’s some involvement there. Also, some influential leaders in Georgia in the ’70s, ’80s and ’90s really worked on getting Sacred Harp spread nationally … because people were so interested in American folk music. So it appeals to people in that sense, across the country, and that’s why you can find it all over the place now.”

While it may have been largely divested of its “church” background, it can still touch some people in a spiritual way. Different people will get different things out of it, but others may just turn completely away, according to singer Morgan Bunch, 65, a data administrator at the Florida Department of Transportation. Bunch said he’s known about Sacred Harp for more than 40 years but started singing it at the first Tallahassee all-day sing that Bejnar started some 20 years ago.

“People tend to have very strong reactions to the music,” he said. “The first time I heard a Sacred Harp song, I thought it was the most incredible thing I had ever heard. This was a recording. It was some years later before I actually went to a Sacred Harp singing, and it was like finding a missing piece of myself.”

On the other hand, some people react a little bit differently, Bunch chuckled. “My sister came through Tallahassee one time and I said ‘You’ve got to listen to this music.’ and played a recording for her, and she got this horrified look on her face,” he said.

But the music can have other effects. Kahre grew up in a Methodist church but today considers herself an agnostic. She was never exposed to anything like Sacred Harp singing before she joined the Tallahassee group in 2007. Still, the ancient hymns she’s learned since joining the song group have helped her deal with some trying times.

“I lost my grandfather a few years back …. I am not a religious person, (but) there was one tune in particular that I found really comforting,” she said. “I’m not sure that I believe in heaven … and yet I’m comforted by this tune telling me my grandpa is in heaven. Even when I was in Missouri for the funeral with my family — and no one in my family sings Sacred Harp — the songs that came into my head were all Sacred Harp songs, and that was just a part of how I got through that.”

Bejnar knows from her own personal experience how comforting the songs are.

“Both of my parents have died since I stared singing Sacred Harp, and I’ve heard other people say this in our group, that it helps us through those times,” Bejnar said.

“Because it’s not a worship service, not everyone who is there necessarily needs to respond to the music in a religious way,” Kahre said. “That expectation isn’t there. Well, for some people it is, for others it’s not.”