Surpassing stereotypes and barriers, the singer is driven to touching lives through song.

The variables involved in “making it” in the music business are vast.

It takes more than talent. In so many cases, the difference between making it and falling short can come down to dumb luck.

But the ones who get lucky didn’t sit on the sofa waiting for lightning to strike.

Everybody who survives as a professional musician — from the wedding band cover singer all the way up to Kendrick or Beyonce — got there by dint of boatloads of hard, persistent work.

Royce Lovett is still reaching for the brass ring. He has the goods: With wholesome good looks, an expressive voice, great songwriting skills and charisma to burn, he knows how to connect with his audiences.

Born and raised in Tallahassee, Lovett reflects his family’s deeply entrenched religious grounding — he grew up surrounded by music in his family’s church — in his socially conscious lyrics and his conscious effort to reach a broad and diverse audience.

He signed with Motown in 2014 after one of their reps heard him by chance at a showcase gig.

His first year with a major label was an intense learning experience.

“In my first year, I was so stressed out. It was just so unfamiliar. I had to learn so much. But I got to a place where I just decided to be very teachable.”

Lovett is open and forthright about his faith and the role it plays in his musical expression and career goals.

Maybe this is why Motown slotted him into their “Christian music” category, even though he says, “I don’t really play so-called Christian music.”

It is an odd fit for Lovett, whose music has deep connection to hip-hop, ’70s soul, Prince and old-school torch-bearers such as Lenny Kravitz.

Expectation for an African-American Christian musician is to deliver gospel; gospel is in his sound, but it is by no means a prominent element.

And he sounds nothing like the typical white Christian rock genre. But there he is: Struggling against a pair of stereotypes.

“Getting signed put me in front of a bigger audience, but it also confused things as far as the general market is concerned.

College radio used to play my stuff, but then they stopped. ‘We don’t play gospel,’ they said, but I’m like, ‘It’s not gospel. It’s the same stuff.’ 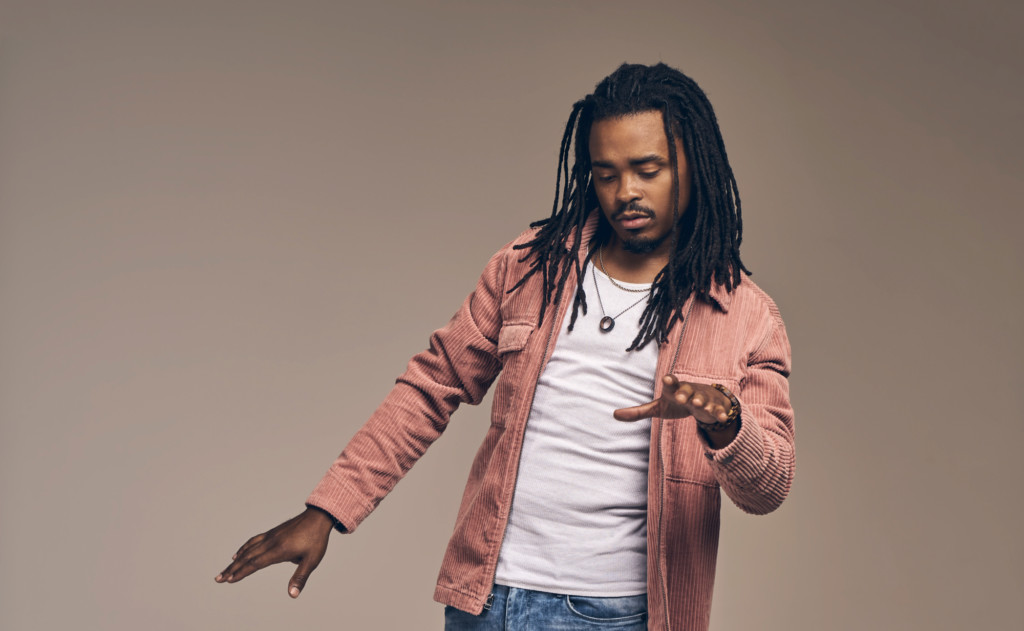 As he stays aware of the need to satisfy expectations regarding showmanship, Royce Lovett stays true to his craft. “I want my music to be some food, something that you can grow on …” he says. Photo by Adam VL Taylor

But it was coming from another side of the industry. I had not really thought about the divide between white and black music, between mainstream and Christian.

People think like, you get signed and it’s easy. I probably work harder than ever before.”

While he most frequently performs solos, a recent gig at The Wilbury found Lovett playing with his top-notch band in front of a full house.

No surprise there; his infrequent hometown shows are typically packed.

What stood out was the demographic range of the audience, a rainbow mix of old and young, college kids and townies, gays and straights and racial diversity.

Somehow, in this town not noted for its permeable racial divide, Lovett has tapped a vein that makes his audience — at least here in his home — one of the most representative cross-sections of what America truly looks like circa 2018.

“I’m living my dream, being able to connect with my community in a way I never thought I could. I’m encouraged to tell all these stories, getting races together, getting financial statuses together. These new ideas I have, this new music I’m about to push out, I’m just so excited and expecting something really great out of this year as far as artistry goes.”

Lovett always looks to refine his craft. At the Wilbury gig, he was trying things out, everything from slight changes in arrangements to the way he gestures with his hands and body.

He is keenly aware of the need to satisfy expectations regarding production values and showmanship, all while staying true to the music.

“I want my music to be some food, something that you can grow on, meditate on and find some nourishment,” he said.

“There are a lot of topics in music that are negative or aren’t conducive for growth. As a young black man in America, a lot of the music — not all of it — sometimes isn’t the best image or messages of what you can strive for and what you can be. So, yeah: Food.”

Our time was running out: Lovett’s wife of nine years, Hannah, was on her way to pick him up with their two sons, Levi, 6, Davi, 2. Lovett is grounded by faith and family, which keep him from forgetting who he is and what he aims for in life.

And that is how he defends himself against a brutal truth about the music industry: It just isn’t fair. If the music biz were fair, Royce Lovett — talented, handsome, smart and brimming with charisma — would someday soon ride high on the charts.

Might happen. Might not. Lovett would love to be a chart-topping artist, but he is sharp enough to realize he cannot control blind luck. He keeps his eyes on other markers of success.

“There’s living your dream, there’s financial freedom and there’s fame,” he said. “I think you have to define those things and really pick what you want. I’m not saying they can’t mix, but I have to remind myself, I feel so grateful at the end of the day that I get to live my dream.”

Lovett and his team are working every angle. They analyze streaming stats and make sure he regularly plays the towns and cities where the numbers are strong.

If he does not find fortune and fame, it won’t be from lack of trying.

But you have to believe it when this young man looks you in the eye and says, “I just want to touch lives and make good music doing it.”