Riding at the Ring

Tallahassee’s ‘Ring Tournaments’ Were Colorful Odes to Chivalry and Beauty 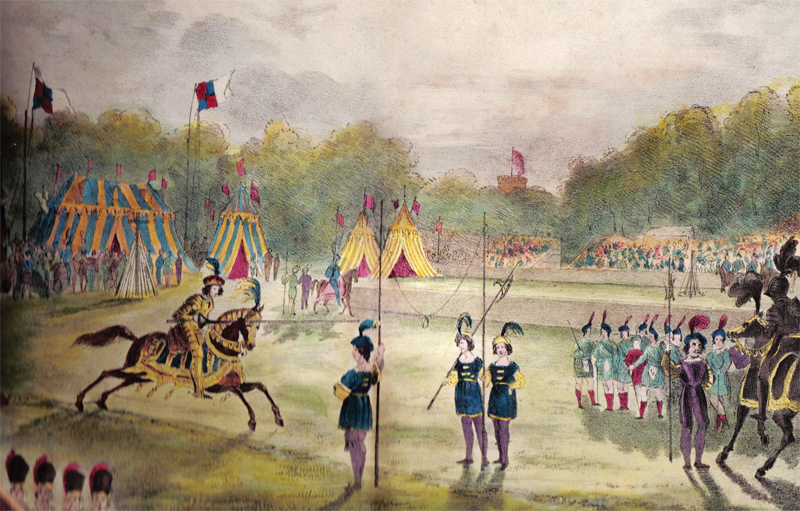 Medieval tournaments such as the one pictured here were the inspiration for Tallahassee’s 19th century contests.

It could have been a scene right out of Sir Walter Scott’s “Ivanhoe.”

Gaily bedecked knights armed with lances sat on powerful warhorses, which impatiently snorted and stomped the ground. Fair maidens in gossamer gowns waved to their champions. Heralds tested the limits of eloquence as they extolled virtue and chivalry.

And reporters took it all down for the newspaper.

OK, it wasn’t exactly like the knights of old, but the ring tournaments that occupied the South’s upper class during the mid-19th century provided a connection to earlier times and culture.

“The Ring Tournament in the South was a revival and also an elaboration of the ancient sport of riding at the ring,” William G. Dodd wrote around 1947.

Dodd was a Florida State University English professor in the first half of the 20th century, and an article he wrote about ring tournaments was published in the Tallahassee Historical Society journal Apalachee 1948-1950.

These joust-like tournaments flourished in the South from 1840 to about 1890, Dodd wrote. At least seven of these tournaments took place in Tallahassee during the 1850s. Naturally, the Civil War put a hold on these elaborate affairs, and the last one held in postwar Tallahassee was in 1870.

In the common perception of a “joust,” two mounted knights ride at each other with lances and attempt to dispatch one another. Other contests of skill were less bloodthirsty.

“Thrusting at the quintain” was an old Roman sport in which a rider tried to score a direct hit on a rectangular piece of wood. Over the centuries, the wooden quintain was replaced by a small ring suspended from an overhead support. Thus, it became a greater test of skill and precision, and Dodd wrote that the exercise trained the eye and arm of the knights of old.

“This kind of sport would flourish naturally in a society which cherished chivalric ideals, and which loved horses and horsemanship, and perhaps in no other,” Dodd wrote. “Such was the old South.”

Dodd wrote that that the “tilting ground” of Tallahassee’s ring tournaments was located on the east side of Thomasville Road. He noted that a newspaper ad announcing the 1870 event placed it not far from the entrance to today’s Los Robles neighborhood. Earlier writers, he wrote, describe the location as a natural amphitheater or valley because it had sloping sides. According to historians, the riding course was 200 yards long and ran north. If so, it may have paralleled portions of present-day Colonial Drive.

“The present Colonial Drive, which extends from Sixth Avenue to the Thomasville Road, stretches across the valley of which the earlier writers speak, and, indeed, traverses the very course over which the knights of the tournament rode,” Dodd wrote.

As it does today, Colonial Drive features a well-defined slope where it intersects with Sixth and Seventh avenues. The contestants began their bouts from the bottom of this slope, while spectators in carriages entered the field from Thomasville Road and observed the proceedings from the west side of the course.

On the north end of the playing field a small, ivory-colored ring was suspended from a tall archway. The ring was easily removed because it hung precariously on a shallow hook hanging in mid-air. As Dodd described it, “The difficult feat which the knight attempted to perform was to ride the length of the field at full speed and carry off the ring on the point of his lance.” Once this was accomplished, the knight pranced toward the viewing stands to name his “queen.” The games were usually followed by a ball that evening.

Ring tournaments in Tallahassee were majestic affairs full of pomp and circumstance. Local officials — often military men and judges — would give stirring orations, introduce the “knights,” and encourage them to bear themselves up with honor in the coming contest.

“The speaker enjoined the contestants to do their devoirs (duties) as true and valorous knights, never forgetting that the eyes of the Fair were upon them, and that the honor of crowning his own lady Queen of Love and Beauty was the high prize for which each was to strive,” Dodd wrote.

In true romantic fashion, the contestants took the name of a real or fictitious knight. Dodd wrote that the names assumed by the contestants showed they were well versed in the poetic literature of the day.

“The wide variety of names assumed indicates that these nineteenth century knights had read well their Malory, Spenser, Scott, Tennyson, Hallam and Bulfinch, as well as their Froissart and Cervantes,” he wrote.

Their clothes also followed suit, for the most part, Dodd wrote. Some riders wore ordinary riding garb, with only a colored sash and matching hat plume, but others went above and beyond the ordinary.

“More often the costumes were ingeniously devised, and on them, perhaps, more imagination was lavished and more care and money expended than on any other aspect of the tournament,” Dodd wrote.

The Knight of the Desert (actually Bernard Ellis of Tallahassee) embodied this spirit during the 1851 tournament, according to historian Bertram H. Groene in “Ante-Bellum Tallahassee.” Groene wrote that a reporter for the Floridian and Journal described Ellis as having dressed in “a jacket of red cashmere, with scarf and slippers of the same, embroidered with white, full trowsers of white silk, confined at the ankles, and a turban of the finest muslin, adorned with silver spangles … .”

However, during the 1852 joust a couple of months later, the winner of the event was the Knight of Miccausukie, who came from the settlement east of Tallahassee. Not bowing to knightly tradition, this particular contestant was dressed like a Creek Indian, according to the newspaper. There was also an Unknown Knight, an enigmatic figure who concealed his face with a black mask.

Each event featured three bouts, allowing each “knight” three chances for success. And like a primitive NASCAR race, the tournaments were notable for their spectacular accidents. Stirrups were prone to fail in mid-gallop, and the knights often had their hands full controlling rambunctious steeds. El Caballero de Esperanza, mounted on a “magnificent roan,” would have made a modern stuntman proud for safely recovering from a full-speed tumble.

“Suddenly his horse shied, and running beyond the lists and down an incline, slipped on the icy grass, fell, and turned a complete somersault,” Dodd wrote. “But the knight’s agility in extricating himself averted any harm from the accident.”

Another high-spirited mount led to a particular display of chivalry on the part of the Knight of Tuscawilla. His unruly horse was hard to control, but the knight still managed to tie with three other contestants. Despite this, the other knights agreed he should be given an extra “tilt” at the ring, which Tuscawilla accepted. However, during the run, the knight purposefully knocked the ring off the hook, “thus of his own accord surrendering his chance to become the Victor in the Tournament,” Dodd wrote.

“This gallant gesture … was greeted by cheers of admiration and approval from one end of the lists to the other,” he wrote.

Once a knight was victorious, he immediately crowned his “queen” on the playing field while the runners-up selected maids of honor who would accompany her in an open carriage to the city for the closing festivities. A fancy dress ball rounded out the evening and gave the local women a chance to assume their own whimsical romantic identity, Dodd wrote. They gave themselves names such as Diana, Cupid, Titania, Undine, Folly, Dewdrop, the Maid of the Mist, La Belle France and Ophelia.

But there was one name that topped them all, according to Dodd.

“A popular feminine impersonation was Night. The costume was a gown of midnight black, studded with gold or silver stars,” he wrote. “(A) reporter, on encountering one of these, declared that he never knew before that night could be so dazzling; and that, while he admired Knights, he liked them better with the K left off.”