Sisterhood is a special bond, but it’s one that time and distance often erode.

Thanks to the Tallahassee Builders Association, though, three Capital City sisters, all in their 90s, are together again in a home that is safe, functional and aesthetically pleasing.

“It looks beautiful,” said the most outspoken of the sisters, Autie Searcy McCallum. She had previously lived in the dwelling with her husband, Emory, who passed away in the house in 2007. Through recent years, the structure had been unoccupied. 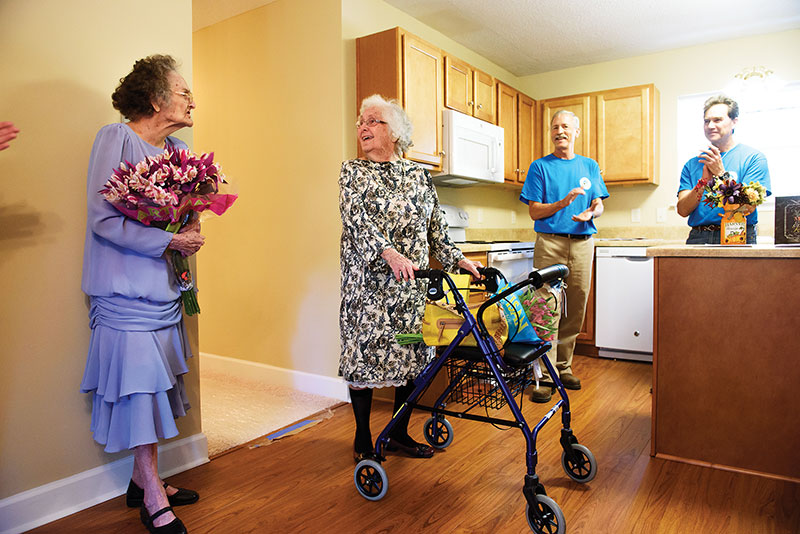 Thanks to the generosity and expert services of the Tallahassee Builders Association, three sisters, nonagenarians all, have been reunited beneath a familiar roof.

“When I think about it, I just want to cry,” McCallum said. “And will you look at that closet.”

Autie and her sisters, Tillie and Margaret, spent their adult lives working as public employees and raising families in Tallahassee. They were close, but eventually life sprinkled them across the region. When the Builders Association’s new charitable outreach program, Builders Care, heard about the sisters three, Autie, Tillie and Margaret were at separate facilities — only miles apart, but worlds away from one another.

“They’re very sweet,” laughed nursing assistant Yolome Williams. Her daily care of the three women gives her a particularly keen inside look. “They’re definitely sisters. They fuss at each other and then they take care of each other.”

As the first major project of the Builders Care initiative, the association was able to completely reimagine the space for its big debut. Hallways were made wider, the bathroom handicap accessible and the outdoor space perfected for relaxation and late afternoon glasses of iced tea together.

“This was their original home,” said Scott Eppes, from Eppes Decorating Center. His company donated the paint for the entire house. “That made it a good place to start.”

From the roof to the flooring, every bit of product and labor was donated. Throughout the six-month process, over 30 Tallahassee companies were involved.

“How come we are so lucky?” questioned Autie. “We don’t deserve this. I tell you the truth. We really don’t.”

“Well you go on then, and I’ll have it all to myself,” chimed in Tillie.

“She’s a big flirt,” twinkled Autie. “I mean she flirts with everything.”

For ladies in their 90s, the sisters’ friendly banter is impressive. And that’s just the sort of unexpected rewards volunteers, including Sharyn McThail, who worked on the project on behalf of Federated Insurance Co., grew to look forward to on the job site, located just off of Tharpe Street.

“We thought it was a great cause,” said McThail. “When they started the Builders Care group within the Tallahassee Builders Association, it appealed to us immediately.”

Since moving in late last fall, the sisters have made the three-bedroom two-bath home their own. Of course, others have been called in on a few occasions (there were pictures to be hanged, conversations to be had, memories made, etc.) but largely the ladies and their nurses have been on their own.

“When I get to heaven, I’ll finish thanking them and I promise it’ll be in adequate words, too,” said Autie. “I’ve had a lot of things to be thankful for but nothing like this.”

“I’ll remember this as long as I live,” ended Tillie.