The Tallahassee landmark is back into private ownership with an eagle eye on the next generation of golfers.

Capital City Country Club, the most historically significant golf and country club in Tallahassee, has seen it all. Through lean years and good years, it has remained the cornerstone of the community’s social bedrock. Before other golf and country clubs came on the scene, CCCC was the only golf course in town and played host to many prominent Tallahassee residents, legislators, judges, governors and more.

It’s a special, special place,” said Jay Revell, president of the Capital City Country Club board of directors. “If we can get more people to come … and dedicate some time and effort and investment into creating something that is really fantastic for the long term, I think the sky’s the limit for us.”

The club dates to 1908 when leading residents tried establishing a small golf course on the grounds of The Grove. Known as the Tallahassee Country Club, it proved unsuccessful. A new Tallahassee Country Club was founded on the site of the current Capital City club in 1924. The club was private until it was given to the city in 1935. The city turned it into a municipal course and enlarged it to a regulation 18-hole course designed by renowned golf course architect A.W. Tillinghast. Revell said CCCC is significant because it is perhaps the only Tillinghast-designed course in Florida that’s still in operation.

Today, the regal old flagship has gone back to being a private club and is finding new footing with improved facilities and new management. Revell praised the significant financial investments to the golf course and club made by Integrity Golf Company during its two-and-a-half year management tenure.Financial difficulties and the need for infrastructure improvements led the city to lease the property back to the Tallahassee Country Club in 1956. That was the genesis of the Capital City Country Club.

“They made at least a $600,000 capital investment into this property while they were here. If you talk to any member today, they will tell you the course, the facilities, everything is in the best shape it’s been in years,” he said.

However, Integrity recently decided to reduce the number of courses it manages, and Capital City was on that list, Revell said. The country club was quick to find another management company, Honours Golf, which is based in Birmingham, Alabama. Honours manages prestigious golf courses worldwide, including Lost Key Golf Club in Pensacola, and King & Bear and Slammer & Squire at the World Golf Village in St. Augustine. The change in management was effective June 1. Revell said it’s going to be a great partnership.

“They’ve been wonderful to work with,” Revell said. “They’ve got high levels of expertise in everything from marketing to member services down to revamping our retail operations and revamping our food and beverage operations. It’s really a great opportunity to take what we were able to accomplish during our time with Integrity and now hopefully take it to the next level. 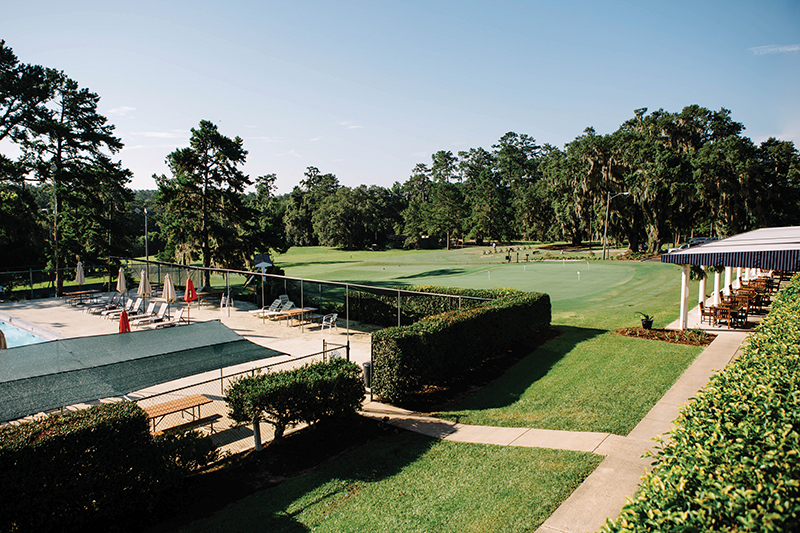 Amid the links are an Olympic-size pool, lighted tennis courts and one of the city’s largest clubhouses. From left, Tyler Woolson, Stephen Lawson, Jay Revell and Alex Hauser are big-time fans.

“Integrity specialized in capital improvements, and I think Honours is going to help us specialize and grow the membership.”

Speaking of which, general manager Mike Abate said the country club will aim its membership efforts at young people and families who are choosing to live in the downtown core once again.

“We made our membership rates and our offerings more competitive. We have a lot of fun here,” said Abate, a former Integrity manager who transitioned to Honours. “Our demographic is between the ages of 20 to 40. That’s ideal for us. Those younger families are what we’re looking for.”

“Developments like Cascades Park, Gaines Street and FAMU Way are signs that we are actually probably better located for the next century than some of the other clubs in town,” he said. “Also, the people who are really leading the golf market today are people who have a deeper appreciation for the game and its history probably than they have had in a long time. There’s a deep, growing appreciation for golf architecture that wasn’t there for the last 50 years. And I think we are uniquely situated to take advantage of that.”

Ultimately, though, all are welcome to join the club, and there are no barriers to membership.

“We want anyone who loves Tallahassee, who loves spending time with family and friends, who wants a unique environment in which they can do that, to come be a member. There’s no reason for us to hold anyone out of being a member of this club. We’re wide open to the entirety of the population,” Revell said.

Abate hopes that clubhouse renovations, improved landscaping and greens will be a big draw, along with excellent service.

“There’s a lot of good signs, and if you read into those tea leaves like I do, we can be a club that is deserving of a great membership that wants to do great things,” he said. 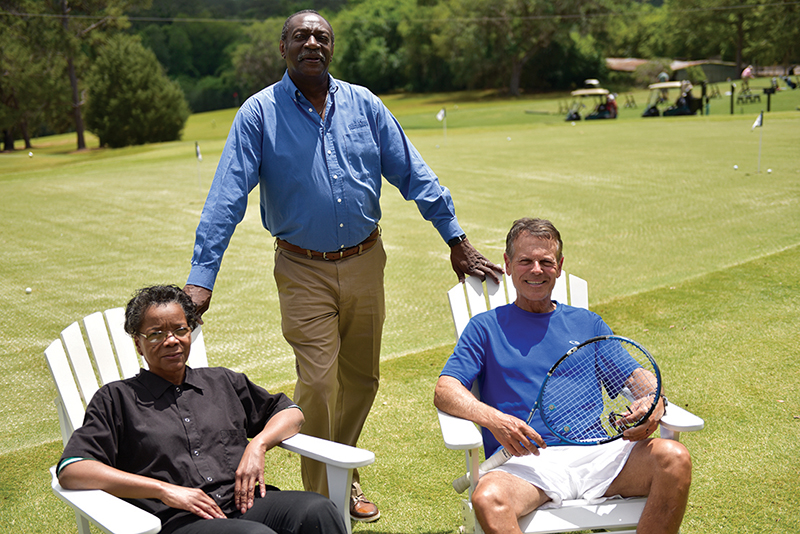 “It’s been pretty good. Back in the olden days, back when I started in ’78, ’79, it had that country club atmosphere. You had a lot of retirees, you had a lot of business owners. It has a rich heritage. Some of the most important people were here back in the old days. Most of the governors, the judges, the lawyers, all were here. Integrity has brought a lot of changes, brought a lot of things back to the club. Right now, you’re getting a lot of younger families moving back to the downtown area, and they are joining the club.”

“You do what you have to do. It’s just a challenge every day I come to work because really and truly, you don’t know what to expect one day to the next, so you really have to be dedicated to what you do and enjoy what you do. Me and Stone are like sister and brother. We’ve been friends ever since I came here. And we enjoy working with one another. I enjoy what I’m doing and get pleasure from pleasing people and getting their input in what I do — seeing what I present to them, that makes me feel like I’m really wanted here.”

“Greatest job in the world. I started out teaching (members), and I’m now teaching their children and now their grandchildren. So that is an amazing generational experience. But people are basically the same. People come to a country club to be catered to and to enjoy themselves. That doesn’t change. You hear it from every member that they love coming out here. There’s something about this place as opposed to most other clubs that they go to. They feel like there’s a level of belonging that they like.”