Police Crack Down on Drugs and Violence in Tallahassee 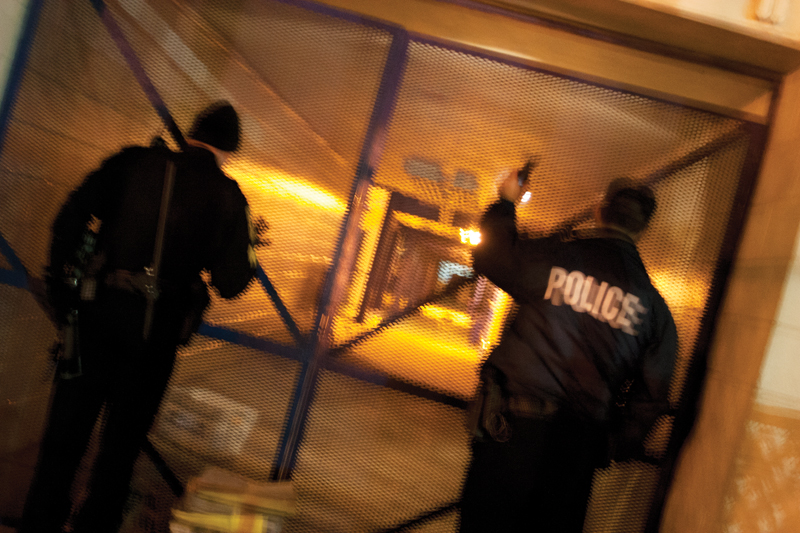 Community-based cops are tasked with rooting out drugs and violence that plague tallahassee.

The summer sun had just dropped below the horizon beyond South Monroe Street when Tallahassee Police Officer Wes Winfree sat down to dinner inside a Southside fire station.

From the quiet confines of an empty office, Winfree wolfed down the contents of his knapsack and used a computer to watch online rap videos filmed a few blocks away on Texas Street. Each clip showed groups of men who flashed gang signs, advertised drug sales and expressed a general hatred for the police department. Some of the same characters in the videos also told officers face-to-face they had planned to kill them.

“It’s definitely something you think about, but you can’t let it get in your head too much,” he said. “We want to make this neighborhood safer for the people who aren’t involved.

“A lot of the people who live here are good people.”

Winfree was a part of a recently expanded Community-Oriented Policing and Problem Solving Team assigned to clean up the cluster of heavily wooded residential lots north of Orange Avenue long notorious for drug sales and accompanying gun violence. The area became a target for Tallahassee Police Chief Michael DeLeo, who was hired in December and subsequently pledged to reduce gun violence in the city, which had grown to a rate-per-resident that rivaled Miami, according to a report by the Florida Department of Law Enforcement.

“The calls for service that we researched determined this was one of the areas that needed attention,” said TPD Sgt. Shane Porter, who commands the expanded branch of the COPPS team. “And since we got here in May, those calls — those complaints from the community — have dropped significantly.”

In its first two months, the COPPS Team averaged 20 arrests per week and seized large amounts of cocaine, marijuana and MDMA (commonly known as Ecstasy or Molly).

“I would say we have been very active down here,” Porter said.

A recent tour of the neighborhood with the COPPS team revealed the aggressive, yet simple approach to saturation enforcement. Officers observed drug transactions and then provided teammates with the description of suspects and vehicles. Those officers pulled over vehicles for traffic infractions and conducted roadside interviews. Officers only stopped people or vehicles that had clearly broken a law, whether it was a drug transaction or driving infraction. No guesswork was involved.

“As much as you want to make the stop, we have to respect people’s rights,” Winfree said. “Those are rights given to them by the Constitution.”

Winfree stopped an Acura sedan after it ran a stop sign and a check of the driver revealed his license was suspended. This cleared officers to perform a search that turned up more than a gram of suspected cocaine. Two children, ages 3 and 5, were escorted from the back seat of the Acura and were distracted with the chance to pet a TPD police dog as officers placed the driver under arrest.

Later in the tour, another Acura was pulled over and a search turned up several small bags each containing a white powdery substance. Also in the vehicle were several pairs of cleats and a college textbook on macroeconomics.

“This was a slow night for us,” Porter said. “Compared to other nights we’ve had, this was nothing.”

The expanded COPPS team was serendipitously assigned to Texas Street the same time a new apartment manager took control of Sunrise Place. The 99-unit complex recently underwent renovations that included new windows, appliances, floors and central air systems, as well as a sophisticated network of surveillance cameras. Most of its tenants receive vouchers from the U.S. Department of Housing and Urban Development that come with rules that were only recently enforced.

“You don’t enforce the rules for many years and people start to think that’s the way to do things,” said Sunrise Place Manager Abel Reynoso. “I’m here to tell them the rules will stand.”

In just two months, arrests made by the COPPS team led to the eviction of six tenants. However, the wait list for the property is made up of relatives of those who recently were removed.

“And that’s where we deal with this as a society issue,” he said. “You can only tell them that the life they’re living is not the way to go about living.”

Sgt. Porter said his team soon will spread its enforcement efforts to other parts of Tallahassee’s Southside. Struggling areas such as the 2500 block of Holton Street were also known for drugs and shootings. For instance, the Leon Arms Apartments, which also offers Section 8 housing, was the scene of an early morning July 12 fatal shooting that occurred while young children were present. Like Reynoso, nearby business operators wish there were also more opportunities to lead troubled residents toward lawful living. On a recent Friday night, the K&S Grocery on Springhill Road was the scene of a vicious fistfight between two women. Police arrived to only find a disheveled wig left behind.

Nabulsi said most of his customers were hard workers, but he wanted others to see past the misguided dreams of life in the fast lane. His store was relatively tame during the day compared to the trouble that emerged after sundown.

The need to educate at-risk residents across Tallahassee was shared by DeLeo, who also created a Community Leadership Council on Gun Violence. The group of community leaders, business owners and clergy will meet to identify programs and solutions that lead to better decisions by residents.

However, some were more optimistic about enforcement after witnessing the COPPS Team on the city’s north side. The streets of Frenchtown once brimmed with seedy sorts fraught with violence, and TPD made somewhat of a difference.

“There were the days when I couldn’t make it on my bike without running in to someone who wanted to start something,” said Jerry Ammons, who recently moved from south Tallahassee to escape the violence. “These days, you can tell things have gotten better.”

Ammons spent a recent Friday night sipping coffee from the safety of a West Pensacola Street convenience store and shared accounts of his life in the Southside.

“If they clean up the Southside the same way, I think that would be great.”

Sgt. Porter said the original COPPS team will remain in Northside neighborhoods such as Frenchtown, and his group will cover the Orange Avenue corridor.

State Attorney Willie Meggs has spent the majority of his life as a Leon County law enforcement official and recalled the days when doors were never locked. But the city has since grown up, and its two universities and community college now attract up to 80,000 college students every semester. This provides opportunities for criminals to prey on the young temporary population — and each other — just to make an easy buck.

“It happens all the time.”

Also, as Winfree observed in the online videos from Texas Street, law enforcement is rarely respected.

“I don’t know how to overcome that — except for enforcement.”