Outdoor living spaces can be many things: a patio, a deck, a covered porch (screened or not) or a pavilion. A pergola, however, can transform your outdoor space into an oasis like no other.

What exactly is a pergola? At its most basic, it is a free-standing, open-sided structure with a top of parallel cross beams. But there are a lot of variations on that theme.

For example, a structure attached to a house or outbuilding on the property is a sort of pergola, even though only three sides are open.

A seating area framed by four beams and covered with a shade cloth instead of parallel beams on top is generally considered a “hybrid pergola.” Some people consider a shade sail, a triangular-shaped cloth suspended by three hooks high above the seating area, as a form of pergola — although purists would scoff at that idea.

So what exactly are the advantages of a pergola over other types of landscape shade structures? It depends on what you want.

Compared to a gazebo or pavilion — which are fully roofed, stand-alone structures in the landscape — a pergola’s “open weave” roof offers more access to breezes. Coastal areas get far more breezes than inland areas such as Tallahassee, so capturing every bit of breeze that’s out there is a blessing in the Capital City during our North Florida summers. It’s pretty nice at the coast, too.

If a space that offers protection from the sun and rain is your goal, a gazebo, a pavilion or a covered porch might be a better option.

However, if just reducing the amount of sunlight is your goal, while keeping as much air movement as possible, a pergola could be the answer. The parallel beams across the top don’t fully block the sun, but they block enough to reduce the heat to the seating area below. Given the additional airflow, it’s a trade-off. 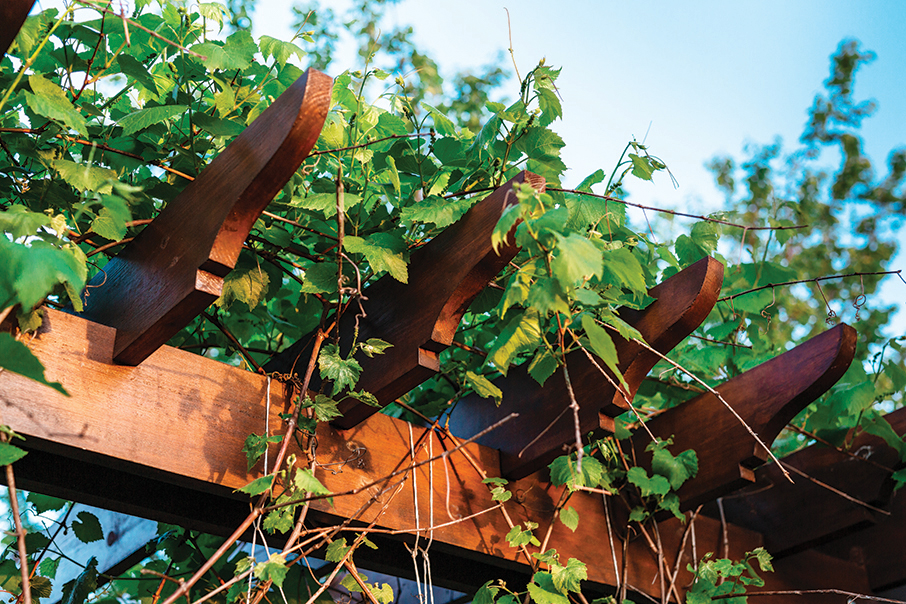 While the physical attributes of a pergola are many, the mental and emotional benefits can be even greater.

“A pergola helps create a quiet space, an intimate space,” said Ralph Esposito, whose company builds outdoor living spaces as well as operating a garden center. “We build a lot of pergolas on top of wide-open, concrete patios in the backyard, and once they’re built, your whole focus changes.”

Pergolas also offer a place for plants to climb the vertical supports. Whether flowering vines, such as honeysuckle and Confederate jasmine, or edibles, such as grapes and kiwis, climbing plants help create a sense of enclosure and privacy.

Some pergolas attract lots of stuff. They are for their owners like empty closets that demand utilization. So it is that those climbing plants may be joined by plants potted and hanging and by outdoor furniture, a gas grill, a dartboard, a mini-fridge, a big sticky black ball that attracts yellow flies and one of those mesh enclosures with butterfly pupae inside.

Others may be bereft of trappings and activity, like treehouses after the children fledge.

A pergola that lies between those extremes can be a place that “pleasantly slows the world down a little bit,” Esposito said.

Given the lockdowns and social distancing necessary over the past few months because of the coronavirus, some might wonder whether the world has slowed a little too much. But it has been a slowing of an unrelaxed sort. Mental health experts find that the world’s problems are weighing on us more heavily now than ever. Our isolation offers scant distraction from them.

Perhaps a lounge chair beneath a pergola, with a soothing wind chime pealing comforting tones, can provide an antidote.

Wight of the Living Dead