They were here. They had the priests. But did Spanish conquistador Hernando de Soto really celebrate the first Christmas in North America? 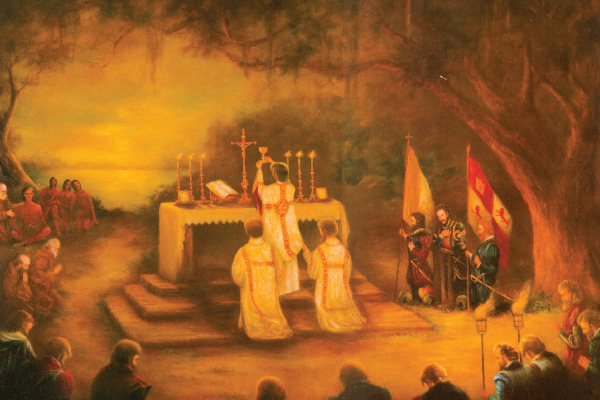 This depiction of America’s first Christmas was painted in 1975 by local artist Claribel Jett. Based on what was known at that time, she envisioned the event occurring near Lake Jackson.

The idea that Spanish conquistadors celebrated the first Christmas in North America in Tallahassee has been part of the city’s folklore for a quarter of a century. Ever since 1987, when the late Calvin Jones and a team of volunteers discovered artifacts dating to the 16th century near the historic Gov. John W. Martin house, the image of Spanish conquistadors enjoying the first “merry Christmas” in the New World has been a playful subject for reporters and visitor guides.

However, the actual history is cloudy at best. There really isn’t any documentation backing up the legend, according to state archaeologist Mary Glowacki of the B. Calvin Jones Center for Archaeology. All we have is conjecture and supposition.

“I imagine that they did, but there is absolutely no mention of it,” Glowacki said. “We don’t have any historical documentation for it, but we do know there were a number of priests that were part of the expedition, and that they did bring all the required items, vestments and so on to be able to perform mass.”

Spanish explorer Hernando de Soto and his 600-man army occupied the principal Apalachee village, Anhaica, from October 1539 to March 1540. The natives, dispossessed of their homes and food by the Spaniards, didn’t take kindly to the strangers and ambushed them constantly during this time.

“The first Christmas Mass celebrated in La Florida could not have been a very festive one,” wrote anthropologist Charles R. Ewen in his 1998 book, “Hernando de Soto Among the Apalachee: The Archaeology of the First Winter Encampment,” which was co-authored by noted historian John H. Hann.

On the record, de Soto and his men spent their Christmas (which, according to archaeologists, would have fallen on Dec. 15) basically trying to stay alive. Indeed, Rodrigo Ranjel, de Soto’s personal secretary, recorded that the Apalachee burned the settlement at least twice and killed many of the Spaniards.

“They were essentially under siege the entire time,” Glowacki said.

Even if they hadn’t been busy warding off attackers, 16th century people just didn’t place the same emphasis on Christmas that we do today. The Spaniards would have treated it like any other religious observance.

“We know that many of the Spaniards who were here in the New World, whether they were in Mexico or South America, would go to midnight mass and possibly an early mass in the morning; that was pretty common,” she said. “They also recognized all the saints’ days and Easter, so it was just … a holy day of obligation. You would go to church, but there really wasn’t anything festive about it.”

There’s plenty of circumstantial evidence to support such a conclusion, Ewen said, because these were Catholics living during the Inquisition.

“Although not mentioned specifically in any of the narratives (which are all extremely sketchy concerning the in-camp events of that first winter), surely the priests conducted some sort of Christmas service for the men,” Ewen wrote. “It was, after all, the time of the Inquisition, and strict adherence to religious ceremony was observed by all Spaniards.”

If they did celebrate Christmas, it would have definitely been the first for the New World. According to Ewen, there’s no record of any other Christian expedition, with the appropriate clergy, being in the future United States before the de Soto expedition.

When springtime came, the Spaniards provisioned themselves with confiscated Apalachee corn and headed north. Their decision was based on native stories of gold smelting in Yupaha, a settlement north of Apalachee.

To commemorate the mass likely said at the camp, the Trust for Public Land sponsored a Christmas service at the site on December 20, 1987.

An intriguing development in the de Soto saga recently occurred in Central Florida, where some compelling new artifacts have been found on private property in northern Marion County. Copper Spanish coins, rosary beads, bits of chain mail and a pig jaw have been found at this site and point to the possibility of another de Soto encampment, and perhaps the location of a mission site from a later period as well.

Glowacki said the finds are tantalizing, but she wants to see better data. “My jury is still out. If it’s true, it’s an incredible discovery,” she observed.

However, several red flags pop up in her mind when she considers the artifacts in question. The copper coins, chain mail fragments and pig jaw are in remarkable condition considering the site’s sandy, acidic soil doesn’t lend well to preservation, she said. Pigs are an important indicator because de Soto brought a herd with him on the expedition. These are said to be the first pigs in North America.

“Nobody’s saying (the relics) are not authentic, it’s just … odd,” she said. “Here, our clay environment preserves better than the sandy soil down there.”

As was the case with the Tallahassee site in 1987, the news media have jumped on this new finding, proving that once again, people remain fascinated with de Soto.

“There’s something about de Soto that just intrigues people,” Glowacki said. “That’s the potential of archaeology. You never know what you’re going to find.”

Archaeologist B. Calvin Jones was a digger with a talent for reading the landscape. If there was a lot being cleared somewhere in Tallahassee, the developer could expect Jones to drive up in a pickup with shovels in the back and start asking questions.

That’s basically how the de Soto winter encampment was discovered. In 1987, Jones, an archaeologist with the Florida Bureau of Archaeological Research, was driving along Lafayette Street when he noticed some land being cleared for an office development near the historic Gov. Martin House.

The rest is history. Discoveries made there of ancient Spanish artifacts and the significance of the site led the developers, the Tallahassee Development Corporation and Mad Dog Construction, to sell the property to the state, according to Mary Glowacki, state archaeologist and bureau chief of the Florida Bureau of Archaeological Research.

Jones died from cancer in February 1998 after some 30 years of service but remains a legendary figure with an impressive record
of discovery.

“He worked for the bureau for quite a long time, since at least ’68, and he was involved in numerous sites,” she said. “He seemed to have a real gift for reading the landscape and identifying where sites would be located. That’s a gift. Not many archaeologists can do that really well.”

Jones discovered one of the more famous Paleoindian and early “Archaic” sites, the Harney Flats, down in Hillsborough County when a segment of the Interstate 75 corridor was being surveyed. He also did extensive work at Wakulla Springs Lodge and found an early Paleoindian presence there as well. And, one of his duties while working for the BAR was to locate and identify Spanish mission sites that had been known only from the historical record.

His reputation and discoveries were significant enough that when the Florida Bureau of Archaeological Research moved into the Governor Martin House in 2005, the residence was co-named the B. Calvin Jones Center for Archaeology in his honor.