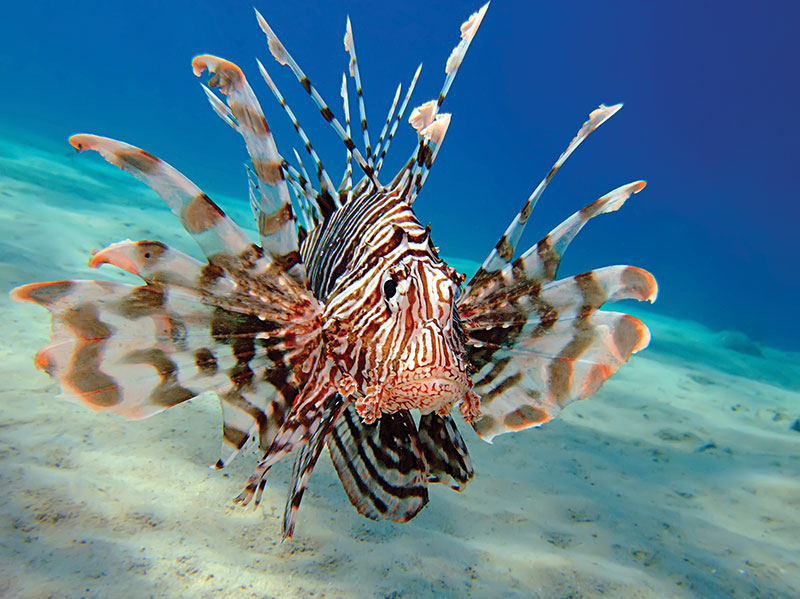 A guest who overstays his welcome is irksome. A non-native species that settles in can be downright dangerous.

When an exotic plant or animal arrives on the scene, it may turn out to be harmless or even beneficial. Citrus trees, for example, are not native to Florida, but they’ve become one of the state’s most important and iconic natural resources. However, species are considered invasive if they are likely to cause harm to the environment, the economy or humans. The introduction of invasive species disrupts Florida’s ecosystem and can lead to a loss of biodiversity.

Here are a few invasive species that have spawned concerns in Florida.

Lionfish are known for their flashy stripes and venomous spikes. While they look pretty in a saltwater aquarium, they are unwelcome in Florida waters.

Lionfish arrived off Florida’s Atlantic coast in 1985. With no natural predators and a voracious appetite, they have wreaked havoc on the environment. For example, their consumption of algae-eating species leads to an excess of algae, which can smother and kill coral reefs. Not only does this harm the sea creatures that rely on the reef, but it also affects the countless people who depend on this ecosystem for their livelihood.

Legislation was introduced beginning in 2012 to help control the lionfish population. Limits on lionfish hunting were removed; importation and breeding (except for scientific purposes) were banned.

In May 2014, the FWC introduced the Report Florida Lionfish app, which enables divers to report lionfish sightings and removal. In May 2015, the commission unveiled the new Reef Rangers program. It allows people to adopt a reef and care for it year-round by removing lionfish. Studies show that continued removal in a specific area has a positive effect.

Nalley said that of all the recent changes regarding lionfish, the most noticeable difference is awareness.

“A lot of people don’t know anything about it other than seeing it in an aquarium,” she said.

That’s why the FWC declared the first Saturday after Mother’s Day to be Lionfish Removal and Awareness Day. This year, the commission hosted a festival in Pensacola. About 3,000 people attended the event, which included a lionfish removal tournament, kid-friendly activities and even chef demonstrations. Recently, the FWC floated the idea to allow divers to take an extra lobster during the mini-season — if they removed 10 lionfish while they were at it.

Lionfish have venomous spines, but the flesh is not poisonous — in fact, many say it’s delicious. Tallahassee’s Sage Restaurant serves this flaky white fish when it’s available from local divers, creating dishes including Lionfish and Chips.

The two most destructive termite species in the world have begun mating in Florida. The result is a hybrid “super-termite” more destructive than either of its parents.

Every year, the Formosan termite and the Asian termite cause an estimated $40 billion in damage worldwide. Originally from China and Southeast Asia, the two species traveled in cargo holds to other parts of the globe. One of the few places where the climate is just right for both of them is Florida.

The species evolved separately for hundreds of thousands of years, but researchers believe unusually warm winters in 2013 and 2014 disrupted their mating patterns. The Asian termite usually mates in February, the Formosan in April; it appears that climate change may be causing their swarming seasons to overlap. This leads to interbreeding because male Asian termites prefer female Formosans. In fact, in lab experiments, the Asian males completely ignored the females of their own species in favor of the Formosans.

Experiments also show that, separately, each species produces about 80 offspring a year. When interbreeding, they produce nearly twice as many.

Researchers are still unsure if the hybrids will be able to reproduce. But even if the termites are sterile, a colony of millions can live up to 20 years. This poses a serious threat to homeowners. Scientists predict dramatic increases in damage. And although the habitats of the Asian and Formosan termites are limited, this hybrid may be able to tolerate climates from North Carolina to Brazil.

One of the largest snakes in the world, the Burmese python has been a popular pet. Though it’s now illegal to import pythons into the United States or transport them across state lines, a large population exists in South Florida. Sightings have been reported in Everglades National Park since the 1980s. It’s also likely that many more pythons were introduced into the wild when a breeding facility was destroyed by Hurricane Andrew in 1992. Those spotted outside of South Florida are escaped or released pets.

The species has been successful for two main reasons. First, the average adult Burmese python caught in Florida measures 6 to 9 feet in length, larger than other native snakes. The largest python captured in Florida was over 18 feet long and weighed 150 pounds. Because of their large size, adult Burmese pythons have few predators. 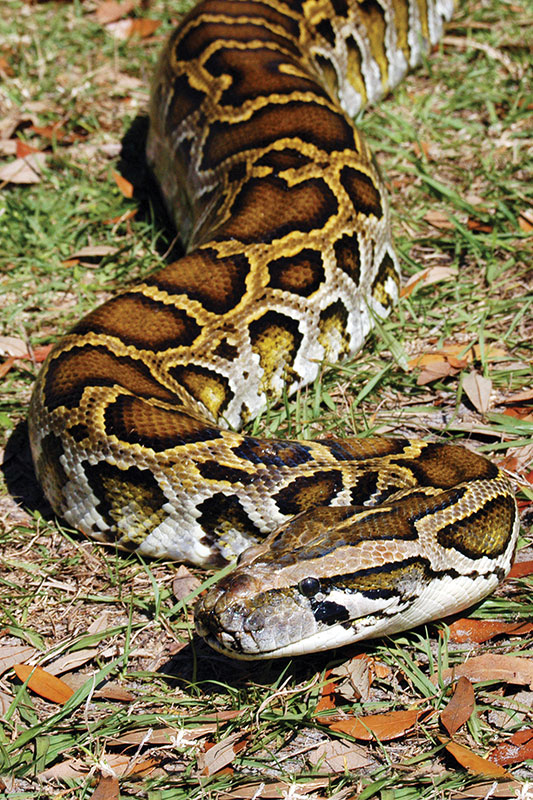 Second, they also have flexible dietary needs and prey upon a variety of native species — birds, mammals and even alligators — and some endangered animals. Pythons also occasionally prey on cats and dogs.

In 2013, the first Python Challenge was held in the Everglades, designed to protect native wildlife by removing pythons. At the most recent event, 1,600 registered competitors gathered in the swamp and removed a total of 68 Burmese pythons. This month-long competition will be held again in early 2016.

According to Bill Caton, leader of the FWC’s Invasive Plant Management Section, the most troublesome upland plants in the Tallahassee area are Chinese tallow, Chinese privet and coral ardisia. These plants spread rapidly and outcompete native plants.

Chinese tallow, a tree cultivated in eastern Asia for its seed oil, was a popular ornamental plant in Florida because of its fast growth rate, vivid colors in autumn and resilience against pests. Until recently, the invasive tree could be purchased at nurseries. Its leaves and fruit cause nausea and vomiting in humans and are toxic to cattle.

Before Chinese privet was discovered to be a harmful invasive plant, it was widely used as an ornamental shrub because of its ability to tolerate poor environmental conditions. These perennial plants can reach 16 to 20 feet in height. Though it is an invasive weed, it is still available for purchase and is used in landscaping.

Coral ardisia, also known as the Christmas berry, is an ornamental shrub native to Japan and northern India. It gained popularity in Florida because it is low maintenance and produces attractive coral-red berries. Its seeds are spread by birds and raccoons, and it can even re-sprout after a fire.

The best way to control the spread of invasive plants is to avoid planting them. Caton stressed the importance of awareness. Some non-native ornamental plants are harmless, but others are not, so always be aware of what you’re introducing into the environment.

Caton says the invasive aquatic plants that have the biggest effect on the Tallahassee area are water hyacinth, water lettuce and hydrilla. Possession of these plants is illegal without a permit.

All three of these plants lower oxygen levels in the water and crowd out other species, often eliminating other plants and animals from the ecosystem. Infestations block waterways, so boat traffic and recreational use is disrupted. The restricted water flow can lead to flooding. Dense populations also provide the perfect breeding ground for mosquitoes.

Water lettuce forms dense mats of “rosettes of fuzzy-soft, pale-green leaves,” according to the FWC’s website. With the ability to double its population size in three weeks, the plant can survive in freezing temperatures and drought.

Hydrilla, also known as Indian star-vine, was originally intended for decorative use in aquariums. Its stems can be more than 35 feet long, with white flowers and whorls of pointed leaves. Hydrilla was introduced to Florida in the 1950s by an aquarium dealer. When it was dumped into a waterway near Tampa, it spread rapidly throughout the state.

These aquatic invasives are under maintenance control: “We stay on top of plants and don’t let them get too far out of control,” Caton explained. By nipping the plants in the (literal) bud, the FWC can use smaller amounts of herbicide and avoid killing non-target plants. It’s more efficient and cost effective. “Would you rather treat an area the size of a desktop or an acre?” Caton asked.