Can you name all seven of Tallahassee’s downtown parks? If so, you’re unusual. Many people don’t realize that there are seven parks, or that each is named for an individual. Originally the strip that encompasses the parks was a 200-foot wide buffer zone surrounding the city and intended to protect the residents from the Indians in the area.

At that time, it was simply a wide road meandering among groves of trees and through small open patches of land, but it eventually became the hub of a growing city and played a dominant role in its development.

The northern boundary of what was once known as Two Hundred Foot Street remains today as Park Avenue, lined with governmental and commercial buildings, churches and so many historic houses that it has been placed on the National Register as the Park Avenue Historic District. 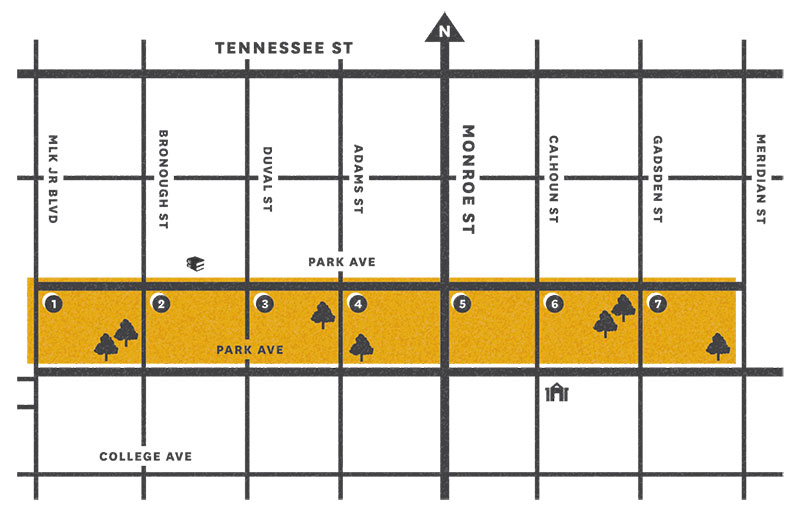 The three center parks — Leon, Bloxham and McCarty — have always been prominent in Tallahassee’s public life, while the eastern and western portions evolved into residential neighborhoods of distinctly different characteristics.

Until 1905, Two Hundred Foot Street was officially called McCarty Street, when it was renamed Park Avenue, although the only part of the strip that actually served as a park was Lewis Park, known at that time simply as “The Green.”

It was on The Green, beneath the same majestic live oak tree still standing, that the daughters of prominent Tallahassee residents celebrated May Day, complete with a dance around the May Pole, and vied with each other for the honor of being crowned the May Queen.

The western edge of the park area once was designated as a public burying ground, and although it has long since been purchased by both the city and St. John’s Episcopal Church, it remains as Tallahassee’s oldest cemetery. It holds a cross-section of the city’s inhabitants, ranging from governors to slaves, and includes the graves of some 200 Confederate soldiers. An obelisk in the Episcopal Cemetery marks the graves of Napoleon’s nephew, Prince Achille Murat, and his wife, Catherine.

Until the 1880s, there were no formal parks in the city of Tallahassee. However, when the old Leon Hotel was planned, the builders decided to construct a park opposite the hotel, and they named it Leon Park. This was the beginning of Tallahassee’s downtown park area.

In 1885, Capt. William C. Lewis, a prominent resident whose mansion fronted the 200-foot-wide strip, asked for and obtained permission from the City Council to plant a second park opposite his home. The park was 340 feet long and 120 feet wide on each side, with a drive 40 feet wide bordering it. It was the plan for Lewis Park that established the pattern for the rest of the downtown parks that followed.

A group of local women, headed by Genevieve Randolph, formed the Tallahassee Improvement Association in 1891 and within the next 10 years had planted and named five more city parks along what was once McCarty Street.

The first park, between Gadsden and Meridian streets was named for Mrs. Randolph; the next park, between Calhoun and Monroe streets, honored William D. Bloxham, a Tallahasseean who had served two terms as Florida’s governor in the late 19th century; and the last three parks were named Lafayette (between Adams and Duval streets), Cherokee (between Duval and Bronough streets) and Duval Park, which lies between Bronough and Boulevard streets. The work of the Tallahassee Improvement Association was carried on by the Tallahassee Woman’s Club and by the Tallahassee Garden Club. In 1938, in cooperation with the city, these groups permanently named and planted all seven of the downtown parks.

Leon, Lewis, Bloxham and Randolph parks all retained their original names, but the three western parks were renamed. One was named for the first Secretary of the Florida Territory, William M. McCarty; the second, for E. Peck Greene, a longtime leader in the city’s beautification efforts; and the third park was named Cherokee in honor of that variety of rose.